The Liberals continued to hold a lead in March as their numbers stabilized after months of oscillation back and forth. Only three polls were in the field nationally last month, and one in Quebec, but nevertheless over 10,000 Canadians were surveyed on their voting intentions. 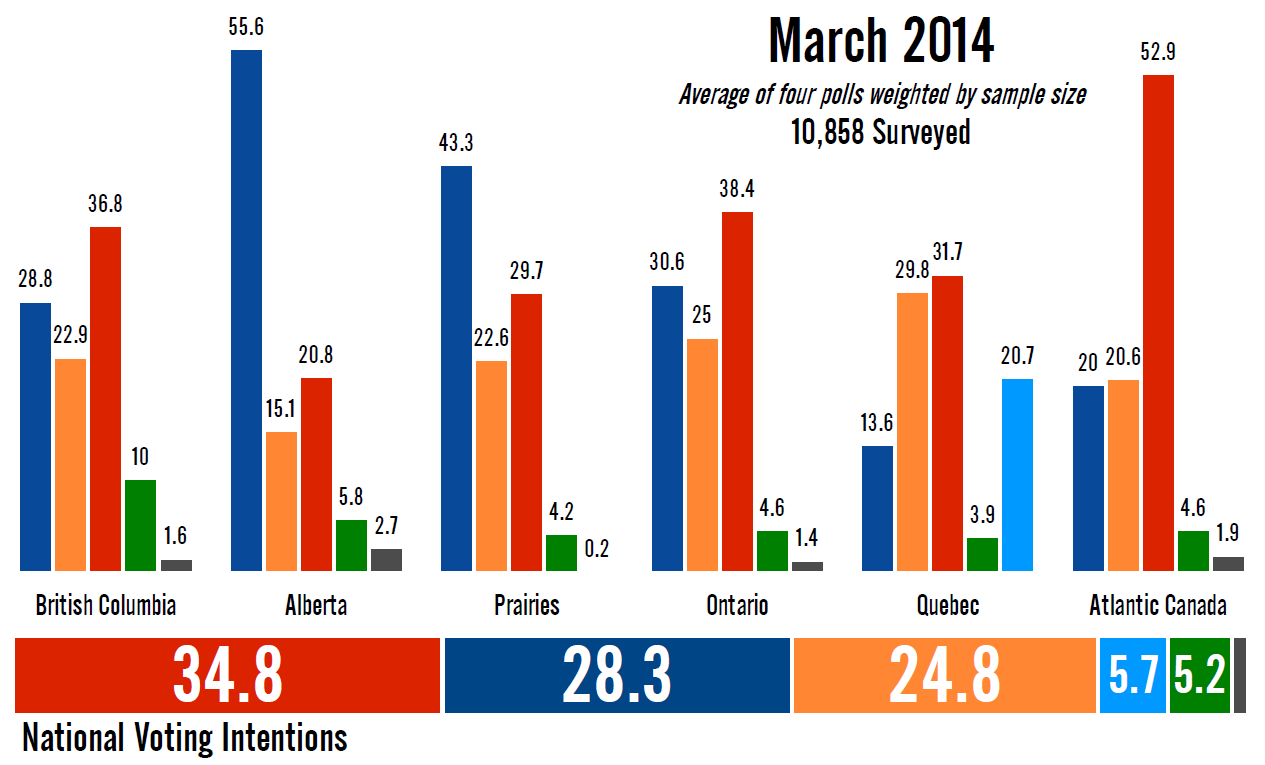 The Liberals averaged 34.8% support in March, down 0.2 points since February. This marks three consecutive months in which the party has been in a narrow one-point band, the first time that has happened under Justin Trudeau. In fact, the Liberals had not even managed to hold their numbers steady for two months before 2014.

The Conservatives were down 0.4 points to 28.3%, making that six consecutive months in which the Tories have been registered at under 30% support. The New Democrats were up 0.6 points to 24.8%, their best result since September 2013, continuing a positive three-month trend for the party.

In British Columbia, the Liberals picked up 6.6 points to reach 36.8% in March, their best result on record going back to January 2009. The Conservatives were down 1.3 points to 28.8%, while the NDP dropped 6.3 points to 22.9%, its worst result since March 2011. Considering these extremes, the month was more likely an anomaly than anything significant. The Greens were up 0.8 points to 10%.

In the Prairies, the Conservatives managed their best result since June 2013 with a 3.4-point gain to 43.3%. The Tories have picked up support in Saskatchewan and Manitoba for three consecutive months. The Liberals were down 3.4 points to 29.7%, and the NDP was up 1.2 points to 22.6%. The Greens were unchanged at 4.2%.

Quebec - in the midst of a provincial election campaign in March - had the Liberals down 1.1 points to 31.7%. The New Democrats put up their best numbers since before Trudeau became Liberal leader, with a gain of 1.2 points to 29.8%. They have been experiencing a positive trend for four months (the NDP was at just 25% in November). The Bloc Québécois was down 1.7 points to 20.7%, while the Conservatives were at their highest since March 2013 with a 0.9-point gain to 13.6%. The Greens were also up 0.9 points, to 3.9%. 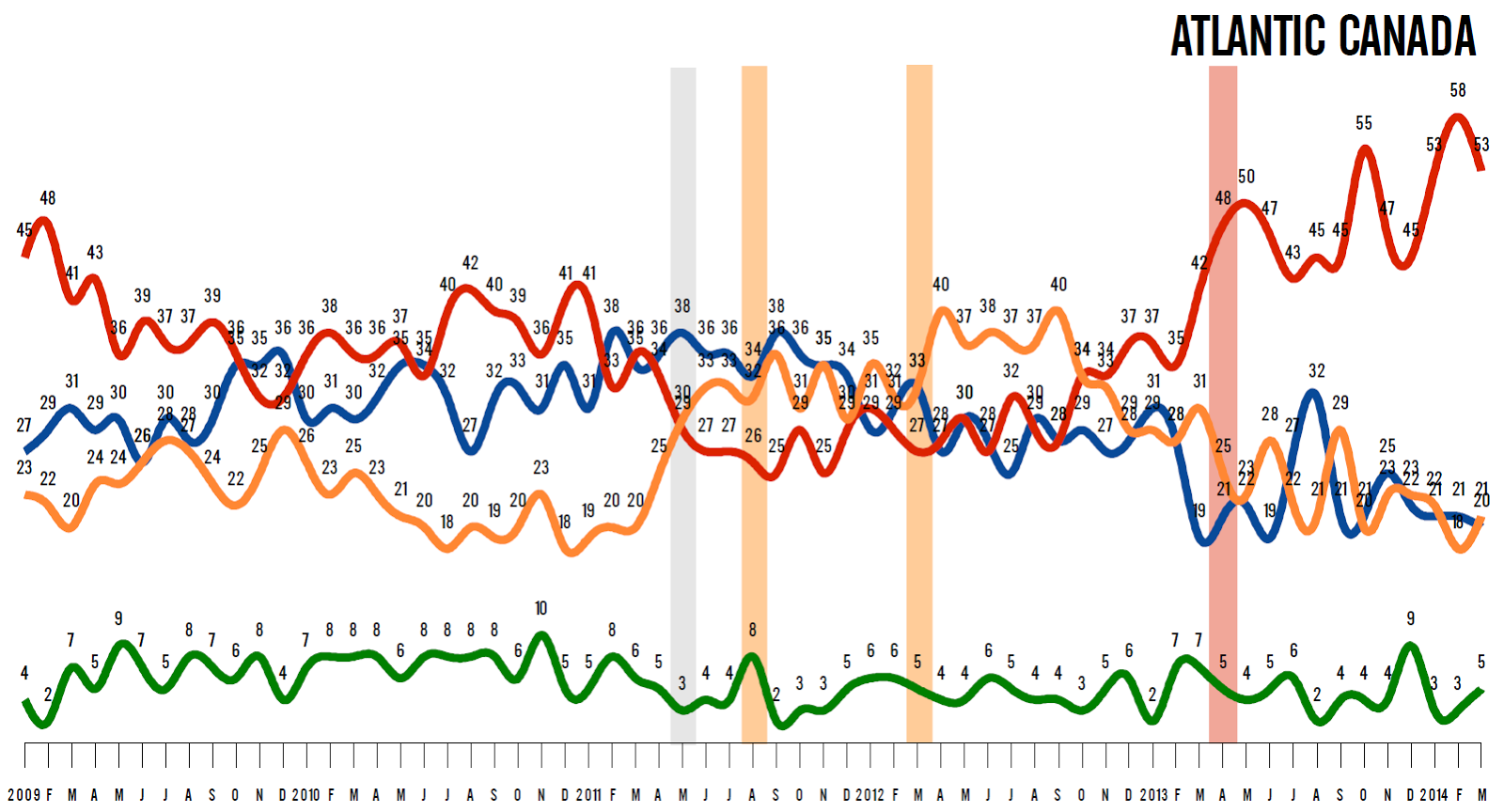 The chart above shows the effect that Trudeau has had on politics in Atlantic Canada. Since he became leader in April 2013, the Liberals have managed 50% or better in five of 12 months, and have never been lower than 43% or held a lead of less than 13 points. Both the Conservatives, who last held a consistent lead in 2011, and the New Democrats, who were ahead after Thomas Mulcair became leader, have taken a hit.

With these levels of support, the Liberals would likely win around 137 seats, up four since February's projection. The Conservatives dropped one seat to 120, while the New Democrats were up three to 76. The Bloc Québécois would likely win three seats, a decrease of six from February, while the Greens would win two.

The Liberals make their biggest gain in Ontario, up eight seats to 61 thanks to the margin between their party and the Conservatives increasing by almost five points. The Liberals would also pick up two seats in British Columbia compared to February, but were down one each in Quebec and the Prairies and four in Alberta.

The Conservatives gained eight seats in all in the West (one in the Prairies, three in B.C., four in Alberta) but were down nine in Ontario.

The New Democrats were up seven seats in Quebec to 43, and one seat in Ontario, but dropped five in British Columbia.

Mostly stable numbers across the board. That is not a bad thing for the Liberals, as the longer they remain in the lead the harder it will be to budge them from it. The New Democrats are showing a little life in Quebec, which is good news for them, and remain in the game. The Conservatives still appear unable to turn things around. With 18 months to go before the next election, that is not an enviable position to be in.
Posted by Éric at 9:45:00 AM