A contest of regions

In my column for the CBC today, I look at the latest numbers from the projection, which was updated late yesterday afternoon. Please check it out.

Those are the macro numbers. What about the micro numbers?

I thought it would be interesting to break the projection down to the sub-regional level to try to get an understanding of how things are playing out. Seeing the numbers in Ontario, Quebec, and British Columbia are fine - but these provinces are far from monoliths. In fact, every province is.

What I've done below is use the riding-by-riding projections to get an estimate of regional support. But pay attention, as there are some caveats.

This is not the same as the polling averages for these regions, but rather how the national polls translate into regional support levels. So, it is not necessarily reflective of how things are really looking in every part of the country. What it tells us instead is that, based on wider trends, these are how these regions are likely playing out. It is meant to give us a general idea, rather than a specific measure of public opinion.

In effect, it is using the projection model to project regionally, rather than by riding. But it isn't as simple as swinging the national polls and their provincial breakdowns to the regional level, as the riding projections take into account incumbency and the like. If a region has seen a lot of incumbents retire, that has an effect that a simple swing would not capture. By-elections, too, are also part of the equation.

As to the definitions of the regions, I used the ones presented here on Wikipedia. It is perhaps not a perfect division of the country (I would have done some of these differently), but it is good enough. Let's get to it.

Starting in British Columbia, the Conservatives are strongest in the B.C. Interior, where the New Democrats are running a decent second. The Tories are also ahead in the Fraser Valley and the Southern Lower Mainland, but here it is the Liberals who are running a close second.

The only regional lead the New Democrats hold in British Columbia is Vancouver Island, where they are narrowly edging out the Conservatives. But look at the Greens here - they are certainly in the race in this part of the province.

Alberta is far more complicated than the wide lead the Conservatives hold would suggest. Certainly the Tories are ahead through the province. But that leads runs from a very comfortable 46-point edge in rural Alberta to a slimmer margin of 13 points in Calgary.

The Liberals are clearly running second in Calgary by this measure, but are in a closer race with the New Democrats in and around Edmonton. 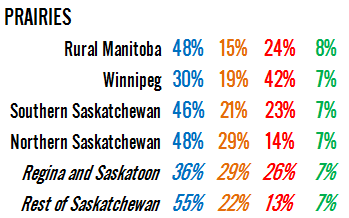 The definitions that Wikipedia had for the regions of Saskatchewan were not very satisfying, and I suspect they are a relic of the old urban-rural seats the province used to have. With their definitions, the Conservatives lead in both the south and the north, with the Liberals and NDP in a close race for second in the south (which includes Regina) and the NDP ensconced alone in second place in the north (which includes Saskatoon).

A more reasonable regional breakdown would be between rural and urban Saskatchewan. What I have done here is define Regina and Saskatoon as the six ridings with those cities in their names. When we do that, we see the race is much closer, with the Conservatives narrowly ahead of the NDP and the Liberals not too far behind. In the rest of Saskatchewan, the Conservative lead is not challenged. 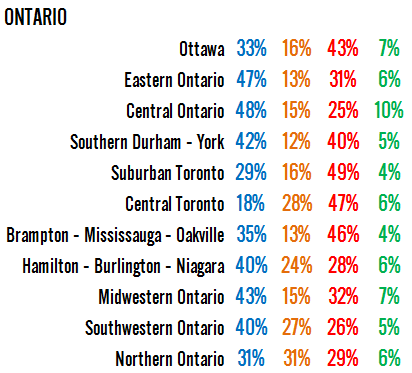 The Ontario numbers are interesting in that they show the wide regional variations that exist in the province, with 30 points separating the best and worst performances for the Conservatives, 24 for the Liberals, and 19 for the NDP.

The Liberals have the edge in Ottawa, suburban Toronto, central Toronto, and Brampton - Mississauga - Oakville. Only in central Toronto do the New Democrats supplant the Conservatives for second place.

The New Democrats are only in first place, and in this case they are tied with the Tories, in northern Ontario. And even there the Liberals are only two points behind.

Southern Durham - York is a close race between the Liberals and Conservatives. 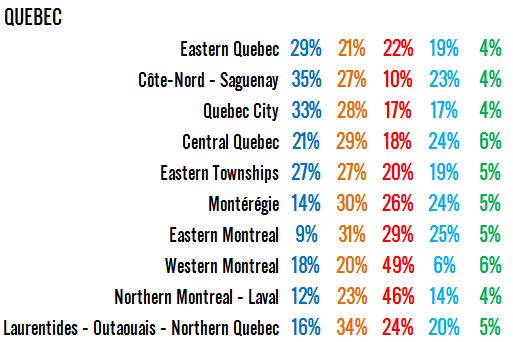 The problem for the Liberals in Quebec is demonstrated by this breakdown. Though they lead province wide, at the regional level that translates only to a lead in western Montreal and northern Montreal - Laval.

They are also in a close race with the New Democrats in eastern Montreal and Montérégie, south of the metropolis.

The NDP's support is relatively uniform, and in a divided landscape they are ahead in central Quebec and Laurentides - Outaouais - Northern Quebec. In the Eastern Townships they are neck-and-neck with the Conservatives.

The Tories have the edge in eastern Quebec, Côte-Nord - Saguenay, and Quebec City, generally where they are expected to pick up seats. Their lead in eastern Quebec is a bit distorted by the region stretching to the south shore to Lévis.

Finally, the Bloc Québécois is ahead nowhere in the province, though is not far behind in central Quebec, eastern Montreal, and the Montérégie.

The Wikipedia regional definitions for Atlantic Canada don't go beyond the provincial level, so these numbers aren't as useful. We sometimes get provincial breakdowns in the polls anyway. But as a proof of concept, it works as the numbers generally line-up with what the polls are showing in each of these provinces.

The Liberals lead in all four, but have a closer race in New Brunswick, where the Conservatives are strongest.

And in New Brunswick, the Liberals would be ahead in the urban ridings (Fredericton, Moncton, Saint John) with 43% to 31% for the Tories and 17% for the NDP, with the margin narrower in the rest of the province, with 40% for the Liberals and 32% for the Conservatives to 19% for the NDP.

Looking at the map this way, we get a different picture of the electoral race. Simplified, there are three battleground provinces: British Columbia, Ontario, and Quebec. But breaking it down by region, we see that there are many more battlegrounds.

The Liberals and Conservatives are fighting over the Fraser Valley and Southern Lower Mainland in British Columbia, Calgary in Alberta, Winnipeg in the Prairies, the outlying areas of the GTA in Ontario, and New Brunswick in Atlantic Canada.

The Liberals and NDP are contesting central Toronto and northern Ontario, as well as the francophone areas around Montreal and St. John's in Newfoundland and Labrador.

The NDP and Conservatives are at odds too, over Vancouver Island (where the Greens are also present), urban Saskatchewan, southwestern and northern Ontario, central Quebec and Quebec City.

And some parts of the country, particularly in Quebec but also parts of Ontario and British Columbia, have areas where three (or four!) parties can pose as legitimate winners.

It makes for a complicated electoral map - one that we usually only get to see from 30,000 feet. Zoom in and the picture gets fuzzier, but an impression of how things are lining up can be seen.
Posted by Éric at 11:37:00 AM