Quarterly check-in with the premiers (updated)

Yesterday, Angus Reid released the results from their quarterly polling on the approval ratings of Canada's premiers. As usual, Brad Wall of Saskatchewan topped the list while Manitoba's Greg Selinger, after almost losing his job in a leadership vote, was at the bottom. But the poll did have some interesting findings - namely that two of the premiers heading to the polls this year have decent numbers and that, for the most part, premiers are unpopular.

Update: It was indeed a typo, but Gallant's DK was 10 points too high, rather than his disapproval rating. It has been fixed below. Angus Reid caught it earlier, but the wrong version of the PDF was still in my cache. Apologies. Before we get into the poll, a note on the numbers for Brian Gallant of New Brunswick. In Angus Reid's poll, the numbers for Gallant added up to 110%. I corrected this in the chart below by reducing Gallant's disapproval rating by 10 points, which aligns more closely with Angus Reid's previous poll. This would mean his 43% disapproval was a simple typo, and should have been 33%. I have checked with Angus Reid and will update once I have the correct numbers. 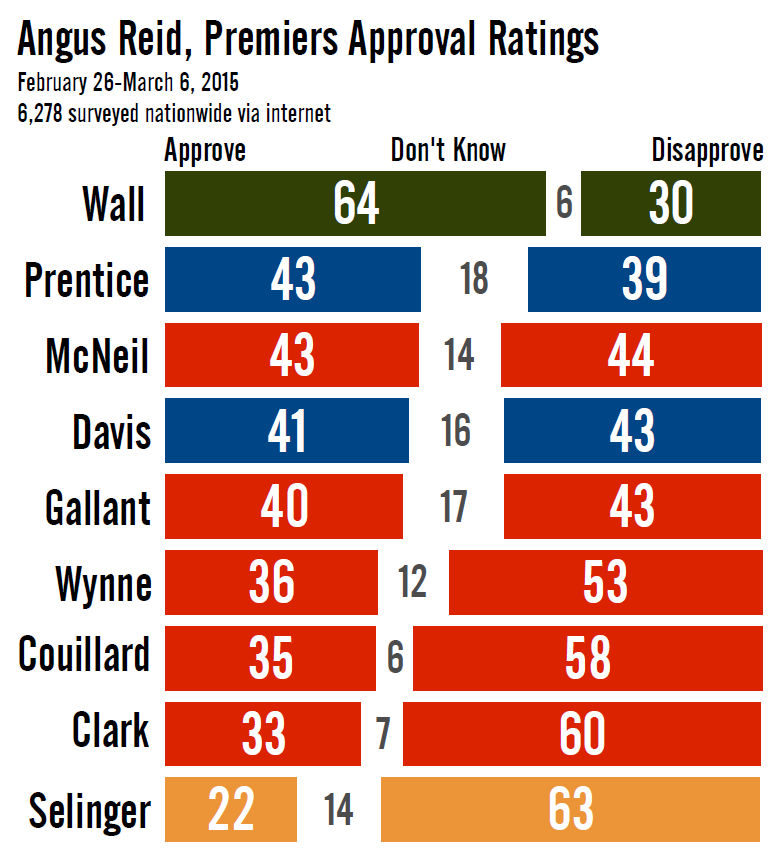 Let's start with the two premiers who will be asking for a mandate of their own this year (Wade MacLauchlan of Prince Edward Island is the third, but Angus Reid does not include the province in its poll - with good reason, as even with a sample of 6,278, PEI's share of that would represent just 27 respondents).

Jim Prentice of Alberta registered an approval rating of 43%, representing a drop of seven points for the PC leader since the last quarter. His disapproval rating was up six points, to 39%.

That is not a positive trend for Prentice, but with the divided opposition he faces he can easily win with 43% support. In fact, Alison Redford took 44% of the vote when she won the 2012 election, so Prentice appears in a good enough position.

And with a new rating of +4, Prentice is one of only two premiers with a net positive score.

Paul Davis of Newfoundland and Labrador had similar numbers to Prentice, with 41% approval and 43% disapproval. That is a sharp improvement for Davis, who had an approval rating of just 34% last quarter. His disapproval rating, however, was also up, by six points.

The issue with Davis is that in a three-party system where the third party may take just 10% of the vote, 41% would not be enough to win. And the polls by the Corporate Research Associates show that satisfaction with the PC government in the province is relatively high - and yet, the governing party is trailing in the polls at a great distance. It is almost as if Newfoundlanders and Labradorians have gotten over the anger they felt with the Dunderdale administration, but still want a change. That will be tough for Davis to overcome.

Two premiers have a year to go before the next election in 2016, and they could not be any more different.

Wall topped the list yet again with an approval rating of 64% and a disapproval rating of 30%, the highest and lowest scores, respectively, in Canada. His net rating is a remarkable +34, the best by a wide margin. And that 64% approval, in fact, matches the share of the vote his party took in the 2011 provincial election. He would seem to be in fine form to secure re-election, which no one doubts at this stage.

His numbers have slipped a little, as they have dropped for three consecutive quarters. But the shifts have been marginal, and he has a lot of room to fall before he has to worry.

At the opposite end of the spectrum is Selinger, who found himself at the bottom of the list again. His approval rating stands at just 22%, with disapproval at 63%.

That is an improvement for Selinger, who was at just 17% last quarter, but it still makes for the two worst quarters for the NDP premier in Angus Reid's polling. It spells doom for his party's re-election chances, and that is part of the reason he almost lost a leadership vote a few weeks ago. His net rating of -41 is the worst in Canada, again by a wide margin.

The other premiers on the list are at least two years away from having to face the voters, so this poll is more of a mid-term check-up.

Gallant has rather mixed numbers for a newly-elected premier, at 40% approval to 43% disapproval. His disapproval rating is up rather sharply.

The two central Canadian Liberal premiers, Kathleen Wynne of Ontario and Philippe Couillard of Quebec, are seeing their numbers turn a little sour.

Wynne's approval rating has dropped over two quarters now to 36%, with her disapproval rating at 53%. Her net rating is a poor -17. But this negative trend is lessened somewhat by the fact that Wynne's numbers are now more or less back to normal, after experiencing a post-election bump.

Couillard might be a little more worried, with an approval rating of 35% and a disapproval of 58%. That represents a drop in his approval worth six points, and his net score of -23 is the lowest in Canada with the exception of Selinger and Christy Clark of British Columbia. Coupled with a new poll out today from CROP showing his party dropping to just 29% support, Couillard seems to be experiencing the same post-election slump that Jean Charest went through when he first became premier in 2003.

Finally, Clark's numbers are holding steady with 33% approval and 60% disapproval, though that is a far cry from the post-election honeymoon of a 45% approval rating that Clark had in 2013. Only Selinger's net rating is worse than Clark's -27. But she doesn't have to face the electorate until 2017. Of course, poor approval ratings are certainly something she is familiar with and, undoubtedly, it probably doesn't scare her after the 2013 experience.

What does this mean? Are we just poorly served by our leaders, or are Canadians so polarized that many find it hard to support a leader for whose party they did not vote? In no province does the current approval rating of the premier stand at a higher level than the share of the vote that premier's party took in the previous election. In Quebec, British Columbia, Manitoba, and Newfoundland and Labrador it is significantly lower than the bar set by the last election.

Perhaps it isn't a sign of a serious problem with our leaders or our politics, but rather a case of the grass always being greener on the other side of the fence. One hopes our collective psyche is not as simple as that.
Posted by Éric at 10:22:00 AM