A tale of two leadership races

The two largest opposition parties in Canada's two largest provinces will be choosing new leaders in May. The front runner in the campaign to replace Pauline Marois as leader of the Parti Québécois is clear, and all metrics agree on who it is. But the race to replace Tim Hudak as leader of the Ontario Progressive Conservatives should be a much easier call than what it is turning out to be.

I wrote about some other leaders today in my column for the CBC, breaking down the approval ratings of Stephen Harper, Thomas Mulcair, and Justin Trudeau. Check it out here.

There are three candidates in the PC leadership contest. Christine Elliot is an MPP in the GTA and a former leadership contestant, the best known of the three in part because she is the widow to the late Jim Flaherty. Patrick Brown is an MP from Barrie, and before this contest very few people had ever heard of him. The same goes for Monte McNaughton, an MPP from southwestern Ontario.

Since the beginning of the race, I have been tracking endorsements. It is a way to determine who is the favourite of the party establishment, and more often than not it tracks the outcome relatively closely. By this measure, Christine Elliott is the consensus choice. 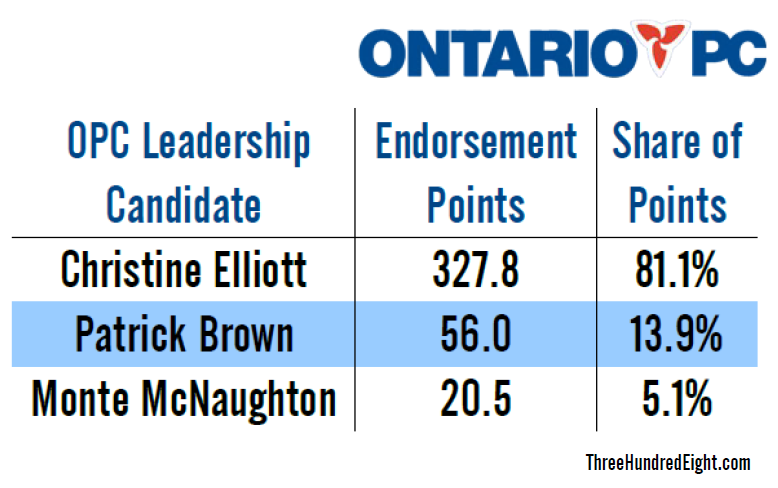 She has garnered 81% of the endorsement points my system awards, giving her an insurmountable lead. Her list of endorsers includes former premier Bill Davis, two leadership candidates who dropped out of the race (Lisa MacLeod and Vic Fedeli), and long-time MPPs like Ted Arnott, Ernie Hardeman, Norm Miller, Julia Munro, and Laurie Scott. She also has some of the higher profile Ontario MPs on her side, including Chris Alexander, John Baird, Peter Kent, Kellie Leitch, Rob Nicholson, and Lisa Raitt.

Running second in the endorsement rankings is Brown, with 14% of available points. He has only a few caucus endorsements, the longest serving being Toby Barrett. He has some Ontario MPs on board, including Mark Adler, Paul Calandra, Rick Dykstra, and Bal Gosal. Jean Charest, former Quebec Premier and, more importantly in terms of the endorsement system, former leader of the federal Progressive Conservatives, has also endorsed him. Brown boasts the endorsements of some famous hockey players, including Wayne Gretzky, but the endorsement system does not take those into account, as they have no role within the party.

In third is Monte McNaughton, with 5% of the endorsement points. His list of endorsements is quite short, the only other caucus member being Bob Bailey. McNaughton also has the endorsement of former Toronto mayor Rob Ford, though again that is not one considered by the system. 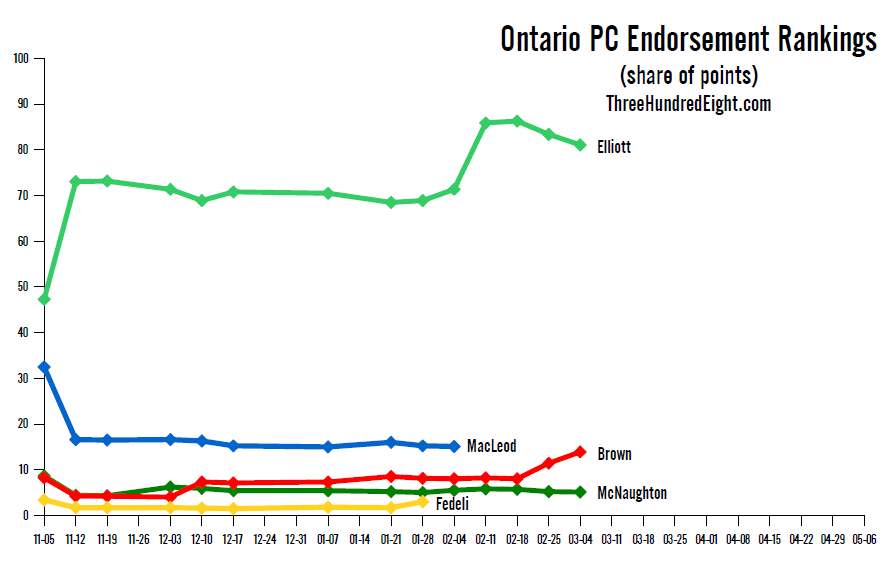 It would seem to be a very cut-and-dry race, then. Elliott is the candidate the party wants to win, and normally we would expect the membership to follow suit. This was the case when Justin Trudeau won the federal leadership of the Liberals in 2013.

And it appears to be a very successful one. The period for signing up new members just recently came to a close, and the Brown campaign claims to have signed up 40,000 new members. That is a huge number, considering that at the start of the campaign the PCs had just 10,000 paid-up members.

Reports of the number of members signed up by Elliott and McNaughton differ. One source told the media that Elliott signed up just 13,000 new members, though the Elliott campaign denies this and claims that number represents less than half of the total.

(Just speculating, but 13 and 30 sound a lot alike. Perhaps the source merely misheard?)

McNaughton claimed some 20,000 new members, though that same source put the number instead at around 6,000.

If all of those members vote (or at least all vote in the same proportions), and if the 17,000 original and non-aligned members vote according to the breakdown of the endorsement rankings, we would end up with Elliot at 51% on the first ballot (assuming Fedeli's and MacLeod's members go with her), Brown at 42%, and McNaughton with 7%.

While that would point to a win by Elliott, there are a lot of assumptions being made to give her that razor-thin victory. If she falls short of the 50% mark, she and Brown would be in a near tie. It follows that McNaughton's supporters would go to Brown, who appears to be campaign to the right of Elliott (and McNaughton to the right of both).

There's the problem for Elliott. In a three-way race, she might have difficulty winning if she doesn't get to 50% on the first ballot, or at least very close. A lot depends on how effective Brown's campaign really is.

But numbers are not the only factor in this race. Members need to be distributed efficiently across the province, since each riding is awarded points according to how many members are in it. So, it all depends on how those members are spread out. It makes it a very difficult race to call.

That leaves us with the inevitable conclusion that the endorsement rankings system will not be a good reflection of the eventual outcome. All it can do, at this point, is give an indication of who the party establishment wants to win. If Brown pulls it off, he will have done so against the wishes of the party's elite.

A mercifully easier campaign to call in Quebec

The race in Quebec is much more straightforward.

There are five candidates in the PQ's contest. Topping the list is Pierre-Karl Péladeau, newly elected MNA in 2014 and a media mogul. Alexandre Cloutier, Bernard Drainville, and Martine Ouellet are all MNAs as well, and sat in Marois's short-lived cabinet. Pierre Céré is in the bottom tier. He ran for the PQ in the last election and was defeated. 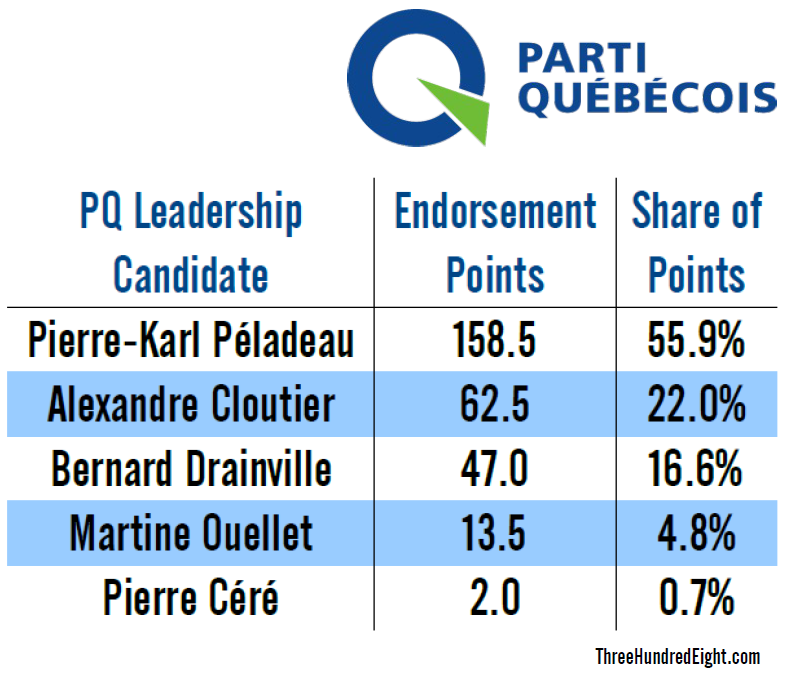 In this race, the endorsement rankings follow nicely with the general perception of the campaign.

Second in the ranking is Cloutier with 22% of the endorsement points. His most important caucus support is François Gendron, who was first elected in 1976. Véronique Hivon, who was considered a potentially strong leadership candidate before the race started, is also with him. Well-known former MNAs like Louise Beaudoin, Léo Bureau-Blouin, and Louise Harel have endorsed Cloutier.

Not far behind with 17% is Drainville, who has a number of caucus members including Guy Leclair, Carole Poirier, and Mathieu Traversy.

Ouellet has 5% of the endorsement points, all coming from former MNAs. Céré has 1%, and all of his endorsers come from the Bloc Québécois. 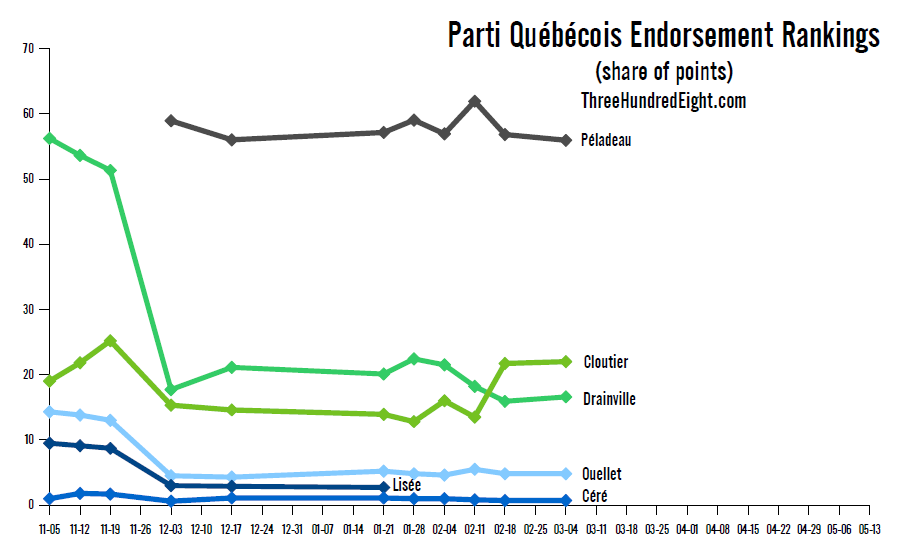 But whereas the PC race's endorsements do not seem to reflect the reality on the ground, the rankings for the PQ contest do seem to be closer to the mark. Take, for example, fundraising.

Péladeau has so far raised about $114,000 (consider that fundraising rules in Quebec are far more restrictive than in Ontario, where Elliott apparently has raised over half-a-million dollars), roughly half of all of the money raised by the contestants still in the race.

If those totals represented votes, Péladeau would take about 49%, followed by Drainville and Cloutier at 17% each, Ouellet at 12%, and Céré at 5%. Those numbers are not too different from the current endorsement rankings, though it would suggest Ouellet is somewhat under-estimated.

There are still some two months left to go, but it would seem Péladeau will win. If he doesn't take more than 50% on the first ballot, he is likely to come close enough to get over the mark by the third ballot (Céré, dropping off first, would likely not have enough votes to get him over the mark on the second). That the party has not settled on the consensus alternative helps his case, but it could be a closer result than one would expect. Ouellet and Céré, campaigning on the left, are unlikely to see a lot of their supporters going to Péladeau, boosting either Drainville or (more likely) Cloutier. If Péladeau ends up with less than 45% on the first ballot, I could see it getting to a head-to-head finish.

In the end, the details of the outcome looks more like trivia. The real contest to watch will be in Ontario.
Posted by Éric at 10:43:00 AM