Landslide in store for the next province to hit the hustings

A new premier, taking over a party that has a stranglehold on the legislature, will likely seek a mandate of his own this spring. Against him will be a trio of rookie opposition party leaders, who will be going on the hustings for the first time themselves.

The Official Opposition leader will have the least amount of time for voters to get to know him, as the party was the last to fill the slot. And the party has had a very tough time. Since the last election, the caucus has been reduced significantly due to floor-crossing and the departure of its leader, who could no longer sit with her party in the legislature. It's been a whirlwind few years in Charlottetown.

Wait, did you think I was talking about Alberta?

Why no, this political drama has been taking place in Canada's littlest province!

Some background before we get to the latest numbers from Prince Edward Island:

That new premier is Wade MacLauchlan, who was just a few weeks ago named as former premier Robert Ghiz's replacement. His party took 22 of 27 seats in the 2011 provincial election, leaving the Progressive Conservatives under Olive Crane to provide a tiny opposition (to put it into perspective, a similarly sized opposition in the House of Commons would have 57 seats).

The Tories have been in turmoil for most of the last few years. Crane announced she would resign as leader at the end of 2012, and MLA Hal Perry took over Official Opposition duties. But then Steven Myers won the interim leadership in early 2013, and for a confusing few days Perry wanted to stay as opposition leader as Myers ran the party. That didn't last very long, and by the end of the year Perry crossed the floor to the Liberals and Crane was booted out of the party and has been sitting as an independent ever since.

Rob Lantz was named the new leader of the PCs on February 28, and will be one of four rookie leaders in the upcoming campaign. Mike Redmond will be leading the NDP and Peter Bevan-Baker will head up the Greens. In 2011, the leaders of these respective parties had been James Rodd and Sharon Labchuk. 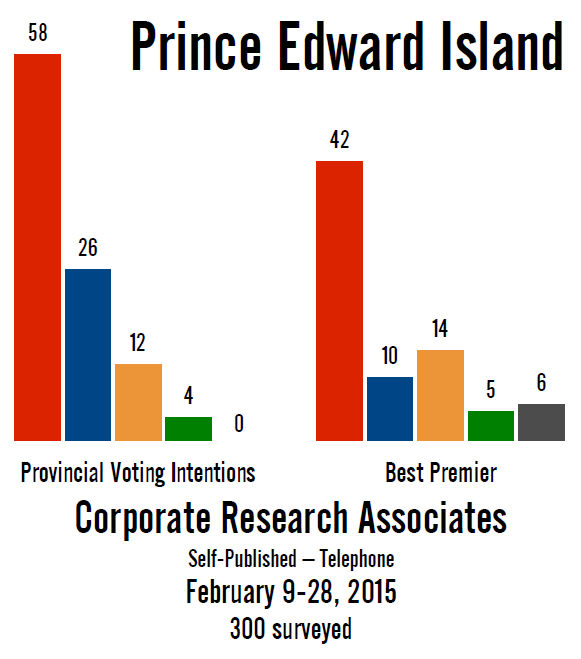 The new poll by Corporate Research Associates shows that the Liberals are doing very well under MacLauchlan (though he was named Liberal leader on February 21, late into CRA's polling dates, nominations closed at the end of January and MacLauchlan was the only candidate). The party led with 58% support, up eight points since CRA's previous survey of Nov. 5-25.

The Progressive Conservatives were up slightly by three points to 26% (their numbers are pre-Lantz), while the NDP and Greens were down three and seven points to 12% and 4%, respectively.

Nevertheless, this is the best number the Liberals have put up in any poll since August 2011, just before the last election. And this after a period of stability, as the party was polling between 48% and 53% between November 2013 and November 2014. Indeed, with only a few exceptions, the party has barely wavered from the 50% mark since the last vote. 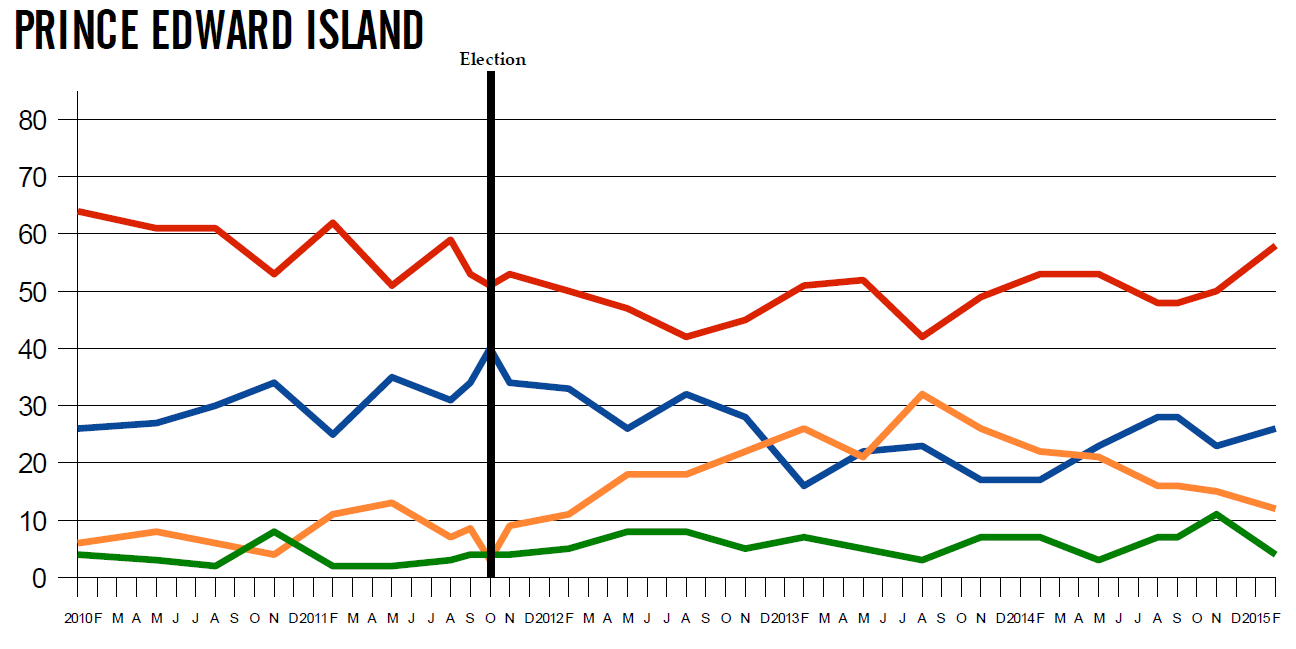 For the Tories, their results are par for the course as the party has been polled at between 23% and 28% since May. It will be interesting to see what effect Lantz has on the numbers. He takes over a party that is in better shape than it was in 2013 and early 2014, when the New Democrats were in second place.

The NDP has been steadily dropping, however, and this latest poll is their worst since February 2012.

The Greens were at an anomalous 11% in November, so the drop of seven points is somewhat exaggerated. Normally, the party polls between 3% and 7%, so they are well-within those levels.

With such a wide lead over the opposition, MacLauchlan would preside over another landslide if an election were held today. He'd likely win 25 seats, with the Tories taking the other two. Again, to put that into perspective, that is the equivalent of a government winning 285 seats in the current 308-seat House of Commons, with the opposition winning the remaining 23.

On who would make the best premier, MacLauchlan was well ahead with 42%, one point up on Ghiz's performance in November and better than any numbers Ghiz managed since the last election. Myers, in his last poll as interim leader, was at just 10%, while Redmond was at 14%. That was a drop of three points and his lowest number as NDP leader.

Prince Edward Islanders seem satisfied with the government, with 44% saying they are completely or mostly satisfied, compared to 30% who are dissatisfied. The remaining 26% aren't sure, an understandably big jump from 8% in November considering the change in leadership.

So MacLauchlan stands a strong chance of securing a mandate of his own when the next election is called. The wildcard will certainly be Lantz, who has a chance to give the Tories a fresh face and a new start. With so few voters in the province to persuade (75,000 in 2011), dramatic swings can easily occur. But the hill may be too high to climb for Lantz in such a short time.
Posted by Éric at 9:54:00 AM