Uptick in Alberta for Mulcair's NDP?

The federal projection has been updated, incorporating the latest polling data from EKOS Research, Léger, and CROP. The overall results have not shifted much, though the Conservative seat count has dipped to the benefit of the Liberals. You can see all the details here.

An interesting development does seem to be underway in Alberta, however, where the New Democrats are polling at their highest level in a year. Is the NDP on the upswing in the province for real? 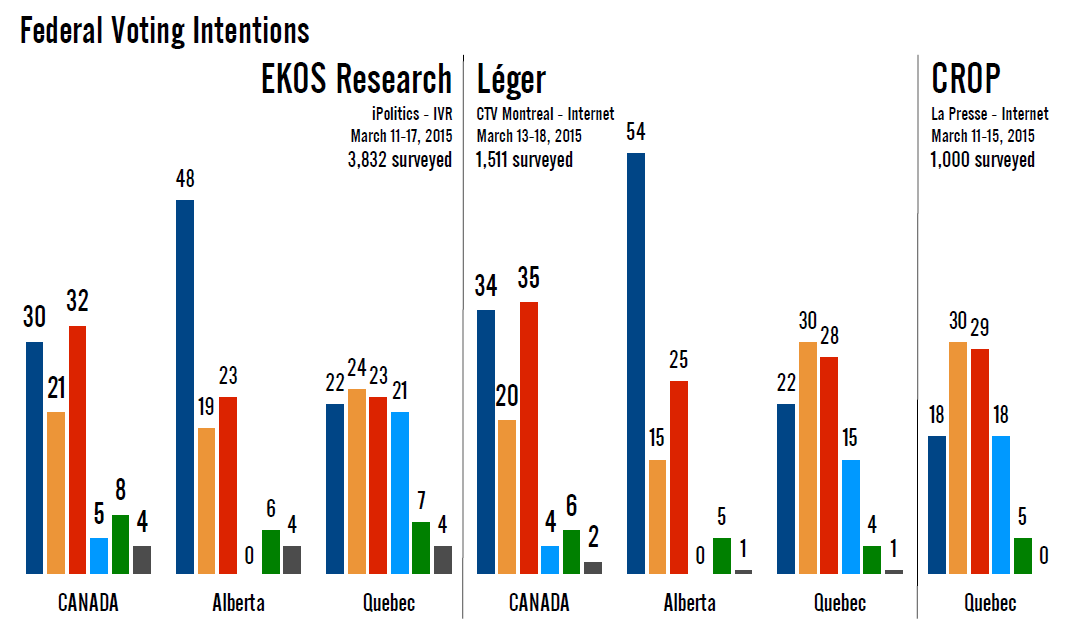 First, let's briefly go over the new polls added to the model.

Only the Conservative decrease was outside the margin of error, though the Liberal bump does end a losing streak for the party. Overall, however, the poll is well within EKOS's usual range.

The Léger poll reported by CTV Montreal showed a similarly close race, with the Liberals at 35%, the Conservatives at 34%, and the NDP at 20%. Compared to Léger's previous poll of Jan. 30 to Feb. 2, the Liberals held firm, the Tories were up two, and the NDP was unchanged. Suffice to say, those shifts would not be outside the margin of error of similarly sized probabilistic samples.

Finally, the poll by CROP for La Presse gave the New Democrats the lead in Quebec with 30%, unchanged from CROP's previous two surveys in the province. The Liberals dropped four points to 29%, while the Conservatives were up two points to 18% and the Bloc Québécois was up one point to 18%.

None of these shifts would be statistically significant. Noteworthy, however, is that the Liberals have dropped in two consecutive surveys (from 37%) while the Conservatives have increased their support over that time (from 13%). Also note that the results from CROP are broadly in agreement with those from Léger for the province.

The longest and largest streak (both in real terms and proportionately) in the country currently belongs to the New Democrats in Alberta. Their numbers have been increasing over five consecutive weeks in the province, from 11.9% at the beginning of February to 16.3% in today's update. That is a gain worth 4.4 points, or an increase of more than one-third since that low ebb. 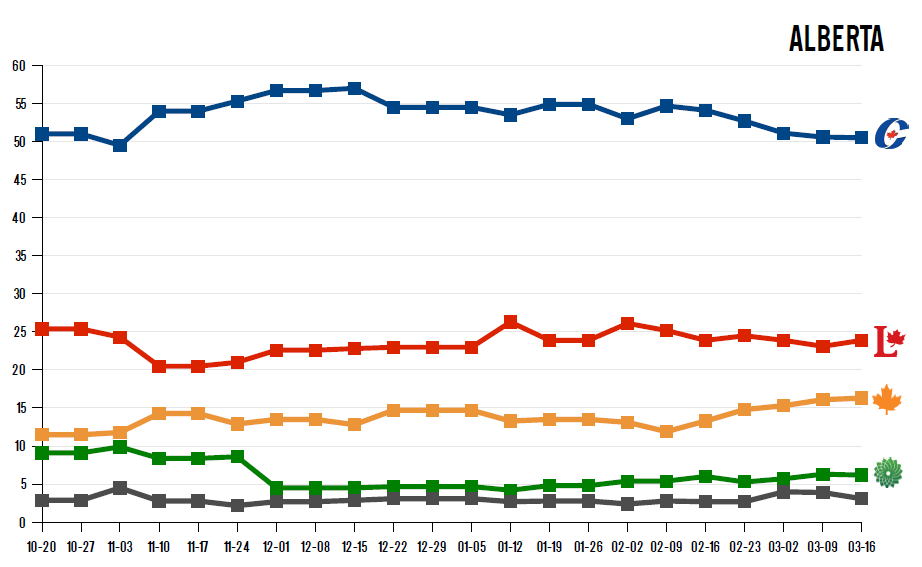 This upswing for the NDP in Alberta has coincided with a period of Conservative decline, as the party has slipped 4.2 points over the last five weeks from 54.7% to 50.5%.

(The third-longest streak at the moment is in Quebec, where the Liberals have fallen over four consecutive weeks from 30.3% to 27.7%.)

This jump for the NDP has pushed the party to two seats in the projection (Edmonton Strathcona and Edmonton Griesbach, though the latter is by a very slim margin). It has also put the New Democrats in play in Lethbridge.

The shift has been registered in most polls. In the two newest surveys, Léger has the NDP up five points in the province and EKOS has them up almost 10 points since the poll it conducted at the same time as Léger's last outing. Over the last eight polls, the NDP has managed between 13% and 19%. In the previous eight, that range was from 10% to 17%.

Whether or not the increase has come directly from the Conservatives is harder to determine. In those same most recent eight polls, the Conservatives have ranged between 49% and 54%. In the previous eight, that range was 47% to 61%. That suggests the Tories' numbers have just become more volatile, rather than necessarily dropping in the face of NDP gains.

The reality is rarely ever linear, and in this instance we may be seeing voters heading in every direction, the net result being an NDP uptick.

But why would this be taking place? We cannot definitively chalk it up to an improved performance by Thomas Mulcair, whose personal numbers in Alberta show no such clear trend line as those of his party.

We instead might be seeing a bit of cross-pollination between the provincial and federal scenes. Talk in Alberta is about the possibility of the New Democrats, under new leader Rachel Notley, taking over from Wildrose as the Official Opposition after the next election. The better press for the provincial NDP may be having a positive impact on the federal party.

The real question, as is always the case, is whether or not these numbers will prove to be sustainable or a mere flash in the pan. In the grand scheme of things, it does not have much impact on the national portrait. But with the race looking as close as it is, even losing an extra seat or two to the NDP in Alberta can have an important effect on the Conservatives' electoral calculations.
Posted by Éric at 11:01:00 AM