The quest for official party status

The Greens are looking to make a splash in 2015. This past weekend, Les coulisses du pouvoir on Radio-Canada interviewed the appropriately named Daniel Green, who is one of the Green Party's deputy leaders and, apparently, the man who will lead the Greens' campaign in Quebec.

In that interview, Green acknowledged that the party won't form government. But with enough MPs (Green speaks of five to seven), it could hold the balance of power.

Coupled with the EKOS poll from last week that had Green tongues (and perhaps Daniel Green's as well) wagging, I took a look at the Green Party's chances in British Columbia in 2015 for my CBC column this week. Check it out.

Here, I thought we should take the exercise a little further and identify the ridings the Greens should be targeting to reach the 12-seat mark generally required to obtain official or recognized party status in the House of Commons. And while we're at it, let's look at the seats the Bloc Québécois needs to target to reach that same level.

These seats were identified by using the seat projection model's current levels of support, and increasing those levels of support proportionally throughout Canada. So, for example, doubling the Greens' support in British Columbia is worth more than, say, Quebec. I was also agnostic about where the Greens' new found support would come from, with other parties dropping proportionately to their current standing.

I've separated the Green list of 14 seats (two extras for good measure) into four tiers of winnable seats. Note that the percentages listed are those for the new electoral boundaries.

The riding of Thunder Bay - Superior North (Bruce Hyer's) is not included in this list, because on paper it is not a winnable one for the Greens. Hyer may single-handily win the riding, but that is the kind of thing the model will miss without some riding-level polling.

An honourable mention should also go to the riding of Fredericton in New Brunswick, as a Green MLA was elected within it last year. That means a critical mass of voters willing to vote Green, and that gives them an outside shot.

The first tier is all in British Columbia, and the three seats in it are the ones the Greens will be targeting most forcefully in the province.

Elizabeth May's riding of Saanich - Gulf Islands is first among them, of course, and she should have no problem being re-elected.

Next is Victoria, where the Greens took 12% of the vote in 2011, against 51% for the NDP. But in the 2012 by-election in the riding, the Greens captured 34% to 39% for the NDP, at a time when the NDP was polling much more highly in B.C. than they are now. The provincial Greens also elected their first MLA in a riding within Victoria's boundaries, putting it high on the list of winnable seats. Former CBC radio host Jo-Ann Roberts will be taking a run at it.

Third is Esquimalt - Saanich - Sooke, where the Greens took 13% of the vote in 2011, against 39% for the NDP. It is another riding at the southern end of Vancouver Island, where the Greens seem to have their support concentrated. Frances Litman, a photographer and former journalist with the Victoria Times-Colonist is running for the party.

The ridings in this first tier are the ones I'd expect the Greens to win if the campaign goes well for them. After this (and adding Hyer's riding to the list), we're entering into historic breakthrough territory.

Heading the list of ridings in the second tier is Yukon. The Greens took 19% of the vote there in 2011, finishing not far behind the Conservatives, who won it with 34%. Bizarrely, former Green Party of Ontario leader Frank de Jong is gunning for the nomination here. I'm not sure how much of a premium that will give him, but he will have a lot of campaigning experience. Complicating matters is that Yukon is a riding the Liberals are likely to win, considering their gains since 2011.

Next is Dufferin - Caledon, the traditionally strongest riding for the Greens in Ontario. The party took 15% of the vote there, will behind the Conservatives 59%, but again that critical mass of voters is present.

North Okanagan - Shuswap is not your normal Green riding, being in the B.C. Interior. But with 11% support in 2011, and a Conservative Party experiencing a steep dive in support in British Columbia, it is one that would be on the Greens' list if they are boosted high enough to win six seats.

Moving on, Calgary Centre is an interesting one for the Greens. The party captured 10% there in 2011, well behind the Tories, but then took 26% of the vote in the 2012 by-election. They had a good candidate in Chris Turner, who won't be back, but again we're talking about a mass of voters who have proven willing to cast a ballot for the Greens.

Back to B.C., South Okanagan - West Kootenay is in the same boat as the North Okanagan riding, requiring a big slip in Conservative fortunes.

The fourth tier has a few interesting ridings, and a few long shots.

Winnipeg Centre is one of the latter, as the Greens took just 7% of the vote here in 2011. But the NDP has fallen on hard times in Manitoba, and the Greens could potentially benefit if their campaign is going well enough.

Add another Vancouver Island riding to the list: Nanaimo - Ladysmith, which had similar numbers to Cowichan - Malahat - Langford and could fall to a hypothetical Green surge on the Island.

If the Greens have a pocket of support on Vancouver Island, they also have one in cottage country north of Toronto. Bruce - Grey - Owen Sound is a riding where the party hit double digits with 10% support, but would have a hard time toppling the Conservatives, who captured 56%. However, if the Greens are to obtain official party status they are going to have to do some unexpected things.

Like win two seats in Calgary? Perhaps not. But with 14% in Calgary Confederation in 2011, there is a base with which to work in this riding.

Last on the list is a riding that would normally be a lot higher. Vancouver Centre was one of the best ridings in the country for the Greens in 2011. They took 15% of the vote, with the Liberals winning it with just 31%. But there's the problem. The Liberals are on track for big gains in British Columbia, putting Vancouver Centre out of reach. One might suppose that if the Greens are winning a dozen seats, they are likely eating into the Liberal vote significantly in a riding like Vancouver Centre. So the riding could be higher on this list than it actually is.

The target for the Greens may not need to be as high as 12 seats. If they did hold the balance of power, they might be able to demand recognition as an official party, despite winning fewer seats than the customary dozen (they might get it either way, depending on how generous the government in power feels).

At that point, things start to become a bit more plausible. Win all of the first tier ridings, plus Thunder Bay - Superior North, take Yukon with de Jong, Dufferin - Caledon in Ontario as the tide rises, and the Greens have six seats. Far from the realm of fantasy.

It isn't impossible, but the Greens would need some serious momentum to win more than three seats (May's and Victoria, plus either Esquimalt - Saanich - Sooke or Hyer's) in 2015.

An easier road for the Bloc Québécois

The quest for 12 is a much more manageable one for the Bloc Québécois. In the end, they were victims of the first-past-the-post system in 2011 (after being a beneficiary of it from 1993 to 2008, so perhaps it was deserved) as the party captured over 23% of the vote in Quebec but won just four seats, fewer than the Conservatives and Liberals who each took less than 17% of ballots cast.

And with the province seemingly divided among four parties, the Bloc can come up the middle and win a lot of ridings with less of the vote than they had in 2011. So, that makes the Bloc's path to 12 a lot easier to map out. They just need to get over a low bar, and the luck-of-the-vote-splits will have a lot to do with it.

For that reason, I haven't split the Bloc's ridings into tiers. But here are 14 prime candidates, from which the dozen seats the Bloc needs can be drawn. 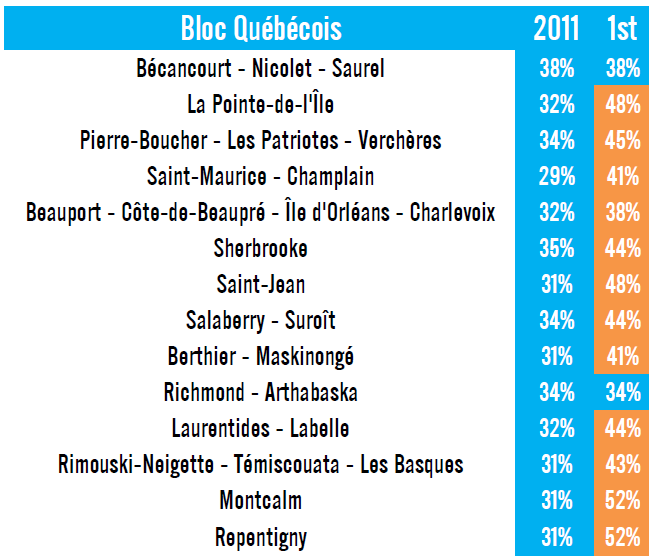 Many of the seats are located in the regions between Montreal and Quebec City.

Bécancourt - Nicolet - Saurel, held by Louis Plamondon, is the most likely to stay within the Bloc fold. Nearby Richmond - Arthabaska may no longer have André Bellavance on the ballot, but the party did win it in 2011. However, the Conservatives will be targeting this riding. Sherbrooke is also a riding that could go back to the Bloc.

On the other side of the St. Lawrence, Saint-Maurice - Champlain and Berthier - Maskinongé in the Mauricie region could be won by the Bloc, though Ruth Ellen Brosseau has done more than most NDP MPs in Quebec to ingratiate herself to the locals.

The Bloc has a few seats to target south of Montreal: Saint-Jean, Salaberry - Suroît, and Pierre-Boucher - Les Patriotes - Verchères. In all three of these, the Bloc will be facing off primarily against the NDP.

North of Montreal, seats the Bloc would be most likely to win if they are to reach 12 would be Montcalm, Repentigny, and Laurentides - Labelle. Again, their main opponent here would be the New Democrats, though the presence of a Forces et Démocratie incumbent MP in Repentigny complicates matters there.

In eastern Quebec, the Bloc could take Rimouski-Neigette - Témicouata - Les Basques and Beauport - Côte-de-Beaupré - Île d'Orléans - Charlevoix, though in the latter they will have to vie with the Conservatives as well as the NDP.

Honourable mentions in this part of the province should go to Avignon - La Mitis - Matane - Matapédia and Gaspésie - Les Îles-de-la-Madeleine, both of which the Bloc took the most votes in during the last election (the latter was won by the NDP, but with the new boundaries it goes Bloc). The first riding is an interesting one since it was won by the Bloc's Jean-François Fortin, who will be leading Forces et Démocratie and likely has a better chance to win it for them than the Bloc does.

Lastly, there is the riding of La Pointe-de-l'Île in eastern Montreal, where party leader Mario Beaulieu will be making his stand. It is a riding that wouldn't necessarily be very high on the list without Beaulieu, but we can bet that the party will be pulling out all the stops to get its leader elected.

If both did manage it, though, it would bring us back to the time of the 1997 and 2000 elections, when five parties had at least 12 seats in the House of Commons. I don't think we're quite likely to have a fully-fledged five-party system starting this year, but it is interesting that we're now in a position where that is part of the conversation.

A tangential, unlikely part. But a part nonetheless.
Posted by Éric at 10:02:00 AM