Stability in the polls, or Liberal decline?

At the moment, the only pollster giving us regular updates on the political situation in Canada is EKOS Research. The firm is reporting every week on Fridays via iPolitics. This far out from the election, the week-to-week changes have been usually quite marginal. But this may be masking a wider trend that is not a good one for the Liberals. The latest numbers from EKOS put the Conservatives ahead with 32.9% support, an increase of 0.7 points since the previous week of polling.

None of these variations were outside the margin of error. Also note that this poll has not yet been added to the projection.

EKOS's reports contain tracking data stretching back to the beginning of 2012. That gives the numbers good context, but makes it difficult to look at the week-to-week trends the pollster is recording. So let's focus on that. 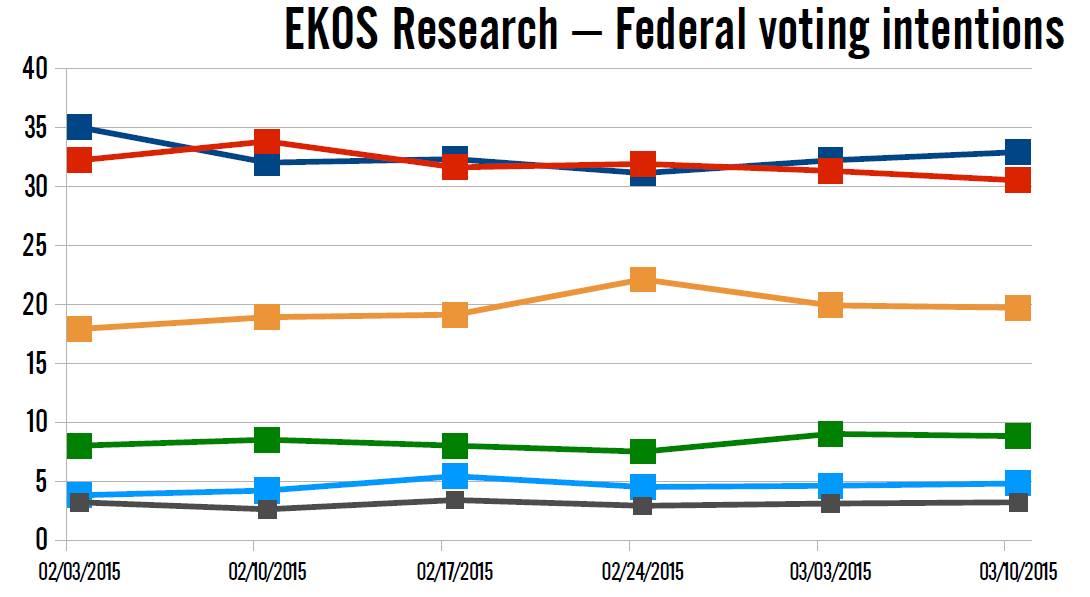 When we look at the polls over the last few weeks, it is difficult to discern any serious trends.

The Conservatives seemed to be trending downwards slightly, before up-ticking over the last two polls. EKOS's method of reporting to the first decimal point makes it look like there is more movement than there really is - if we round off those numbers as other pollsters do, the Conservatives have polled at 35%, 32%, 32%, 31%, 32%, 33%. Really not much movement there, and we can't even find a statistically significant shift between their current 32.9% and their high and low marks since EKOS began reporting weekly.

Not so for the Liberals, however. Their trend line is slightly negative starting with the poll ending on February 10, when the party was at 33.8% support. The drop of 3.3 points since then is outside of the margin of error. We could indeed be looking at an actual decrease in Liberal support over the last few weeks.

The issue, though, is that it is difficult to corroborate this with other polls as there haven't been many that have been conducted over the same time period as EKOS. What we do see is that Abacus Data recorded an uptick in Liberal support worth two points between its polls of January 26-28 and February 12-16, while Nanos Research had the Liberals down two points between its four-week rolling polls ending February 20 and February 27.

That the Conservatives are stable seems to be the consensus opinion of the polls. The question appears to be whether or not the Liberals are on the downswing.

In terms of seats, the Conservatives would win about 148 with these levels of support, with the Liberals taking 120 and the New Democrats capturing 54. The Bloc Québécois, benefiting from low NDP support in Quebec, could win about 14 seats despite having dropped more than three points in support since 2011. The Greens would win two seats.

Back to the EKOS poll itself, the only regional result worth looking at is British Columbia. Last week's EKOS poll had the Greens at 21%, and solicited some excitement on the part of Greens in the province. It also happened to have the Conservatives at just 23%.

Now, we see the Conservatives jumping 12 points to 35% and the Greens falling eight points to 13%. Both of these shifts are outside the margin of error, but it looks to me like a reset (and maybe an over-correction) rather than an actual shift in voting intentions.

Why? Take a look at the Conservatives' results in B.C. since the beginning of EKOS's weekly polling:

The result of March 3 certainly stands out from the pack. The March 10 result also stands out, but seems much more intuitive and matches some of the results other pollsters have recorded in British Columbia. It does correspond with weaker than usual numbers for the Liberals (23%, rather than the 28% to 33% recorded in earlier polls), so we could see another reset next week with the Liberals up.

Now let's look at the Greens in B.C.:

Here again, the March 3 result stands out rather dramatically. The conclusion we should reach is that, as far as B.C. was concerned, the March 3 poll was a bit of an outlier. Nothing wrong with that as it should happen from time to time, but it was a lot of fuss for not much at all.

Moving on, I though it would be interesting to note EKOS's results on support for the mission against ISIS. Overall, 60% of Canadians support the mission while 33% oppose it. But the party breakdowns shed some light on the politics of it all.

The Conservatives are safest in their robust support for the mission, as 80% of their voters are in favour of the mission. Only 16% aren't.

And the Liberals off-again-on-again relationship with the mission can perhaps be best explained by these numbers: 38% of their voters oppose the mission, while 60% support it. The party has not seemed quite comfortable with the position it took in September, and their supporters seem to agree. It will be interesting to see whether the Liberals will walk it back when the vote for renewal comes up.
Posted by Éric at 10:42:00 AM