The Alberta projection has now been updated to take into account the number of candidates each party will have on the ballot on May 5.

Only the Progressive Conservatives and New Democrats managed to nominate candidates in all 87 ridings, while Wildrose had one candidate barred from running. The Liberals came up just short of a two-thirds slate, while the Alberta Party and Greens fell well short of a 50% slate.

The projection has accordingly been adjusted to reflect these vacant spots. The Liberals have been reduced by the proportion of candidates they have on the ballot, as past experience shows that polls are largely unable to account for this fact.

The table below is a list of parties that did not run a full slate of candidates in recent elections but were nevertheless included in most polls. Parties that had a slate of at least 90% were not included, as it appears that this has little effect on the accuracy of the polls.

All of the numbers have also been rounded, because when we're looking at numbers as small as these a few decimal points can make a big difference. The issue, though, is that most polls only report whole numbers. 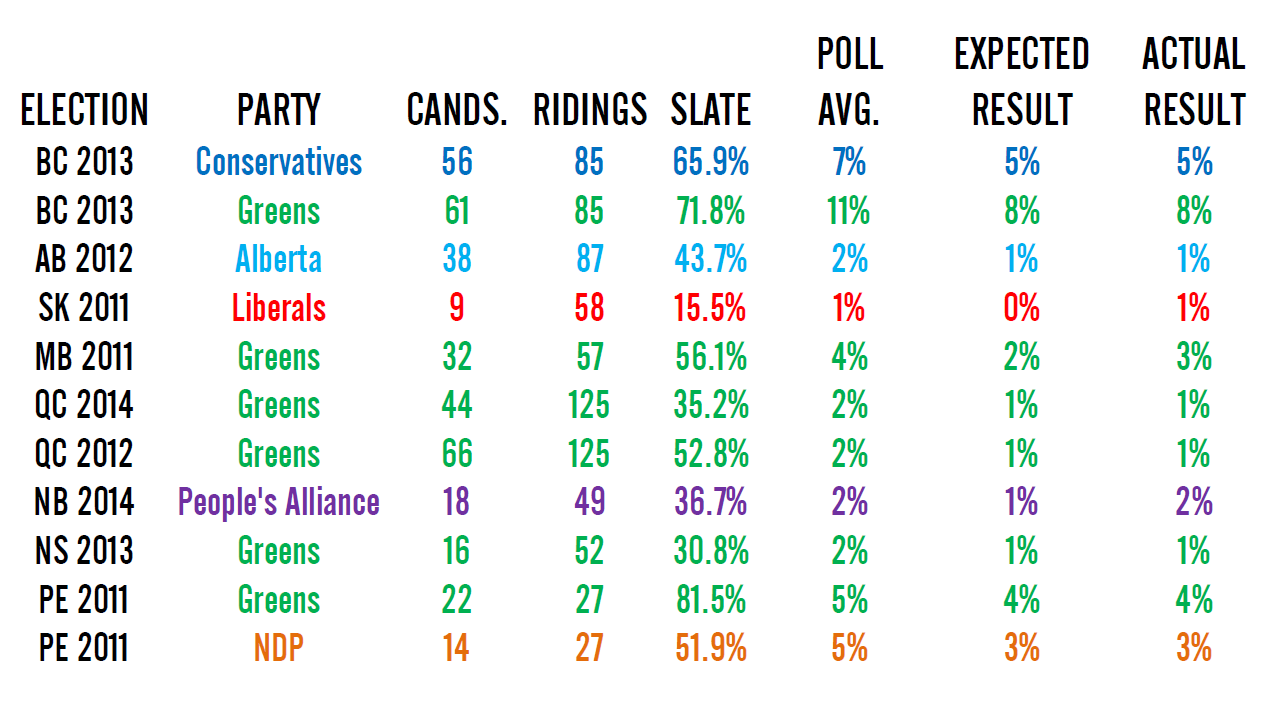 As you can see from the chart above, in virtually all recent cases the polls overestimated the support of parties not running a full slate by roughly the same proportion as the number of candidates they were running.

It would seem that many poll respondents are unaware of whether or not a candidate for a particular party is running in their riding. How this affects their voting behaviour is a puzzle. Do they discover only in the ballot booth that their favoured party is not on the ballot, or do they discover this in only the very last days of the campaign? And what do these people do? Spoil their ballot, not show up, or vote for another party?

Or is this overestimation just a sign of a party's lack of funds, organization, and get-out-the-vote infrastructure?

In the context of Alberta, what will these Liberal voters do? They could be worth three percentage points. An argument could be made that they could go to any of the three major parties, or the Alberta Party in ridings where they have a candidate where the Liberals do not. But it is impossible to speculate with much confidence. Rural Liberals may be different from Edmonton Liberals and Calgary Liberals. The local race may play a very big role as well. They may cast a ballot for the NDP in ridings where they have a good chance, or for the PCs in ridings where the race is between the Tories and Wildrose. Or they could even vote for Wildrose to send the PCs a message.

In regards to the other parties, the projection has also been adjusted. Support for other parties is often overestimated in polls, and in the past I have found that an effective measure of their likely support is based on two factors: the average support a party received in the previous election in the ridings where it had a candidate, and the number of candidates it has nominated in the current election.

In the case of the Alberta Party, to take an example, it has nominated 36 candidates. The party averaged about 3% per candidate in 2012. Take into account leader Greg Clark's potential performance in Calgary-Elbow, and you end up with the party capturing 1.5% of the vote. That is what the projection assumes will happen, and added to that are the expected vote shares for the Greens, independents, and an assortment of fringe parties.
Posted by Éric at 9:34:00 AM