What is going on in Alberta?

You know things are strange when it seems even pollsters can hardly believe their own numbers. In Mainstreet's latest missive, we're told to prepare for some 'drastic swings' in the coming weeks. ThinkHQ cautions us that we 'need to be careful about reading too much into the early horserace numbers'.

I'll add to that sentiment. Everyone in Alberta polling was already spooked by 2012. This sort of terra incognita is just terrifying. Here be dragons, folks.

It isn't that the polling is contradictory. Quite the opposite, and that makes it even more off-putting. Predictable Alberta is being turned upside down, and who knows what will fall out of it. 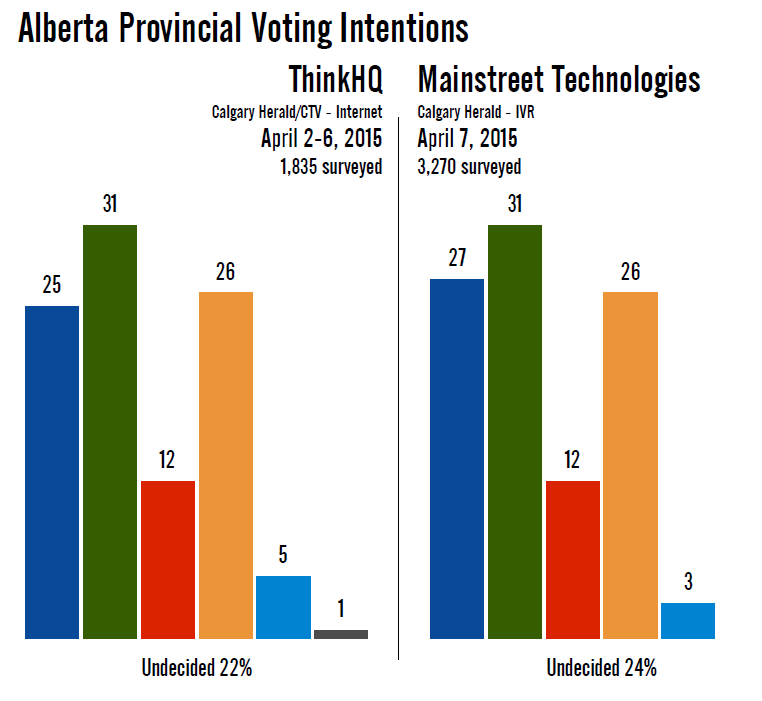 The Calgary Herald is doing double duty on Alberta polling these days, coming out with new numbers from ThinkHQ last night (also reported by Metro Calgary and CTV) and then even more new numbers this morning (here reported by the CBC) from Mainstreet Technologies. And the two polls, one conducted online and the other via IVR, showed virtually identical results.

Wildrose scored 31% in both polls, with the Progressive Conservatives and New Democrats only a point apart for second place.

Both polls also put the Liberals at 12% support.

There is a lot of agreement to go around, but these numbers are unprecedented. In my Alberta polling archive going back to 2008, I have no poll showing the PCs in third place, and only in the darkest moments before Alison Redford resigned have the Tories polled this low before. In none of these polls going back seven years has the NDP even managed 20%, but here they are at 26%. From an electoral perspective, the last time the New Democrats took this much of the vote was in 1989.

This is not to say that the polls are unbelievable. With the Insights West poll from last week, we now have three separate pollsters showing broadly the same thing. Jim Prentice has gambled on an early election, and the first roll of the dice is looking very bad for him.

Wildrose has recovered, certainly, but at 31% is still below where it stood on election night in 2012. They are benefiting from the PCs' slide by default, as the NDP makes important gains.

Regionally, the two polls are also in broad agreement, though it should be pointed out that ThinkHQ reported the results for the cities of Edmonton and Calgary only, rather than the wider CMA. And ThinkHQ had no results for the rural parts of Alberta.

Nevertheless, both polls showed strong results for the NDP in Edmonton (42% for ThinkHQ, 20 points up on the Tories, and 52% for Mainstreet, 31 points up), with a close race between the PCs and Wildrose in Calgary. Mainstreet gave Wildrose a sizable advantage outside of the two main cities.

As the projection suggests, this makes for a confused race. Though marginally ahead in the popular vote, Wildrose is projected to take between 18 and 38 seats, or 25 more precisely. That gives the Tories the edge on winning the seat count, with between 20 and 49, or 35.

This is in large part because of the PCs' lead in Calgary, which alone provides them with half of their seats. With enough residual support to retain some seats in Edmonton and the regions, this gives them the edge.

But it is a knife's edge, because there are a lot of very close races. The maximum and minimum ranges show just how many, with the PCs projected to take between nine and 61 seats, and Wildrose between eight and 55 seats. In other words, more than half of the 87 seats up for grabs could swing between Wildrose and the PCs with only a small shift in voting intentions.

The NDP has more surer footing, since its vote is so concentrated in Edmonton where almost all of their projected seat wins are located. But if the NDP is really moving into contention, it opens up a lot of possibilities for them. And this is likely at the detriment of the Liberals, who are probably being over-estimated in the model (which is only karma as the model under-estimated them in 2012).

This is a nightmarish scenario for pollsters. With three parties so close to each other, pollsters could easily get all three parties within the margin of error and still miss the order entirely. And with so many close races, the seat projection model is really going to be blowing steam out of the hinges.

Will it hold, though? It is hard to imagine that such a close three-way race would be able to sustain itself for the next month. Voters tend to go one way or another en masse at some point. And ThinkHQ found that 19% of Albertans said they strongly agreed they could change their mind, while another 39% said they somewhat agreed. That mean 58% of Albertans are considering their options.

Perhaps we should indeed expect some drastic swings, then.
Posted by Éric at 11:54:00 AM