Prince Edward Island is holding its provincial election on May 4, a day before the vote occurs in Alberta. The PEI campaign has been over-shadowed by the dramatics in the West in polling as well.

The most recent poll (and if the 2011 campaign is any indication, perhaps the last poll) was commissioned by The Guardian and published on Saturday. It comes from the Corporate Research Associates, and shows Wade MacLauchlan's Liberals in a good position to be re-elected. 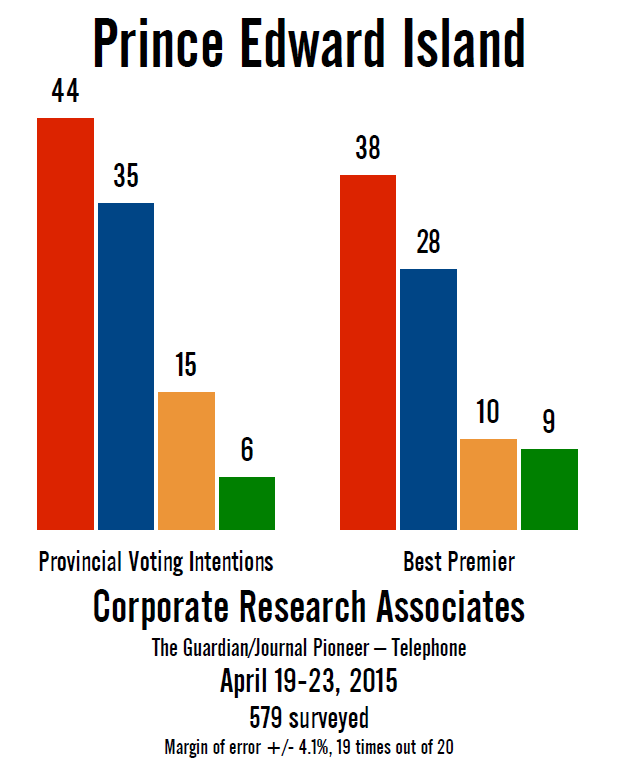 But at 44%, the Liberals' margin over the Progressive Conservatives has been reduced. The party has fallen 14 points since CRA last polled between February 9-28, though that was before Rob Lantz was named the Tories' new leader.

Of the total sample, 13% was undecided (another 6% refused to answer or said they would not vote).

For the PCs, this is their best poll since that election, when they took 40%.

The New Democrats appear to have halted their decline, after dropping over six consecutive quarterly polls from 32% in August 2013.

Is MacLauchlan the problem? Probably not. With 38% saying he would make the best premier, that puts him better or equal to where Robert Ghiz stood between June 2012 and February 2014.

It is instead the performance of Lantz, who with 28% jumped 18 points over interim leader Steven Myers's numbers, and is the highest any leader of the PCs has managed since before the 2011 election.

By contrast, the 10% that Mike Redmond scored as leader of the NDP was his worst.

Another poll emerged out of Prince Edward Island recently, coming from Abingdon Research. A B.C.-based firm that works mostly with conservative parties (but says it has no clients in PEI), the poll was passed over by the media. The results are broadly similar to what CRA found. It put the Liberals at 43%, followed by the Tories at 27%, the NDP at 18%, and the Greens at 12%. The combined score for the parties that were not represented in the legislature (30%) is extraordinarily high.

One big asterisk for this poll is that it was conducted online. PEI is a small province, and building a representative panel for it has got to be tricky.

I have not developed a complete model for the PEI election, due to the province's history of having very little polling. But a generic swing model, taking into account each of the two polls' margin of error (hypothetical, in the case of Abingdon), gives us an idea of what to expect.

It gives us a Liberal majority, though one that could potentially be won by the skin of MacLauchlan's teeth. But that is at the extreme of CRA's margin of error, which puts the two parties virtually in a tie.

With CRA's poll, the Liberals would win between 14 and 24 seats, enough to secure another majority government. The Tories would win between three and 13 seats, setting them up for a slightly better performance than they had in 2011.

Abingdon gives the Liberals a more comfortable edge, with the closest seat count being 19 for the Liberals and eight for the PCs.

Neither poll shows the NDP or Greens with enough strength to win a seat, on paper at least. If the NDP does end up near 18%, I imagine Redmond could secure his seat. The same goes for Peter Bevan-Baker of the Greens, particularly if they take 12% of the vote. New Brunswickers recently showed that a Green leader can be elected even if the party finishes in fourth place, so PEI could do the same.

Barring a dramatic turn in fortunes brought on by the upcoming leaders debates, the Liberals look like they will be returned with a majority government. But there are not a lot of voters that need to be swung in PEI, so hold off on your bets.
Posted by Éric at 1:20:00 PM