Political observers are starting to come around to the idea that the New Democrats might actually have a shot at winning, and that the 43-year-old Progressive Conservative dynasty might actually come to an end. But old habits die hard and everyone has been burned before, so you won't get much more than a 'might' out of anyone.

Two new polls make it very, very hard to argue that the New Democrats have anything but a comfortable lead in the Alberta provincial election.

The projection agrees, and has now bumped the NDP up to 39% support from 35% post-debate. Their seat haul hasn't changed much (they may be running up against their ceiling), with a range of between 28 and 47. Their range was 26 to 45 seats before. 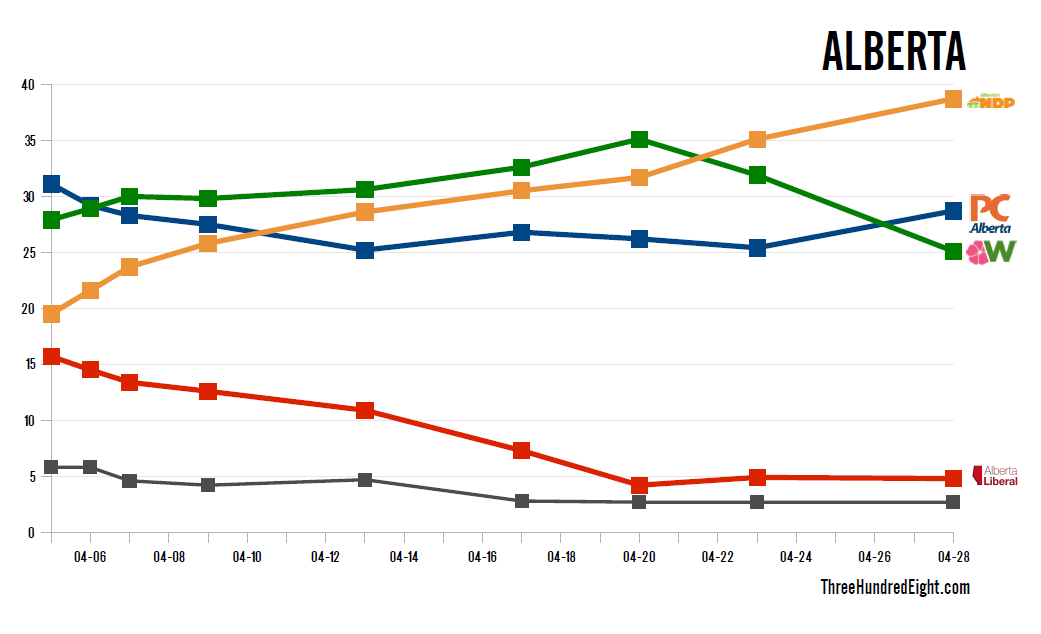 The main shift has been between the PCs and the Wildrose, who have switched positions. The Tories are up four points to 29%, and could win between 17 and 45 seats (up from five to 31). That is a dramatic shift, and does now make a PC minority victory plausible. But it would require the NDP to come down a bit to the benefit of the Tories.

Wildrose has fallen sharply, by seven points to 25%. They are now projected to win between 11 and 22 seats, down from a range of 25 to 42 seats.

The New Democrats made their biggest gain in the 'rest of Alberta', going from 28% to 32% in the projection. The Tories were also up in the region, by six points to 32%, while Wildrose plummeted 10 points to 32%. It is a very close race in the heterogeneous region outside of the two main cities.

Not so in Edmonton, where the numbers have held steady. The NDP is ahead there with 57% to 21% for the PCs and 15% for Wildrose. 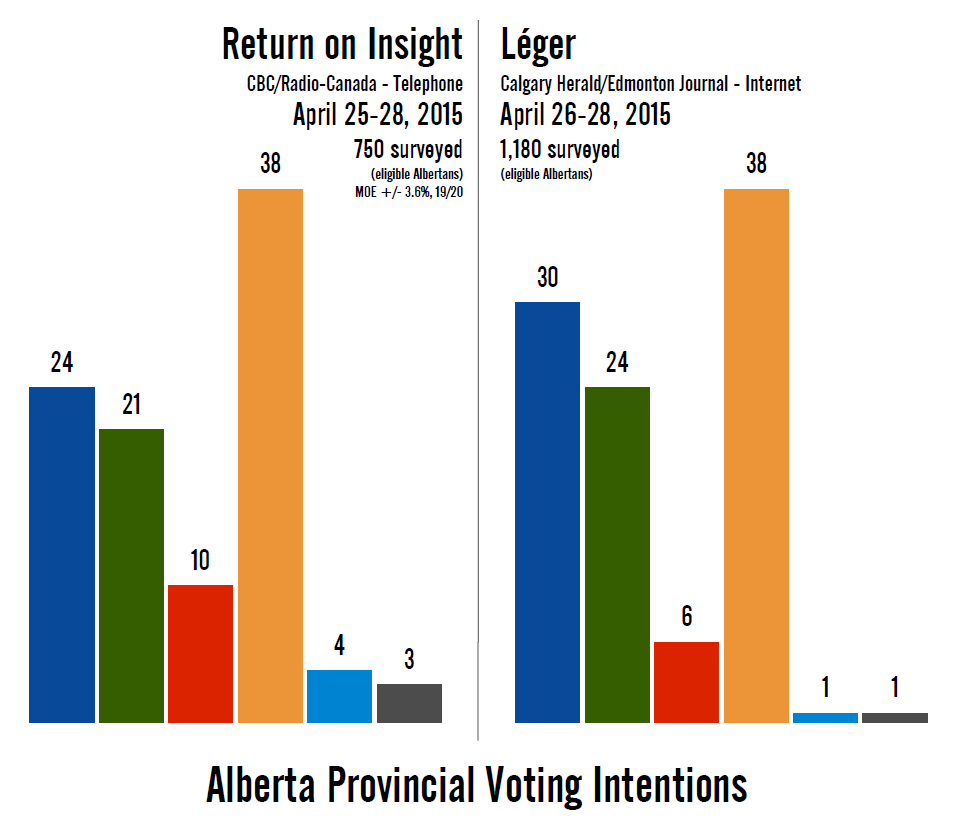 The two new polls out this morning are from firms that have not stepped into the campaign just yet. That makes it impossible to look at trends, but gives as some extra data points to compare to the numbers we've been from others.

The Return on Insight poll for the CBC showed the NDP leading very comfortably with 38%, followed by the Tories at 24% and Wildrose at 21%.

The Léger poll for the Calgary Herald and Edmonton Journal also put the NDP at 38%, with the PCs at 30% and Wildrose at 24%.

That both polls put the NDP at 38% shows that the party is indeed making some very significant inroads. Forum Research also had the NDP that high around the debate, while an EKOS poll that is forthcoming today will also show similar levels of support for the party.

The two polls also show the PCs moving into second place and Wildrose dropping into third, which is an interesting development. It certainly makes for a photo-finish. The PCs do seem to be rebounding. Whereas before Wildrose and the NDP appeared to be squeezing out the PCs, these new trends suggest that there could be a coalescing of an anti-NDP vote (in practice if not necessarily in motivation) that could boost the PCs by election day.

But it will still be a hard slog. The Léger poll found one-third of respondents choosing Rachel Notley as the best person to be premier, with Jim Prentice at only 24%. Brian Jean, at 11%, seems to be falling out of contention.

The population hasn't soured on him as much as they have on Prentice, however. Léger found that just 10% say their opinion of Prentice has improved over this campaign, compared to 51% who say it has worsened. Jean, by comparison, has a 17% to 26% split on the question. For Notley, 47% of Albertans say their opinion has improved, and just 9% say it has worsened. As long as the NDP can get their voters out, it doesn't seem like they are at considerable risk of shedding support in the final days of the campaign. It could come down to, then, what happens with the PCs and Wildrose.

The two polls also painted a broadly similar portrait of the regional breakdown, particularly in Edmonton. The NDP had 56% in the Léger poll, 57% in the RoI poll. For the Tories, that was 21% and 19%, respectively, and 16% and 11% for Wildrose.

The Return on Insight poll, for example, would result in about 44 seats for the NDP, 22 for the PCs, and 18 for Wildrose. That puts the NDP just above the majority mark, primarily due to the PCs' poor showing outside of Calgary and Edmonton.

The Léger poll, though, would give the PCs 41 seats, the NDP 35 seats, and Wildrose nine seats, pointing to a Tory minority. This is primarily due to the strong performance of the PCs outside of Edmonton and Calgary.

This demonstrates the problem the NDP might have on election night. Their vote is not nearly as well distributed as it could be, and they might fall short of winning the most seats even if they are up on the Tories by as many as eight points. The seat result on Tuesday night could be very counter-intuitive.
Posted by Éric at 10:55:00 AM