A new poll by Forum Research shows Wildrose, the New Democrats, and the Progressive Conservatives locked in an improbable three-way race in Alberta. But the approval ratings of the leaders shows that Jim Prentice is in trouble.

Interestingly, the polls now point to a minority government. Though both Wildrose and the PCs do hit the majority mark of 44 seats at the very top of their ranges, the odds are far more in favour of either party falling short. The minimum/maximum ranges, however, show that things are close enough that almost any result for either of the two parties is plausible. 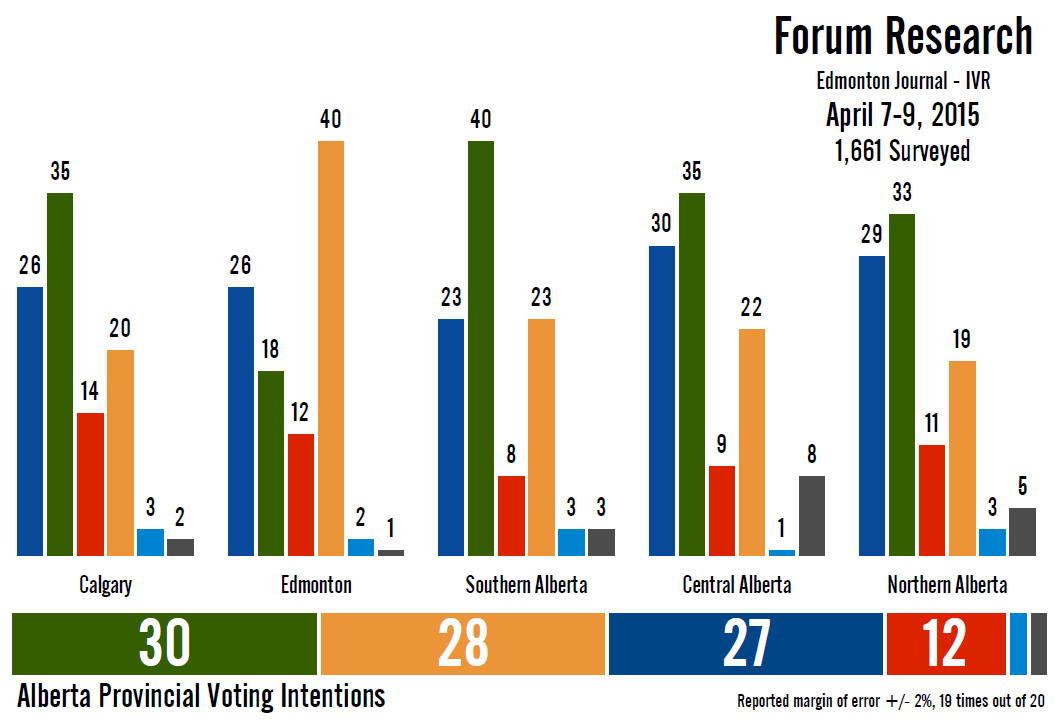 So it is a pretty clear picture. And this poll from Forum is a welcome change from its normal procedure, as the survey was taken over three days. Forum usually polls in one evening, as Mainstreet Technologies has been doing in this campaign. A sample drawn over a few days is going to get something a little more representative, as the kind of people at home on a typical Tuesday night might be different from those at home on Wednesday and Thursday (were the Flames playing, for instance?). The poll also has less potential of being skewed by a single day's events.

This survey gave Wildrose 30% against 28% for the NDP and 27% for the Tories. The Liberals trailed with 12% support, while the Alberta Party was at 2%.

Wildrose was ahead in Calgary by a comfortable margin, with 35% to 28% for the PCs and 20% for the NDP, and was ahead outside of the two main urban centres.

The Liberals did best in Calgary with 14%, while the Alberta Party managed 3% in Calgary and southern and northern Alberta.

These regional results are broadly in line with what other polls have shown.

But what makes this poll stand out is that it included approval ratings for the five party leaders. And they look bad for the premier. 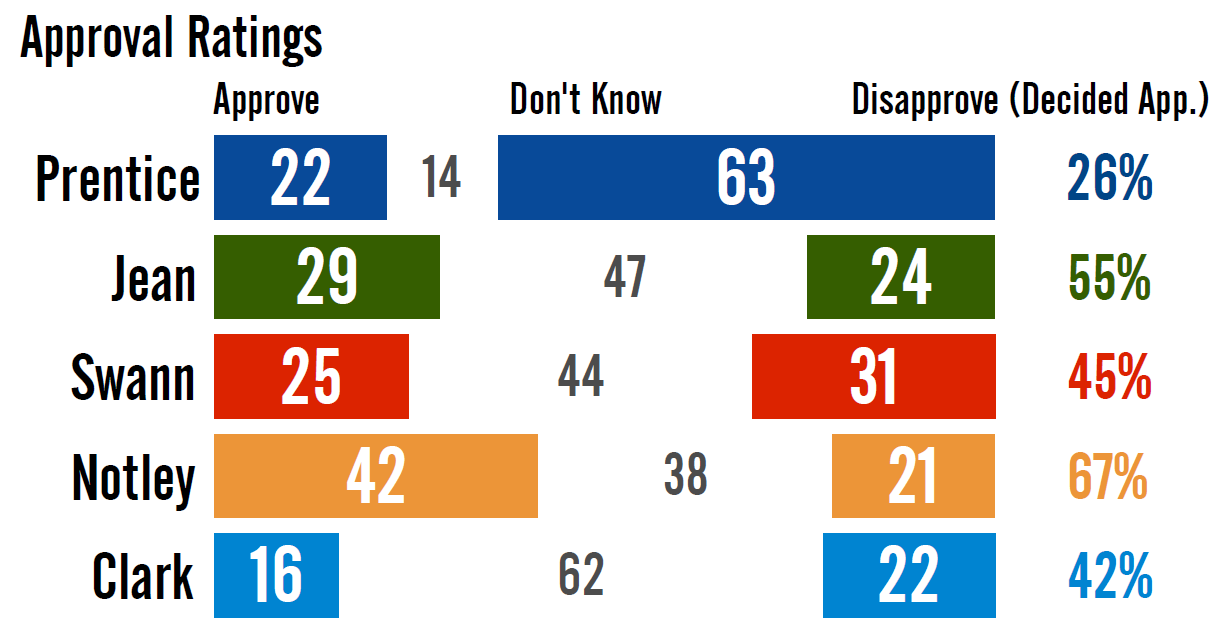 With an approval rating of just 22%, Prentice was less popular than his three chief rivals, and only put up a better score than Alberta Party leader Greg Clark. And even there, Prentice was benefiting from Clark's obscurity. If we remove the undecideds, Prentice's 26% approval rating is woefully behind everyone.

But those undecideds are very important. Most Albertans appear to have made up their mind about Prentice (his disapproval rating, at 63%, is horrible). But a large portion have not come to terms with who the other leaders are.

This is most significant for Brian Jean, the Wildrose leader and the leader who is the most unknown of the big four. Fully 47% said they don't have an opinion of him, and among those who do it was split: 29% approval to 24% disapproval. Jean has a lot of potential for growth, but also for decline. It all depends what Albertans make of him when they see more of him.

David Swann of the Liberals has a similar problem, with 44% still unsure of him. His disapproval was slightly higher than his approval rating, at 31% to 25%.

Rachel Notley has a lower unsure score, but at 38% it is still rather high. But the good news for her is that her approval rating is the best in the province at 42%, meaning that she would still have a strong score going into election day even if every undecided went over to the disapproval column. Among decideds, her approval rating is a glittering 67%. This suggests that her party's numbers may not be so shaky.

These leadership numbers tell us a lot. Prentice and the PCs are definitely in trouble, but only if Jean manages a decent campaign and voters stick with Notley. But there are still a lot of undecided Albertans - if Prentice can convince them that Jean is not up to be premier and that Notley, while likable, is also not up to the job, he can pull it off. But he is starting this campaign from a position of real weakness.
Posted by Éric at 10:28:00 AM