Wildrose moves ahead in new poll

The latest poll out of Alberta, the only one in the last week, shows Brian Jean's Wildrose moving ahead in provincial voting intentions as the Liberals collapse. In the projection, the movement has tipped a lot of races against the governing Progressive Conservatives in dramatic fashion.

The projection currently gives Wildrose the lead with just over 35% of the vote, enough to give them between 33 and 48 seats. That makes them the only party in the projection with a likely range surpassing the 44-seat mark needed for a majority government.

The New Democrats, at just under 32%, have improved their position significantly. Rachel Notley's NDP is now on track to win between 28 and 41 seats, which gives it plenty of overlap with Wildrose.

But it also gives the New Democrats no overlap with the Progressive Conservatives, who are now the odds-on favourite to finish third in the seat count with between four and 21 seats (the government's incumbency advantage tips the scales closer to 21 than to four, it should be said).

David Swann's Liberals are down to just over 4% of the vote, but because of how it is likely to be concentrated they could still hold on to between one and three of their seats.

The PCs are in a lot of trouble as they are only proving to be competitive in Calgary, and even there they trail in second with 30% in the projection to Wildrose's 35%. The New Democrats are dominating Edmonton (60%) and Wildrose is well-positioned in the rest of the province (43% to the Tories' 27%). It is a bit of a perfect storm for the opposition parties heading to the May 5 vote. Wildrose and the NDP look to have their vote concentrated in the right places, whereas the Tories have theirs spread out too evenly. 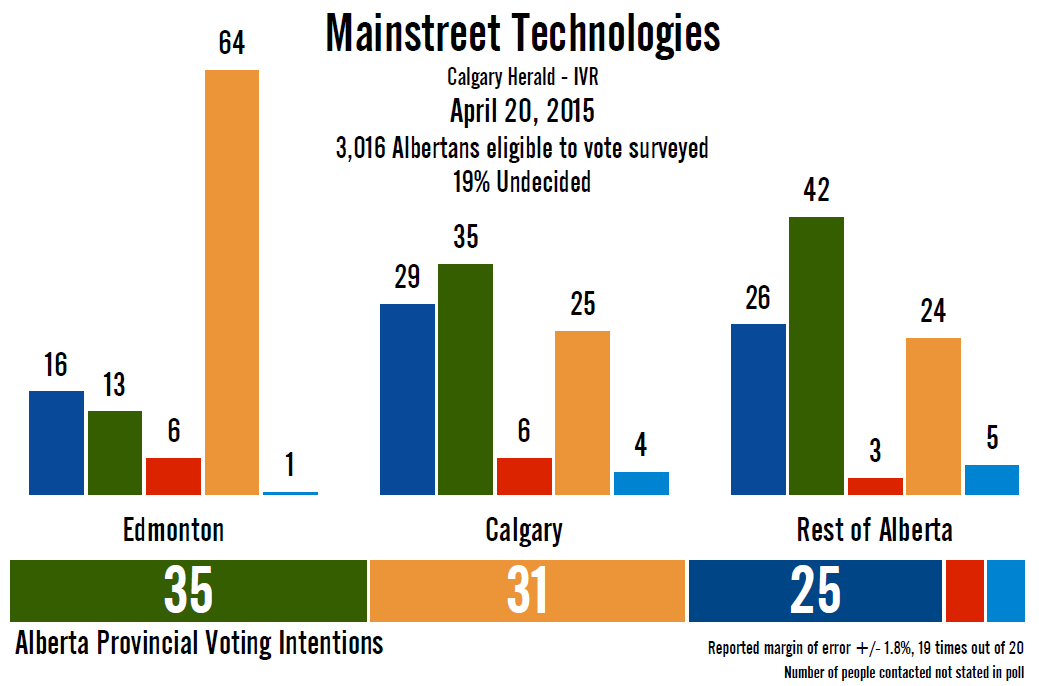 Mainstreet was last in the field on Apr. 13, and has showed significant shifts in support for Wildrose and the Liberals since then.

Wildrose was up four points to 35%, putting them ahead of the NDP, up just one point to 31%. The PCs were also up a point, increasing to 25% support.

The Liberals were down six points to just 4%, putting them in a tie with Greg Clark's Alberta Party (down one point to 4%).

The Liberal collapse is interesting. I asked Mainstreet whether they were making some adjustments for the Liberals or not, and I was told that all respondents had the Liberals as an option. That suggests that either Albertans are very aware of whether or not they have a Liberal candidate in their riding, or that even the party's 4% support is over-stated.

Mainstreet asked Liberal supporters what they would do if there was no candidate in their riding. The result bodes well for the New Democrats, as they were the choice of 61% of Liberals. Only 10% chose Wildrose and just 2% the Tories, suggesting that all of the Blue Liberals that flocked to the PCs in 2012 are now gone. What's left are people who are either centre-left or just anti-PC. Another knock against Jim Prentice's re-election chances.

Turnout is unlikely to benefit the Tories either, as Mainstreet found no real difference between all decided voters and those who say they are certain to vote. In fact, it only widened the margin between the Tories and Wildrose.

But the PCs do seem to have hit rock-bottom. They dropped five points in Edmonton, but were up slightly in Calgary and in the rest of Alberta. In those two regions, the race seems to be shaping up as a PC/Wildrose contest, as the NDP was down two points outside of Edmonton and Calgary and was unchanged in Calgary itself. The New Democrats may have hit their ceiling.

Their support is almost comically unbalanced, however, with their vote jumping 13 points to 64% in Edmonton. Their nearest rival was 48 points behind.

Wildrose is picking up some steam, with a gain of six points in Calgary and more marginal increases in Edmonton and the rest of the province.

On paper, it looks like Liberals have crossed over to Wildrose, as the increases that Wildrose experienced were almost identical to the decreases that the Liberals suffered (seven points in Edmonton and Calgary, four in the rest of the province). Considering the second-choice numbers for remaining Liberals, it is possible that all of the anti-PC Liberals have jumped ship to Wildrose. A more likely explanation, though, would be a lot of cross-pollination between parties, the end result being a jump for Wildrose.

The result in Calgary-Fort differed little from the projection, particularly considering the margin of error, and so serves to confirm that the NDP is indeed doing well in pockets of the city.

Edmonton-Beverly-Clareview, however, had the NDP with far less support than the projection expected. This is not too much of a surprise, since the proportional model can balloon a surging party's support in regions where they already have a strong base. It suggests that the NDP's support in Edmonton may be more uniformly spread, giving them a better chance in every riding. But with 64% support citywide according to Mainstreet, they already have pretty good odds.

But the campaign has been dominated so far by one-day IVR polls from Mainstreet Technologies. It would be very helpful if we had multiple sources to work with, each using different methodologies. I imagine - and hope - that a flurry of post-debate polls will crowd the playing field a little soon and give us a clearer picture of the race.
Posted by Éric at 10:15:00 AM