Since no new poll is out and I'm still waiting on the full Ontario results in the latest Strategic Counsel poll, I thought we'd look at how individual polling firms have been tracking the trends. Since one would hope polling firms are consistent in the way they poll Canadians, the trends they show from poll to poll are a good demonstration of how parties are doing. When you take all of the polls from all firms together, you get a good indication of actual support. Looking at individual polls shows growth and decline.

So, I've decided to start with Angus Reid, which is my most heavily weighted polling firm. The chart below shows the trend in Canada as a whole, Ontario, and Quebec.

At the national level, there hasn't been very much movement. The Conservatives hit a high of 39% on January 15, and have since dropped to 33% in their latest poll on April 22. From that January poll, there has been a consistent decline of Tory support. However, Angus Reid has been far more conservative in tracking Liberal growth. Michael Ignatieff's party had 31% support on December 12, but that dropped to 29% on January 27. It has since risen to 33%. That is only a variation of four percentage points, as compared with the six-point variation the Conservatives have shown.

The NDP has maintained itself within a three point variation. Their support almost shows a bell curve, with a low 15% on December 12 rising to a high of 18% on January 27, and then dropping back to 15%. The Greens, the hardest party to track, also have a three point variation. They reached a high in Angus Reid polling on December 12 with 8%, dropped to 5% on January 15, and have since settled at between 6% and 7%.

Ontario has shown far greater variation, which is to be expected in smaller regions. The Conservatives, however, were relatively consistent in Angus Reid Ontario polling, maintaining itself at 42% and 41% between December 12 and January 27. The party has since dropped to 38% in the last two polls, which is still higher than most other firms have put them. Thus the Tories have had a variation of four points in Ontario.

The Liberals, on the other hand, have shown a variation of seven points, with a high of 40% on January 15 and a low of 33% on January 27, a great change in a matter of days. They then rose to 39% and first place in the province, but are currently at 35%. The NDP has also shown great variation, with lows of 12% on January 15 and March 11, but hit a high of 19% on January 27 and are currently at 17%. The chart clearly shows that for Angus Reid, the NDP and the Liberals directly split votes, since their trend lines are virtual mirror-images.

The trend lines in Quebec show much more consistency. The Bloc Quebecois has remained on top, being at 38% and 40% over the last two polls, but dipping to 31% on January 27. The Liberals have shown a steady increase as the Conservative support drops, from 25% on January 15 to a high of 35% on April 22. The Conservatives have fallen away just as the Liberals have risen, maintain a 19% level in January but since dropping to a dismal 10%. The growth of six points for the Liberals between March and April are in line with the drop of six points for the Conservatives. The NDP has also done badly of late, dropping from a high of 17% in January 27 to a low of 6% in April. NDP support was highest when Bloc support was lowest, showing a voting similarity between the two social democratic parties. The Greens have been relatively consistent at 5%.

Compared to the other polling, it would seem that Angus Reid's system is more beneficial for the Conservatives than the Liberals. That isn't to say there is a bias in the system, after all, Angus Reid had the closest prediction in October. And the polling firm has been one of the stronger pollsters for the Liberals in Quebec. 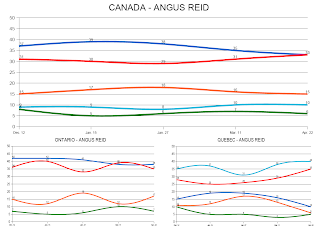