01/05/11 UPDATE: The final projection update will be posted at the end of the day when all of the final polls of the campaign have been made public.

The final week's ceilings are dramatic. So let me take this opportunity to calm everyone down - these are not actual projections of likely outcomes. These are best-case-scenario ceilings. I am not projecting any of these scenarios to actually take place.

The Conservative ceiling is based on the party capturing about 44% of the national vote, split into the regions thusly: 45% in British Columbia, 74% in Alberta, 55% in the Prairies, 48% in Ontario, 18% in Quebec, and 48% in Atlantic Canada.

That would give the Tories 23 seats in British Columbia, 28 in Alberta, 23 in the Prairies, 66 in Ontario, eight in Quebec, and 18 in Atlantic Canada for a total of 167. That is a majority government, and generally where they have been in the ceilings throughout the campaign.

The New Democrats, with 73 seats, form the Official Opposition. The Liberals win only 45 seats and the Bloc is reduced to 23.

This is not an outlandish scenario, as the results in British Columbia, the Prairies, and Quebec are well within the norm. Sweeping Alberta is also quite likely. But the Conservatives would need to capture historic levels of support in Ontario and Atlantic Canada, which seems less likely to occur.

That would give the party 84 seats, with six coming from British Columbia, two from the Prairies, 42 from Ontario, 15 from Quebec, and 18 from Atlantic Canada. That allows them to retain their status as the Official Opposition, but is really only a growth of seven seats from their standings when the government fell - and I remind you that this is a ceiling.

The Conservatives would win 131 seats, the New Democrats 63, and the Bloc 30. With a combined 147 seats, we'd likely see the Liberals and NDP govern. 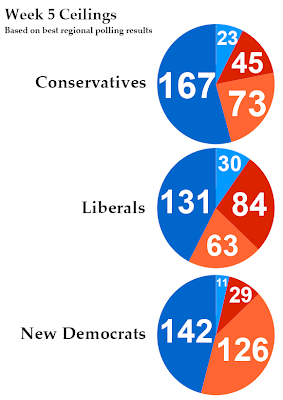 This would give the party 16 seats in British Columbia, two in Alberta, nine in the Prairies, 27 in Ontario, 56 in Quebec, and 15 in Atlantic Canada for a total of 126.

The Conservatives would still win 142 seats and get the first crack at forming government. The Liberals would be reduced to only 29 seats, but with the NDP could combine for a majority of 155. The Bloc would lose official party status with only 11 seats in the House of Commons. 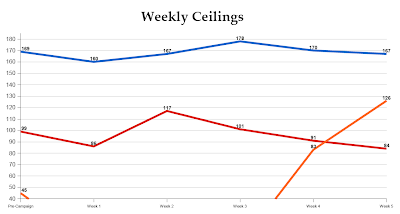 I do not believe this to be a likely outcome, especially considering the unnaturally high levels of support the NDP had in a few polls in the Prairies, Ontario, and Atlantic Canada. But if this campaign has taught us anything, it's that nothing is impossible.

I will have a projection update tomorrow afternoon. That will be my final post before the election takes place on Monday.
Posted by Éric at 4:17:00 PM