The Manitoba projection model is now completed, and projects a New Democratic majority government in the province, with the Progressive Conservatives forming the Official Opposition. 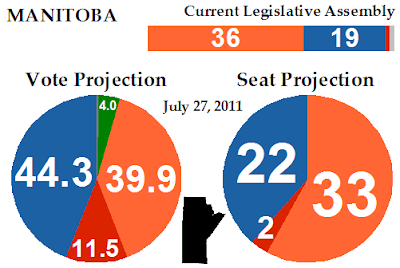 However, the NDP wins this fourth mandate with fewer votes than the PCs.

The Progressive Conservatives are projected to have the support of 44.3% of Manitobans, compared to 39.9% for the NDP.

But because of greater vote efficiency, the New Democrats manage to elect 33 MLAs to Winnipeg, compared to 22 for the Progressive Conservatives and two for the Liberals.

Outside of Winnipeg, the Progressive Conservatives take the majority of the seats with 16 to the NDP's 10.

In Winnipeg itself, the New Democrats still dominate with 23 seats to the PCs' six and the Liberals' two.

Understandably, as the NDP is down by 4.4 points several of the seats they hold in the projection are marginal.

The NDP has a five-point or less lead in five seats, while the PCs are leading by such a margin in two seats and the Liberals one.

This puts the NDP range at between 28 and 36 seats. At the lower end of the scale, the NDP is in danger of being defeated by the PCs while at the higher end it puts them on par with their current caucus. For the PCs, they could win as few as 20 seats or as many as 27, indicating that at this point they stand a very good chance of improving upon 2007's results.

The Liberals range at between one and two seats. This is the difference between the party holding on to the successor to the riding of Inkster after Kevin Lamoureux's departure or not.

Now, Manitoba's ridings have been re-drawn. Some of the ridings have changed completely while others have changed only a little bit. Many thanks go to Kirk Vilks, who calculated the transposition of votes using the poll-by-poll breakdowns. In the chart to the left, incumbents are determined either by the sitting MLA who is running for re-election in a given riding, or by the winning party in each riding after the transposition of votes.
Posted by Éric at 9:39:00 AM