The Ontario projection model is now fully up and running, and is projecting both the popular vote and seat wins for the 2011 provincial election. The first Ontario projection for ThreeHundredEight is a Progressive Conservative majority - by a wide margin. 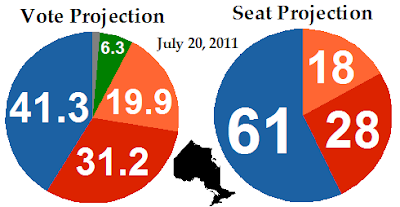 With the aggregation of all available polls, ThreeHundredEight projects that the Progressive Conservatives hold the support of 41.3% of Ontarians, leading the governing Liberals by 10.1 points. Dalton McGuinty's party has the projected support of 31.2% of the province.

The New Democrats stand in third with 19.9%, while the Ontario Greens are at 6.3% support.

This delivers Tim Hudak a majority government of 61 seats in the 107-seat legislature. The Liberals win 28 seats and form the Official Opposition, while the New Democrats win 18 seats.

This projection envisions the Liberals losing 42 of the 70 seats they currently hold, with the PCs gaining 36 and the New Democrats eight.

Regionally, the Progressive Conservatives would win the majority of seats in every part of the province except in Toronto and northern Ontario.

In Ottawa and eastern Ontario, the PCs win nine seats, the Liberals four, and the NDP one.

In central Ontario, the PCs win 10 seats and the Liberals one.

The Greater Toronto area delivers 13 seats to the PCs and five to the Liberals, while Toronto itself elects nine Liberal MPPs, seven PCs, and six New Democrats.

In the Hamilton and Niagara regions the Progressive Conservatives win six seats and the NDP four, while in southwestern Ontario the PCs double up on the Liberals with 14 seats to seven.

Finally, in northern Ontario the New Democrats win seven seats, the PCs two, and the Liberals one.

Until the final list of candidates is made public by Elections Ontario, which should take place mid-way through the campaign, ThreeHundredEight will not be presenting individual riding projections. However, I am more than happy to answer any specific riding questions in the comments section below, and will give more information on which seats have swapped hands in future projection updates. Updates to the projection will be made whenever new polls are available. Until the campaign begins, polls are aged on a monthly basis. The links to the right explain the projection methodology in detail.

Update: After so many requests for individual riding projections, I have decided to include them after all. They can now be found in the right-hand column.
Posted by Éric at 11:19:00 AM