In the last federal election, the pollsters did relatively well in nailing down the support for all five major parties. The average result was within the standard margin of error, but the biggest problem with the polls was that they all under-estimated Conservative support. This brings up the question of whether a correction needs to be made to polls in order to dial-in more accurately on the eventual election result.

In seat projecting, getting the popular vote correct is as important as having a well-calibrated model. The federal election demonstrated that in spades, as the projection model would have done very well if the polls had been right on the money.

With the provincial elections in the fall, it is necessary to take a look at whether something needs to be done to adjust the polls. Unfortunately, polling data for the provinces before the 2003 elections are very difficult to find, and I invite anyone who knows of a source to forward it to me.

But the 2007 elections do give us an indication of whether this "ballot box effect" is something to worry about. We'll start with Saskatchewan, the only province for which I was able to find polling data for the last three elections. 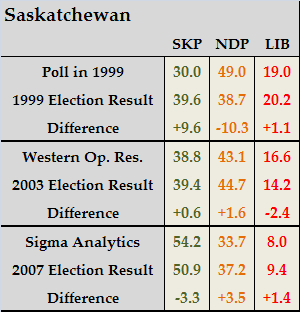 In Saskatchewan, at least, there is no discernable trend. The Saskatchewan Party was over-estimated in 2007, correctly gauged in 2003, and under-estimated in 1999. It is the opposite for the New Democrats, while the Liberals have been generally well-polled over the last three elections.

What this tells us is that there is no correction that can be made for Saskatchewan. It appears just as likely that the polls will over-estimate as they will under-estimate a given party. So, we're left to trust what the polls tell us - and in the case of Probe Research that isn't such a bad thing.

But only if they tell us anything. There hasn't been a poll out of Saskatchewan since November, and no polling firms other than ones that are based in Saskatchewan seem to report. Hopefully that will no longer be the case this fall.

Without more data to look at, we have to trust the polls as well in Manitoba. In the last election, Probe accurately pegged PC support, but was off by four points for the NDP and the Liberals. This could be an important factor on election day if something similar happens again. Hopefully other pollsters will weigh-in. Angus-Reid has been active in the past in the province.

There is a lot less reason to worry in Ontario. The average of the six polls conducted in the final week of the campaign were remarkably close to the election's results. Being within 0.4 points for the Liberals and 0.6 points for the Progressive Conservatives is excellent. Over-estimating NDP support could be an issue, however, if the Liberals and NDP start to run neck-and-neck for second in the polls. But with a good performance from the pollsters in 2007, we can hope for another good performance in Ontario this fall.

Prince Edward Island, too, was well-served by polling. Corporate Research Associates was off by less than a point for both the Liberals and the Progressive Conservatives, and was correct for the NDP. With PEI unlikely to get a lot of polls in this upcoming campaign, it is imperative that CRA's numbers are on the money again.

Newfoundland & Labrador could be more of a problem. CRA's last poll before the campaign was off by about six points for the PCs and the Liberals, though at this margin of victory for the Progressive Conservatives it did not matter much. Hopefully Telelink will be active during the campaign as well as CRA so that there are a few samples with which to work.
Posted by Éric at 12:25:00 PM