Two months in and Canadians have no regrets about how they voted in the last federal election.

According to the latest polling results from Abacus Data, the voting intentions of Canadians have changed very little since the vote was last held on May 2nd.

The poll, conducted between June 23 and 24, found that the Conservatives stand at 41 per cent support, virtually unchanged from the election and Abacus’s last poll held in mid-May.

The New Democrats are also holding steady at 32 per cent support.

My article for The Huffington Post is the first reporting on this poll conducted by Abacus Data. It doesn't show much change, but what is interesting is some of the demographic breakdowns that were provided to me. Check out the article to see what I'm talking about.

In the meantime, how about a seat projection for this poll? Update: A typo, giving the Liberals 17.3% in British Columbia rather than 7.3%, that was input into the seat projection model has been fixed. 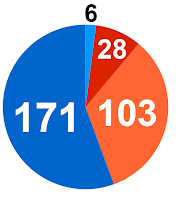 With this poll, ThreeHundredEight projects a Conservative majority of 171 seats, with the Official Opposition being formed by the New Democrats at 103 seats.

The New Democrats win seven seats in British Columbia, two in Alberta, five in the Prairies, 22 in Ontario, 58 in Quebec, and eight in Atlantic Canada.

The Liberals win two seats in the Prairies, 17 in Ontario, and nine in Atlantic Canada.

This poll completely shoves the Liberals out of Quebec (along with BC). It's a door the Bloc uses to win a couple more seats. But it is a much better poll for the Tories in the province, as though they are still in third behind the Bloc they nevertheless take 22.4% of the vote.