Can NDP cobble together a plurality of seats?

Late last week, iPolitics.ca released the details of the newest EKOS Research poll. The survey showed little real movement at either the national or regional levels, but the result pointed to the potential for the New Democrats to tie the Conservatives in the seat count, even with a national lead of only 2.1 points. 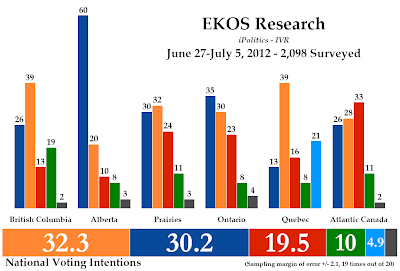 After being quiet for some time on the federal scene, EKOS is quite active again. They were last in the field Jun. 21-26, meaning this poll of Jun. 27-Jul. 5 did not miss a beat.

Since that last poll, there have been no statistically significant shifts of support at the national level. This is unsurprising considering we are in the midst of a very hot summer and little has been happening that could bump the numbers around.

Then there are the Greens who registered 10% support, up 0.5 points from EKOS's last poll. That puts them out of step with what other pollsters have recorded, and EKOS recognizes that. In their analysis that accompanied their polling data, they give two reasons for the discrepancy: firstly, that some other firms are not prompting for the Greens, and secondly, that some other firms are not calling cell phones.

I don't doubt that these two issues explain some of the higher levels of support recorded by EKOS (something that has traditionally been the case for the firm). But most firms do prompt for the Greens. The only firm that I am aware of that does not prompt for them (only, some polls prompt for none of the parties) is Ipsos-Reid. And as for cell phones, one would expect that the firms using online panels would also be able to capture a high degree of Green support. Sometimes they do, sometimes they don't, but none are consistently so much higher than the norm. But perhaps this has something to do with how they weigh their panel with an eye towards turnout.

Is Green support rising? Probably not to 10%, but it does seem to be on a slow increase. The party scores more 6s and 7s than it did shortly after the 2011 election, when they managed more 3s and 4s. But I don't think there is enough evidence to spark talk of a Green Invasion just yet. 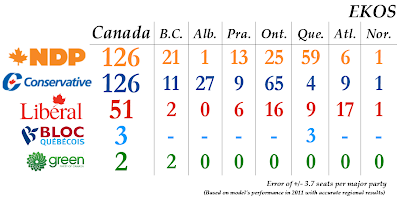 With these levels of support, the New Democrats and Conservatives would tie with 126 seats apiece on the current 308-seat map. The Liberals would win 51 seats, the Bloc Québécois three, and the Greens two.

At almost 20% support, the Greens would be able to win a second seat in British Columbia. Would they actually get 20% of the vote in B.C. if an election were held today? Probably not, but they do have the potential to pull off another seat win if they manage to make major gains in the province, particularly at the expense of the Liberals.

The New Democrats are able to tie for the most seats in this survey in large part because of their strong performances in the West. Depending on the poll, the Conservatives are usually able to win a plurality even if they trail by three or four points because of their lock on Ontario and the West. In this poll, however, that lock is broken in British Columbia and the Prairies. With 35 seats in the four western provinces and 59 in Quebec, it is not difficult for the NDP to win enough seats in Ontario and Atlantic Canada to put them over the top. If the New Democrats cannot manage to make major inroads in Ontario, they could by-pass the province if they win a majority of seats in B.C., Saskatchewan, and Manitoba.

But the Conservatives have the advantage, due in large part to the six new seats going to Alberta and the 15 new seats in Ontario. The Conservatives should be able to win two-thirds of these 21 seats on these kind of support levels, which swings the pendulum back in their favour. However, a few extra seats in Atlantic Canada (where the NDP have been leading in most polls) could tie things up again. This points to something that has been apparent in poll after poll: British Columbia is looking like a real problem for the Conservatives and a key province as we head towards 2015.
Posted by Éric at 9:33:00 AM