Polls from two regions of Quebec suggest that voters are swinging every which way in the run-up to the rumoured September provincial election. While the Parti Québécois could be struggling in their heartland of the Saguenay-Lac-Saint-Jean, the Liberals appear to have taken a big step backwards in Estrie (also known as the Cantons-de-l'Est or Eastern Townships).

For a look at how leaders have fared in past Quebec elections based on their levels of experience, check out my article for The Globe and Mail here.

The poll by Segma Recherche is somewhat old, having been conducted between Jun. 4-6. But the results are quite surprising.

Throughout the Saguenay-Lac-Saint-Jean, the Parti Québécois fell some 14 points to only 34% support. The Liberals were also down, dropping six points to 32% since the 2008 election. 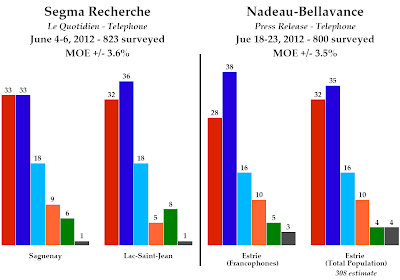 The Coalition Avenir Québec made the most important gain, picking up eight points to hit 18% support in the region. Québec Solidaire was up five points to 8% while the Greens were up about six points to 7%. They just need to find candidates for the region, as they only ran one in the five ridings in 2008.

There is little variation within the region, with the PQ and Liberals tied at 33% in Saguenay and the PQ holding an insignificant four-point edge over the Liberals in Lac-Saint-Jean.

The student protests appear to have greatly wounded the PQ in the region, as only 33% agree with the PQ's position on the matter. A majority, or 57%, are with the government. That hasn't helped the Liberals much as they are still down from the 2008 election, but it hurts the PQ much more.

With these levels of support, the Liberals would likely be able to pick up Chicoutimi and Roberval, while retaining Dubuc. The PQ would hold on to Jonquière and Lac-Saint-Jean.

The other survey, by Nadeau-Bellavance (a PR firm) was conducted in Estrie more recently, between June 18-23. Nadeau-Bellavance only polled francophones in the region, however, giving us just one piece of the puzzle.

Among francophones, Nadeau-Bellavance found the Parti Québécois well ahead with 37.8% support. The Liberals trailed with 28.3% while the CAQ was third with 16%. Québec Solidaire stood at 9.9% while the Greens were at 5.3%.

But, according to official statistics from the Quebec government, 10.6% of the population in Estrie have a language other than French as their mother tongue. If we insert those non-francophones into the survey, and portion them out according to the latest poll averages, the PQ is still ahead but with only 34.6% support. The Liberals trail with 31.7%, while there are no major differences for the other parties.

Compared to 2008, this represents a dramatic 10.5-point drop for the Liberals in the region. The PQ is down only 2.7 points, while Québec Solidaire is up six points. The Greens are up 2.4 points, while the CAQ is up 0.7 points over the ADQ's performance.

In terms of seats, the Liberals would only hold on to Mégantic and Orford with these numbers. Johnson, Richmond, Saint-François, and perhaps even Sherbrooke would go over to the Parti Québécois on this kind of shift in support.

These two polls suggest that Quebecers may swing in wildly different directions from region to region when they next cast their ballots. It will make the result difficult to predict. It should be a fascinating election.
Posted by Éric at 10:40:00 AM