The Conservatives took a step backwards in the month of June, as their polling average dropped by 1.2 points and opened up a 2.2-point margin between their support and that of the New Democrats. The NDP remains the most popular party in the country, and is leading in three of six regions. 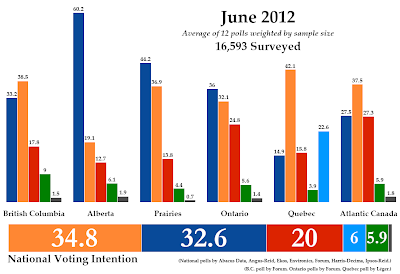 Eight national polls were conducted during the month of June, while both British Columbia and Quebec had one federal poll conducted exclusively within their boundaries. Two polls were also conducted in Ontario. In all, about 16,590 Canadians were polled on their federal voting intentions in June.

The New Democrats barely budged from their May 2012 result, picking up one point to hit 34.8% support - their highest yet on record since monthly averages were first calculated by ThreeHundredEight.com in January 2009.

The Conservatives were down 1.2 points to 32.6%, and they have been struggling to get out of their rut of 33% to 35% since December 2011. The Liberals, after suffering losses for three consecutive months, finally stopped the bleeding with a 0.2-point gain to return to 20%. 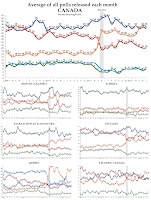 The greatest amount of shifting in support occurred in British Columbia, but the New Democrats held firm at 38.5% (they have been around 39% for three months now). The Conservatives dropped 3.8 points to 33.2% in the province, their lowest mark since November 2010. The Liberals were up 2.1 points to 17.8%, while the Greens were down a point to 9%.

The New Democrats were up 1.8 points in Quebec to 42.1%, putting them well ahead of the Bloc Québécois, which was up 0.6 points to 22.6%. The Liberals were up 0.1 point to 15.8% and the Conservatives were down 0.7 points to 14.9%. The Greens, at 3.9%, had no change in support. After a roller-coaster ride in the province, voting intentions in Quebec have stabilized for all parties since Thomas Mulcair became NDP leader. Intentions are generally back to where they were on election night.

The Conservatives picked up 0.5 points in Ontario to lead with 36%, while the New Democrats dropped 1.4 points to 32.1%. The Liberals stopped four months of decreasing support with a modest 0.4-point gain. They averaged 24.8% support in the province in June. The Greens were up 0.3 points to 5.6%.

(Note: References to May's support may not line-up exactly with what was reported in last month's breakdown, due to a Nanos poll that was released after May's federal averages were originally calculated.) 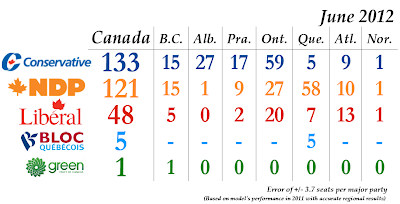 Despite trailing by 2.2 points, the Conservatives would have still been able to win a plurality of seats in a June election. They would have won 133 seats, representing a drop of seven from the May projection.

The New Democrats increased their seat haul by three from May and would have won 121, while the Liberals were up four seats to 48.

The Bloc Québécois, at five seats, and the Greens at one were unchanged.

British Columbia was the main source of problems for the Tories, as they slipped four seats to only 15, tying them with the New Democrats. They were also down two seats in the Prairies to 17 and one in Atlantic Canada to nine, compared to where they were in May.

The New Democrats were up two seats in the Prairies to nine, two in Atlantic Canada to 10, and one in British Columbia to 15, but were down two seats in Ontario to 27 due to the gap between themselves and the Conservatives widening by almost two points.

The Liberals made their biggest gain in British Columbia, picking up three seats from May. They were also up two in Ontario but down one in Atlantic Canada.

A rough estimate gives the Conservatives 149 seats, the New Democrats 131, and the Liberals 52 seats on the 338-seat map (most of which remains unknown).

Along with voting intentions, ThreeHundredEight.com will now be tracking the approval ratings of the party leaders. This being the first month that it has been calculated, there is nothing with which to compare the results.

Nevertheless, Thomas Mulcair had the best numbers in June with an average approval rating of 41%. Bob Rae was not far behind with 38%, while Elizabeth May scored 35% approval. Stephen Harper, at only 34.8% approval, had the lowest rating of the four leaders.

In terms of who Canadians see as the best Prime Minister, there is no average to calculate as only one poll asked that question in June. Stephen Harper came out on top with 30%, compared to 20% for Mulcair, 10% for Rae, 8% for May, and 2% for Daniel Paillé. Another 19% thought none of them would make a good Prime Minister.

It was a bit of a mixed month for all parties, as none had any unambiguously good news. The New Democrats come out on top for June, having marginally gained support and - more importantly - increasing their lead over the Conservatives. Improving situations in British Columbia, the Prairies, Quebec, and Atlantic Canada bode well for the party, but a slip in Ontario is potentially more consequential.

June was not a horrible month for the Liberals, as they managed to stop their national losses. They were also up by a decent amount in British Columbia, but dropped big in Atlantic Canada and look flat in Ontario. Those two regions are their most important, and they need to be doing better in them. Though it is true that they have no leader, nothing says they can't improve their position in the interim. Gains that are not made now will have to be made later.

The only real horse in the race for the Greens is in British Columbia, and they dropped support there. But they are not in danger of losing May's seat and, at 5.9% national support, are doing better than their 2011 election result. For the Bloc Québécois, they are holding steady from the last vote. That is not a good thing for them, but the provincial election could shake things up for the Bloc in the coming months.

June was roughest on the Conservatives, who lost more than a point nationally and were down by significant margins in British Columbia and Atlantic Canada. They are also continuing to struggle in the Prairies and are well below their election score in Ontario, which all points to losing their majority. But it is still early in their mandate (when support can be expected to be at its lowest), so things may not be as dark as they appear. Nevertheless, glory is fleeting and the Conservatives will not be in power forever. Will they recover?
Posted by Éric at 9:18:00 AM