Nanos Research released its newest numbers yesterday, putting the Conservatives 3.3-points up on the New Democrats. Though their national shifts in support were within the margin of error, a large jump for the Liberals in Quebec was not. Could they be really gaining support in the province? 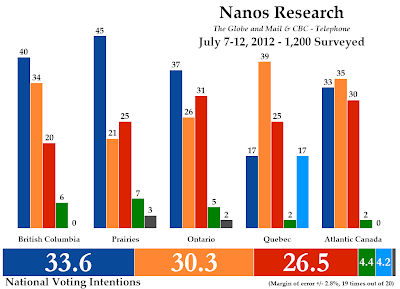 Nanos was last in the field May 26-31 and since then the Conservatives have hardly budged, picking up a tenth of a percentage point to sit atop the table with 33.6% support. The New Democrats dropped 3.3 points to 30.3%, while the Liberals were up 1.6 points to 26.5%.

That is a very high number for the Liberals, one that puts ThreeHundredEight's aggregate outside of Nanos's margin of error.

The Greens were up two points to 4.4%, a statistically significant increase (though still quite a bit lower than the aggregate, due in large part to EKOS's recent numbers), while the Bloc Québécois was up 0.8 points to 4.2%. These numbers left 1% off the board, which we can assume is support for other parties.

For the Conservatives and New Democrats these levels of support are not unusual. They have been circling the low-30s for some time now, but the Liberal number is quite high. It is not the first time that Nanos pegs Liberal support higher than the norm.

The Conservatives held the lead in the Prairies, which in Nanos's polling includes Alberta. They had 44.5% support, down 5.7 points, and were trailed by the Liberals, who slipped 3.5 points to 24.8%. The New Democrats were up 0.7 points to 21.2% while the Greens were up a statistically significant 6.3 points to 7%. Of course, considering that the party was at 0.7% in the Prairies in Nanos's last poll, this is likely just a correction.

The New Democrats led in Quebec with 38.8%, down 2.7 points. The Liberals increased their support by 7.7 points, just outside the margin of error, to place second with 25%. It's quite possible that this Liberal surge is real, but at the same time it looks like an outlier result. Even with Nanos's numbers added to the aggregation, the Liberals don't score better than 18.4% in the province.

The Conservatives managed 36.8% in Ontario, an increase of 1.2 points, while the Liberals were up 1.3 points to 31.3%. The New Democrats were down a big 5.9 points to 25.6%, while the Greens were up 2.9 points to 4.6%. Save the Green increase, none of these shifts were statistically significant.

In British Columbia, the Conservatives were up 6.4 points to 40.4% and followed by the New Democrats, down 2.7 points to 34.3%. The Liberals were down 3.5 points to 19.5%. This sort of Conservative lead in B.C. has only been recorded in two polls since April, one of them by Nanos. 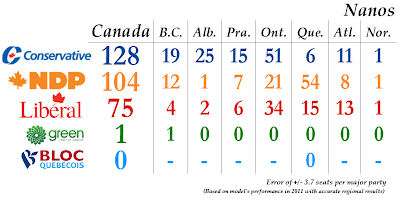 The Conservatives would be able to pull out a plurality of seats with these numbers, winning 128 to the New Democrats' 104, but with the Liberals winning 75 their days in government would be numbered.

The results in Alberta may be somewhat surprising, and it could be that part of the problem is how Nanos combines the province with Saskatchewan and Manitoba.

But the Conservatives managed 62% support across those three provinces in the 2011 election. Having that drop to 45% is quite extraordinary, and with the Liberals jumping from 11% to 25% in the region it should come as no surprise that they can actually win a few seats. If Alberta has not seen this kind of negative swing for the Conservatives, however, that would have to mean they have taken a big hit in Saskatchewan and/or Manitoba, which would mean more seats falling into the hands of the New Democrats and Liberals there - more than enough to make up for the two Liberal seats in Alberta.

In Nanos's Leadership Index, which combines the scores the leaders manage on questions of trust, competence, and vision, Stephen Harper and Thomas Mulcair have hardly moved at 72.7 points and 46.8 points, respectively. Bob Rae has jumped 9.3 points to 41.5.

If we change the Leadership Index point total into point share, we get Harper at 39.6%, Mulcair at 25.5%, Rae at 22.6%, Elizabeth May at 8.4%, and Daniel Paillé at 3.8%. That does not look unlike some of the "Best Prime Minister" results we've recently seen. Compared to the share of points from Nanos's May poll, Harper and Mulcair are each down a point while Rae is up five. Try not to get crushed in the stampede to Draft Rae again.
Posted by Éric at 9:21:00 AM