Two national polls from EKOS and Forum Research were released this week, one showing the New Democrats narrowly ahead and the other putting them tied with the Conservatives. Forum's polling is particularly good for the Tories, as it gives them a statistically significant increase in support nationwide and shows improving personal numbers for Stephen Harper. 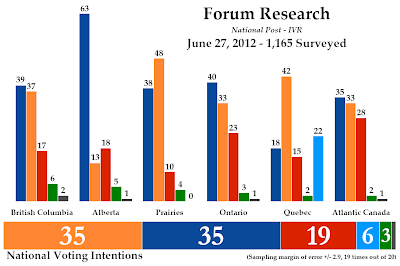 Forum pegs NDP and Conservative support at 35% apiece, representing an increase of five points for the Tories since their last poll of June 14. That is a notable bump, while the NDP's drop of two points is not. The Liberals, down three points to 19%, also saw their support shift within the margin of error.

The Bloc Québécois is unchanged at 6% while the Greens are down two points to 3%. Support for other parties stands at 1%.

The Green result is somewhat out of step with what other surveys have shown, but the party has a tendency to be over-estimated in polls of the general population, at least when compared with the voting population.

The New Democrats placed ahead of the Conservatives in the Prairies with 48% (+5), 10 points up on the Tories, who are down five points since the June 14 poll. However, this result for the New Democrats is substantially higher than what has been normally registered by other surveys in the region. The Liberals are at 10% (-9).

There have been no significant shifts in support since Forum's last poll at the regional level, but the individually insignificant Conservative gains throughout the country point to a potentially real increase nationwide. Whether this is a stand-alone result or something that we could see across other polls remains to be seen.

Despite the tie, the Conservatives come out ahead in the seat count with 148 to the NDP's 121, primarily due to their strong results in Ontario. The somewhat unusual result in the Prairies, however, gives the New Democrats the majority of the seats there.

And while the regional breakdown favours the Conservatives, the personal numbers for Stephen Harper also point to an advantage.

He is seen as the best person to be Prime Minister by 30% of Canadians, putting him ahead of Thomas Mulcair who scored 20%. Bob Rae was well behind with 10%.

A look at how this PM support breaks down by party support suggests why Harper is so far ahead of Mulcair, despite the tie in voting intentions for their parties. Fully 83% of Conservative supporters chose Harper as the best PM, with "none of them" being the next most popular result at 5%. For Mulcair, however, only 51% of NDP supporters chose him, with 15% saying "none" and 10% choosing Rae. While this gives a small indication that the NDP has the potential to leak some support to the Liberals, the Liberals seem more likely to leak support to the Conservatives. While 33% of Liberal supporters chose Rae as the best PM and 27% said "none", 12% thought Harper was the best option. Only 6% chose Mulcair.

With only 7% (-1) of respondents not knowing their opinion of Harper, he is (by far) the most polarizing figure of the three. A lot of opinion is yet to be formed about Mulcair, however, as 29% (-2) responded "don't know" on whether they approved or disapproved of his performance. At 27%, Rae's is also high but he is only the interim leader.

Among their own supporters, Harper is very popular with an 85% approval rating (unchanged). Mulcair's is up by four points, but is still well behind at 64%. Support for Rae among Liberal voters is down nine points to 60%. 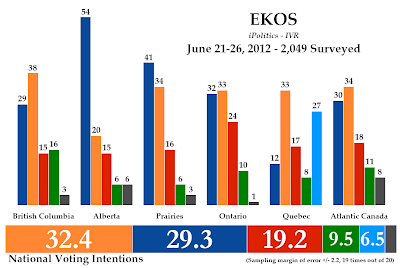 EKOS has not been heard from since their poll of Mar. 6-11, making the shifts in their latest survey more of an indication of the changing landscape between the pre- and post-Mulcair periods.

That is a statistically significant drop for the Conservatives, while the other shifts appear to be within the margin of error. But the Tories have not scored this low, or the Greens this high, in other recent polls.

The New Democrats are at 33.4% (+2.8) in Quebec in this poll, followed closely by the Bloc Québécois, up 2.5 points to 27%. The Liberals are up 2.2 points to 17.3% while the Conservatives are down 11.4 points to 11.5%, the only regional shift in support outside of the margin of error in this poll. Nevertheless, both the Conservatives and New Democrats scored far lower in Quebec in this survey than they have in other polls. 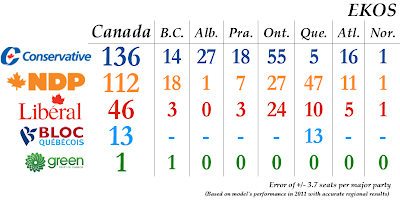 With the results of this poll, the Conservatives still come out ahead with 136 seats to the NDP's 112. Ontario is still a problem for the New Democrats, but added to that is the strong Conservative result in the Prairies and in Atlantic Canada, where the NDP is not high enough to have a swathe of seats fall into their lap. With the Liberals at such a low result, the Tories are winning a lot of those seats instead of the NDP.

These two polls do not show any major change in the landscape, though Forum hints at improving Conservative fortunes. Globally, however, the polls point to a very tight race between the NDP and the Tories with the New Democrats holding the edge, at least in popular vote. But they are not doing well enough in Ontario to be in a good position to win more seats than the Conservatives. The aggregate still gives the NDP the national edge at 34.4% to 32.5% for the Conservatives, but the Tories are up by 3.4 points in Ontario. That is more than enough to ensure a majority of seats in the growing province.
Posted by Éric at 11:03:00 AM