A look at the last seven months of polling shows a clear trend where the New Democrats experienced a big bump in support when Thomas Mulcair became leader. But is that bump starting to flatten?

The charts below plot every national poll that has been released since the beginning of 2012, each dated by their median field date. The trend line shows how the polls have shifted over that time. 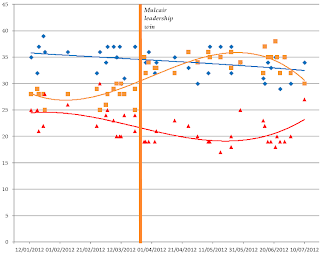 Things shifted dramatically after Mulcair became leader of the NDP, as the Liberals slipped away to around 20% while the New Democrats moved into a tie with the Conservatives and then moved ahead in June. The latest Nanos survey puts them on a significant downward trend, but the poll could be an outlier.

What is interesting to note in this chart is that the Conservatives have been generally steady, but also steadily declining. Whereas the NDP trend line is a bit of an 'S' and the Liberal line meanders a little, the Conservatives are almost on a straight (but modest) downward trajectory. 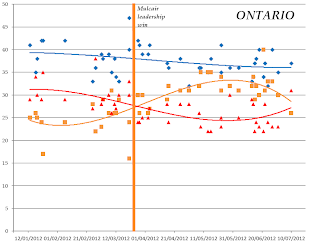 That has also been the case in Ontario, where the Conservatives have slowly slipped from around 40% to closer to 35% in the all-important province.

The New Democrats were firmly in third back in January and February, but moved into a tie as the NDP leadership convention approached. After Mulcair won, the New Democrats moved decisively ahead of the Liberals. They were also moving into the Conservative range, placing ahead of them in a few polls, but the last two surveys have sent them heading south. 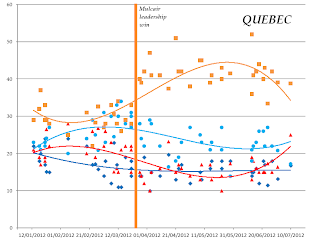 The NDP's bump in support in Quebec was most pronounced, and the fortunes of the Liberals and Bloc Québécois have shifted accordingly.

At the beginning of the year, the New Democrats had a modest lead over the other parties, who were jumbled together in second place. In February and March, however, the Bloc moved into a sort of tie with the NDP while the Liberals also saw a gain in support.

Mulcair's win changed all of that as the party stormed ahead in the polls, sending the Liberals down into a tie with the Conservatives for third place. The Bloc saw a modest drop in support, but have not been in a position to challenge the NDP for top spot in the province since Mulcair took over.

Of note, though, is that the New Democrats are experiencing a bit of a bounce-back. They have been scoring in the low 40s and high 30s since mid-June, whereas their polling numbers were in the low-to-mid-40s in April and May. Though the last survey from Nanos puts the Liberals on an upward trajectory, without it the Bloc, Tories, and Liberals have been generally flat.

These charts point to a bit of a plateau for the New Democrats, who made large gains after their March 24 leadership convention. A plateau is not a horrible thing for the NDP, as they need to solidify their support over the next few years, but it does indicate that the Conservatives and New Democrats might be at a tipping point, with the Tories near their floor and the NDP at their ceiling. Something could force either party through these barriers, or they could each return to more familiar ground. The result of the Liberal leadership race may provide that spark.

UPDATE: Due to popular demand, here are the same charts with a smoother trendline that is not so dependent on the latest Nanos poll. While it doesn't show the same sort of S-pattern for the New Democrats, the plateauing is still apparent. According to the numbers, however, the trendlines in the above charts are a better fit to the data.

UPDATE 2: There has been a lot of misunderstanding with this post. The graphic included in the original update calculated the trendline using two points instead of three, it did not remove the Nanos poll. Below, you'll see the same national chart as the one at the top of the page, but without Nanos. You'll still see that the NDP trendline is still the same sort of S-line. 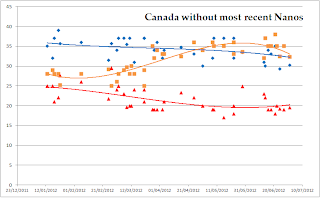