Beggars can't be choosers, and considering that we are mere days from an election call in Quebec and haven't seen a poll since mid-June, we are definitely beggars. The media, too, is starving for some numbers, considering that two internal party polls made headlines yesterday.

There are few polling firms in Canada that conduct polls both for the media and for political parties and release both sets of data to the public. For that reason, I haven't often had to grapple with the conundrum of whether to include polls ordered by political parties in my projections.

There is little reason to seriously doubt internal polls, particularly when they are conducted by real firms that would not want to sully their reputations (political polling is but a small part of what opinion polling firms do), but the information that is made available is usually quite limited. For example, we are rarely privy to the other questions asked in the polls, and if the voting intentions question was asked after some political questions, the results could be skewed. And, of course, there is the problem that political parties tend to only release their internal numbers when they are positive. You won't see a party release their internal numbers that show them losing support, meaning that by including only the good internal polls that parties release the aggregate might also be skewed in their favour.

For that reason, as a rule I don't include internal party polls in the projection. And, in any case, there is rarely the opportunity to - internal polls are often only partially leaked, meaning a lot of the information is unknown. For example, with these two internal polls released yesterday, the voting intentions of between 15% and 16% of Quebecers are unreported and there is no regional data. 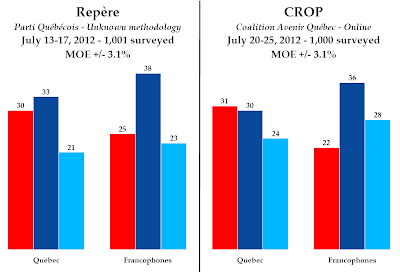 There is nothing suspicious or unusual in these numbers as they generally fall in line with what Léger reported in June, but surely it is a coincidence that the Parti Québécois felt it should release a poll that gave it a marginal provincial lead and a wide lead among francophones, while the CAQ did not mind seeing their CROP poll leaked as it put them within six and seven points of the two front-runners and comfortably second among francophones.

On the other hand, it is hardly impressive that the PQ's internal poll gave them a lead over the Liberals that is within the margin of error, while the internal CAQ numbers put the party only significantly behind, rather than completely out of it. Nevertheless, the CAQ was apparently quite excited about the result, considering CROP was in the field until July 25 and the poll was leaked on July 26.

What the two internal polls show is that the situation in Quebec has not changed very much since the last polling conducted by Léger Marketing. If we average out these two polls, we get the PQ at 31.5%, the Liberals at 30.5%, and the CAQ at 22.5%, rather close to ThreeHundredEight's current poll average of 32.1%, 32.5%, and 19.6%, respectively.

The francophone vote, however, may be shifting slightly. These polls give the Parti Québécois an average support of 37% among this important electorate, compared to 25.5% for the CAQ and 23.5% for the Liberals. While the PQ's support among francophones looks unchanged (ThreeHundredEight's current poll average for the PQ among francophones is also 37%), the Liberals are down from their average of 26.7%. The CAQ is up from 21.4%. If the CAQ is polling that high among francophone voters, that gives them a much better shot of winning some seats on the outskirts of Montreal and in central Quebec.

But these being internal polls, they really only give us a hint at what might be going on in the province. We will have to wait for the inevitable media polls by Léger Marketing and CROP to get a clearer picture of the situation.
Posted by Éric at 10:17:00 AM