Tories fall in Manitoba without McFadyen

We're in the summer doldrums of polling, so what better time to catch-up on some provincial results that fell through the cracks. In this case, a poll by Probe Research on the voting intentions of Manitobans, who were last called to the polls in October. The Manitoba-based firm finds that both the governing New Democrats and opposition Progressive Conservatives have taken a step backwards to the benefit of the third-place Liberals. 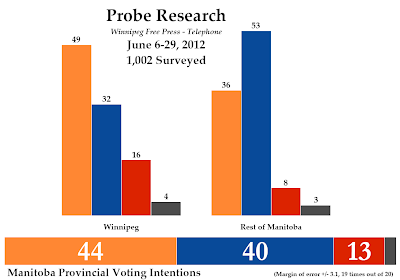 Probe was last in the field Mar. 19-Apr. 4, and since then the New Democrats picked up four points to hit 44%, only a few ticks below their 2011 election result and a drop in support within their margin of error.

The Progressive Conservatives, however, were down five points to 40%, a statistically significant drop. The Liberals made up the difference, gaining three points to reach 13% while other parties (primarily the Greens, though Probe does not specifically report their results) were up two points to 3%.

The province remains regionally and demographically divided between the two main parties. The Tories were ahead among men by five points while the New Democrats were up among women by 11. The New Democrats had the edge among people aged 18-54, those with a post-secondary education, and voters who make less than $59,000 per year or more than $100,000. The PCs, on the other hand, got the nod from the oldest Manitobans, high-school educated voters, and those who earn between $60,000 and $99,000 per year.

Regionally, the New Democrats held the lead in Winnipeg with 49% (+1). This puts them well ahead of the Tories, who trailed with 32% (-3). The Liberals were up five points to 16%, the main source of their gain and a statistically significant one. Breaking down the capital into neighbourhoods, the New Democrats held a lead over the Tories in the northeastern, southeastern, and core parts of the city (the Liberals placed second in this last sector), and were ahead (but not more than marginally so) in the northwestern and southwestern parts. The Liberals had their best results, at 22% and 25% respectively, in southeastern Winnipeg and the core of the city.

Outside of Winnipeg, however, the PCs led with 53%, down seven points. The NDP was up a notable eight points to 36%, while the Liberals were up one point to 8%.

Aside from an extra Liberal seat in Winnipeg, the make-up of Manitoba's legislature would not change with these numbers. The New Democrats continue to dominate in Winnipeg and northern Manitoba, while the Progressive Conservatives win the majority of seats in the southern part of the province.

Neither the Progressive Conservatives nor the Liberals have a permanent leader at the moment, as both Hugh McFadyen and Jon Gerrard have stepped down. McFadyen announced his resignation shortly after the election results came in, and has recently vacated his seat of Fort Whyte. Gerrard, on the other hand, announced his impending resignation earlier this year but will be sticking around until a new leader is chosen in 2013. Taking over that party and leading it into better days will be no small task, while the next leader of the Tories has a good shot of becoming the next Premier - the New Democrats will have been in power for 16 years by the time Manitobans are next called to the polls.

In the meantime, though, it would appear that Greg Selinger is holding down the fort. His party has an intrinsic advantage because of how the province's seats are divided. The NDP could still win an election despite being down a few points in the popular vote because of their wide lead in Winnipeg. The last election hinted at this state of affairs, as the New Democrats won a larger majority than they did in 2007 with a much smaller lead over the Tories. The next leader of the Progressive Conservatives will have to break into Winnipeg if he or she is to have any hope of ending what could be an NDP dynasty in Manitoba.
Posted by Éric at 9:36:00 AM