If you'll allow me a little immodesty, the projection for the 2011 Manitoba provincial election was ThreeHundredEight's Mona Lisa. Tongue firmly in cheek, of course, but of the 57 ridings in the province, 56 were called correctly and the 57th was so close that it is currently under judicial review.

The Manitoba election might seem trivial to people who aren't one of the 1.3 million Manitobans in the province, but this was an election that was thought to be very close. It was an election that demonstrated perfectly the usefulness of seat projections, as though the polls pointed to a tight race my seat projection model indicated that the New Democrats could win a comfortable majority with an uncomfortable margin in the popular vote. And, as I will show, this projection was no mere accident or stroke of luck. Even at the individual riding level the projection model performed very well.

In the end, Greg Selinger's New Democrats won an even larger majority than was projected, defeating Hugh McFadyen's Progressive Conservatives. Jon Gerrard, leader of the Manitoba Liberals, was the only candidate elected for that party.

ThreeHundredEight projected 36 New Democrats would be elected, 20 Progressive Conservatives, and one Liberal.

The result was 37 New Democrats, 19 Progressive Conservatives, and one Liberal. Using the actual provincial vote tally did not change the projection. 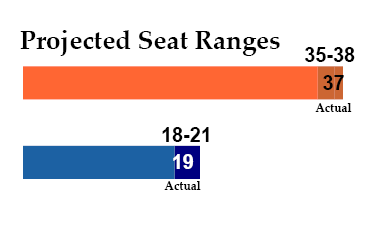 As the polls by Probe Research and Angus-Reid at the end of the campaign were excellent, the vote projection was excellent as well. It under-estimated Progressive Conservative support by one point, but was within 0.6 points for the New Democrats, Liberals, and Greens. 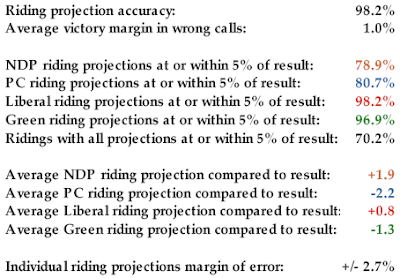 The margin of victory in St. Norbert, the one riding incorrectly called, was only one per cent.

To compare to the Prince Edward Island election, less than 30% of those ridings had every party called to within 5% and the average margin of error was +/- 4.6%.

Many ridings were called very well, but here are the top three: 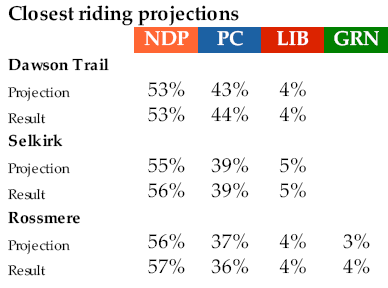 In Dawson Trail and Selkirk, the projection was only off by one point for the three parties running. This is a good time to remind readers that the boundaries in Manitoba changed since the 2007 election, compounding the difficulty in making accurate projections.

Rossmere was off by a total of three points across four parties.

Now, what of St. Norbert, the one riding that got away? As mentioned, a judicial recount will take place and the results revealed on October 24. So, it could be that the result will be overturned and the projection will end up being 100% accurate. Note also that the vote in Kirkfield Park, which was correctly called, will also be reviewed. Hopefully that one won't be overturned.

If the result is not overturned in St. Norbert, why did the projection get it wrong? St. Norbert only bucked provincial trends by the tiniest amount, and it appears that the lack of an NDP incumbent did not hurt the party at all. But removing that factor still would have given the riding to the Tories.

So, it would appear that local factors were at play. Perhaps a good performance by Dave Gaudreau, the NDP candidate, or a less than good performance by Karen Velthuys, the Tory candidate, is to blame. Handing Gaudreau the star candidate bonus would have given him the riding, but he doesn't fit the profile of a star candidate and Velthuys does not seem to have been especially problematic.

The wrong call in this one riding needs to be attributed to the fact that the model cannot precisely predict how thousands of individuals will behave. St. Norbert being the one wrong call is, I think you'll agree, perfectly acceptable.

It should come as no surprise that the 2011 Manitoba provincial election projection is the best of the seven that ThreeHundredEight has called. And that is by a wide margin - the per party error on the vote projection was almost half the error of the next best called (2008 Quebec election) and the per party seat error was almost one-third of that in the 2008 Quebec election. I do not consider it likely that the projection model will ever provide a better result than it did in Manitoba.
Posted by Éric at 10:31:00 AM