Quebec Liberals move ahead under Couillard (and Trudeau)

Earlier this week, La Presse released the latest results of CROP's political polling in Quebec. The results show a striking uptick in Liberal support, both at the provincial and federal levels. 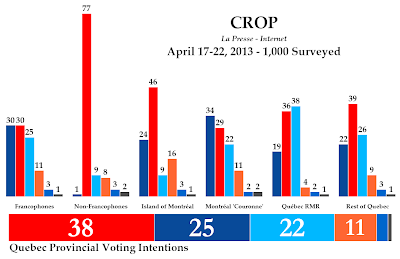 CROP was last publicly in the field in February, and since then the provincial Liberals picked up eight points to move into the lead with 38%. The Parti Québécois dropped five points to 25%, while the Coalition Avenir Québec also fell five points to 22% support.

Québec Solidaire was up two points to 11%, while Option Nationale had 3% support (this is the first CROP poll to list them specifically, they used to be included with the "other parties").

Clearly, the arrival of Philippe Couillard has boosted Liberal numbers. Though the results weren't put out publicly, CROP was already showing a small uptick in Liberal support in the days just before his leadership win. Between March 13-18 (Couillard was named leader on the 17th), the PLQ had increased from the 30% of February to 31%, while the PQ was down from 30% to 29% (the CAQ had dropped to 25%). Those changes were all within the margin of error (or would be, with a comparable probabilistic sample), but the trend was heading in the same direction.

Despite their 13-point lead provincewide, the PLQ was not leading in every region in this poll. They were in the lead on the island of Montreal with 46% (+12 from February), while they were narrowly ahead in the regions of Quebec outside Montreal and Quebec City with 39% support (+10).

The Parti Québécois, however, was narrowly in front in the 'couronne' of Montreal (Laval and the surrounding shores) with 34%, while the CAQ was ahead in Quebec City with 38%. Though Couillard does not seem to have boosted the Liberal numbers in the couronne, he did bump the PLQ up by 10 points in Quebec City to 36%. The PQ had to drop nine points to 19% to make that happen, and the PQ also paid the price in the rest of Quebec with an eight point drop.

Amazingly, considering where the Liberals were polling under Jean Charest, Couillard has put them in a tie with the PQ among francophones with 30% apiece. That is a nine point gain for the Liberals since February, and a five point drop for both the PQ and the CAQ (who fell to 25%). That opens up a lot of possibilities to the Liberals.

Couillard has become the most popular provincial political leader in the province, with 28% considering him the best person to be premier. That compares to only 16% for Pauline Marois and 14% for François Legault. In March, Marois and Legault were tied at 20% apiece, while Jean-Marc Fournier had 11% (he was interim leader at the time, and now heads up the PLQ in the National Assembly as Couillard does not hold a seat). 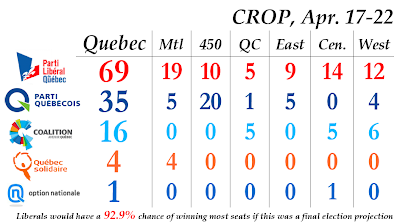 But he would have an easy enough time winning one if an election were held today, as with these CROP regional numbers the model gives the Liberals 69 seats and a majority government. The Parti Québécois takes 35 seats while the CAQ is reduced to 16. Québec Solidaire wins four seats, while Option Nationale takes one.

(Note: Jean-Martin Aussant is projected to win his riding of Nicolet-Bécancour in this projection. The problem is he won't be running there next time. He has decided to try his luck in a Montreal seat, but until that seat is known the model will continue to assume he is running in Nicolet-Bécancour.)

The Liberals manage to win seats throughout Quebec, taking less than half in and around Montreal. The PQ wins the bulk of their seats in the suburbs of the metropolis, while the CAQ keeps most of its seats in Quebec City, central Quebec, and the Laurentides/Lanaudière region.

But Couillard is not the only popular Liberal in Quebec - the poll shows that Justin Trudeau has made huge inroads in the province as well, primarily at the expense of the NDP. 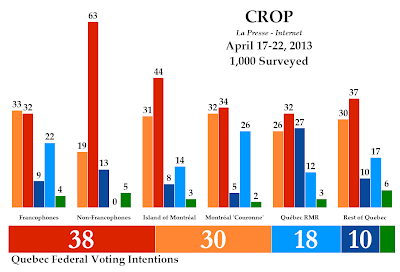 CROP found the Liberals to have the support of 38% of Quebecers, up 19 points since March. The New Democrats dropped nine points to 30%, while the Bloc Québécois fell three points to 18% and the Conservatives dropped five points to 10%.

These are not easy numbers for the New Democrats to ignore. CROP was the first pollster to record the party's surge in the 2011 election in the province, and they have routinely given them the best numbers of any of the pollsters inside or outside of Quebec.

Between October and March, the Liberals averaged only 20% in Quebec in CROP's polling, while the NDP averaged 38%. In that same time period, all other polls done in the province gave the Liberals an average of 25% and the NDP only 32% support. For CROP to have the NDP trailing the Liberals by eight points, when in the past they gave them a positive spread more than twice the size of other firms, is something significant.

We'll see how long it lasts, however, as the regional numbers in this survey point to either a very unusual result or a complete change in how Quebecers view federal politics (of course, it would not be the first time that has happened).

The federal Liberals were ahead in every part of Quebec, with 44% on the island of Montreal (+22 since February), 34% in the couronne (+9), 32% in Quebec City (+16), and 37% in the rest of Quebec (+13). Seeing the Liberals ahead on the island is not too shocking and having them in front in the suburbs is believable, but beating the Tories in Quebec City and the Bloc (and the NDP) in the regions of Quebec? Trudeau will have had to completely transform the perception of the Liberal Party of Canada in the province for this to be true. But isn't to say that it isn't true.

The New Democrats had relatively uniform support throughout the province, which could be dangerous if it means losing a lot of seats by narrow margins (they did the opposite to the Bloc in the 2011 election). The Conservatives had horrific results everywhere but Quebec City, while the BQ was only competitive in the Montreal suburbs (where they currently hold zero seats).

Among francophones, the NDP barely edged out the Liberals with 33% to 32%, while the Bloc came in third with 22% (du jamais vu...). That represented a drop of seven points for the NDP since February and a gain of 13 for the Liberals.

Among non-francophones, Trudeau's arrival has boosted the Liberals by 16 points since February to 63%, most of that coming from the Conservatives, who dropped 17 points to 13%. The NDP has been sliding among this demographic for some time, and in fact only dropped one point since February.

On who would make the best prime minister, Trudeau narrowly edged out Thomas Mulcair with 29% to 27%, while Stephen Harper rounded out the list with just 10%. CROP's polling also showed that Trudeau stacked up well against Mulcair on many issues, but that generally Quebecers felt the NDP leader to be a better adminstrator while Trudeau had better personal qualities (rassembleur, trustworthy, etc.).

In terms of seats, the model might be a little hamstrung. It is not set up to incorporate sub-regional data at the federal level (something that will have to be rectified by 2015). But with the province-wide results, the New Democrats would win 41 seats, the Liberals would take 31, the Conservatives would hold four, and the Bloc Québécois would take two. However, considering that the Liberals were ahead of the NDP in every region of Quebec, it is likely that the model is under-estimating the number of seats the Liberals could win. Incumbency is a factor, though, that will play into the NDP's hands. Of course, if Trudeau is on track to win the next election he might also be able to recruit a strong field of candidates to negate the NDP's intrinsic advantage.