Over the long weekend, a new Forum poll was published by The Toronto Star, showing that the race in Ontario remains close. But the Progressive Conservatives and Liberals appear to be widening the gap between themselves and the New Democrats, decreasing the incentive Andrea Horwath might have had to defeat Kathleen Wynne's minority government.

Methodological note: the report from Forum Research is the usual, with plenty of cross-tabs but lacking unweighted sample data. Forum is not alone in this, as only Abacus Data and Ipsos-Reid routinely release unweighted data with their polls. Some other pollsters release the data on request, but in general disclosure is rather limited in Canada.

That makes it perhaps unfair to single out Forum, but they are one of the most active firms and IVR polling is, generally speaking, more susceptible to distorted sampling. We've seen this before - throughout the Quebec election campaign, telephone and online pollsters Léger Marketing and CROP had more stable results than Forum's IVR numbers, which varied more widely. That makes it all the more necessary to have this unweighted data, to help determine whether any fluctuations are real or not. But other firms need to up their disclosure as well. Even some of the most respected polling firms in Canada fail to release data as basic as regional sample sizes. 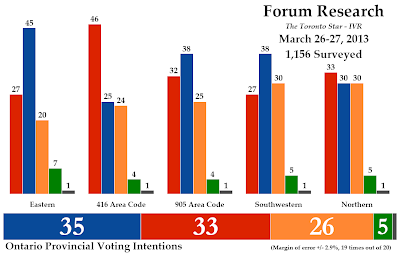 Forum was last in the field provincially between Feb. 26 and Mar. 1. Since then, there have been no statistically significant changes in support. The PCs picked up three points to reach 35%, the Liberals increased one to 33%, and the NDP was down three to 26%.

The trend is important, however, as the gap is widening between the two larger parties and the New Democrats. And the NDP has placed third in six of the seven polls that have been released since Wynne became Liberal leader.

There is a hidden advantage in these numbers for the Tories, as they were ahead by six points or more among Ontarians aged 45 and older. There is still a gender gap, however, as the PCs were first among men (by a wide margin) but third among women.

The Liberals led in Toronto with 46% support, well ahead of the PCs at 25% and the NDP at 24%. The Liberals were also narrowly ahead in northern Ontario, with 33% to 30% apiece for the Tories and NDP (note that in Forum's poll, northern Ontario stretches all the way south to Lake Simcoe).

With these regional numbers, the Progressive Conservatives would win 47 seats to 40 for the Liberals and 20 for the New Democrats.

Forum's seat projection model gives the Liberals the plurality of seats (they lose three) while the NDP drops to only 14, despite being several points up on their 2011 election result. Regional distribution cannot be blamed, as the NDP improved upon their 2011 numbers in every region except Toronto, where the Liberals were also down and the PCs were up (but uselessly so). I don't understand how it is possible for them to have these sorts of numbers, and if the Star knows they should tell the rest of us. With these counter-intuitive results, they probably shouldn't publish them if they don't know.

Why these numbers are deceptive, though, is due to the other questions Forum asked. When it comes to which leader shares respondents' personal values, Hudak and Horwath tied for 22% with Wynne at 21%. On who respects democracy, Horwath narrowly edged out Hudak with 22% to 20%, with Wynne at 18%. And on who is best able to handle the economy, Hudak was ahead of Wynne with 24% to 23%. Horwath was well behind at 15%.

This would seem to suggest that while Ontarians like Wynne and Horwath a lot more than Hudak, they don't consider them better leaders. That is a silver lining for Hudak, particularly his good showing on the economy.

But the PCs have made it clear they want to defeat the government, so Hudak might not be looking for a silver lining. The power to send Ontarians to the polls is in Horwath's hands, and with these numbers she has little incentive to do so.
Posted by Éric at 11:24:00 AM