Over the weekend, Léger Marketing released new numbers for the Alberta provincial scene for the Calgary Herald and Edmonton Journal. The numbers are not good for Alison Redford, just as they haven't been in the latest polls on her approval ratings as premier.

Yes, this is Alberta and we all remember what happened in Alberta last year. But that wasn't just a case of polls being wrong. Other things were at play, including an undeniable late swing in voting intentions. Arguably, some pollsters did miss the swing in their final polls when they should have been capturing at least some of it. But Léger Marketing is free from blame - their last poll was out of the field a full week before the vote.

I wrote about this poll for The Huffington Post Canada, and I go into more detail about the numbers there. But let's take a look at the topline and regional results here. 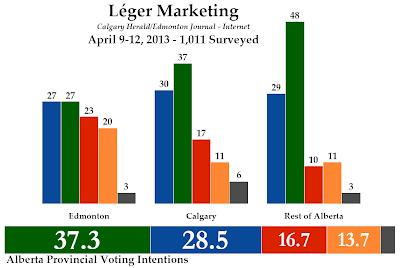 Léger was last in the field in January with a telephone poll, but have changed methodologies to use an internet panel this time. Comparing the two polls, then, is a little bit of an apples to somewhat different apples exercise.

Nevertheless, since then Wildrose picked up nine points to lead with 37.3% support. The Progressive Conservatives dropped 11 points to 28.5%, while the Liberals were up five points to 16.7%. The New Democrats were virtually unchanged at 13.7%, while support for other parties dropped a little to 3.8% (this would include the Greens and the Alberta Party).

The race is very tight in Edmonton, where the Tories and Wildrose were tied at 27% apiece (Léger's January poll had no regional results). That represents a drop of around 17 points for the Tories since the election, and a gain of four points for Wildrose. The Liberals made the biggest gain, picking up 10 points to hit 23% while the NDP was up three points to 20%.

In Calgary, Wildrose held firm at 37% but the PCs dropped 15 points to only 30% in the city. The Liberals and NDP were each up six points, to 17% and 11% respectively.

And in the rest of Alberta, Wildrose was up marginally by five points to 48% while the Tories dropped 14 points to 29%. The NDP was up four points to 11% while the Liberals were up five to 10%.

The Progressive Conservatives have taken a big hit everywhere. They are still relatively competitive in Edmonton and Calgary as voting intentions are divided four ways, but outside of the two cities the yawning gap between Wildrose and the PCs means that Redford loses a lot of seats.

With these numbers (and recall that the seat projection model was quite accurate with the actual regional results plugged into it), Wildrose would win around 54 seats and form a majority government.

The opposition would be slightly more robust than it is now, however, with 17 Tories, 10 Liberals, and six New Democrats.

Wildrose wins half of its seats outside of Edmonton and Calgary, but still wins the majority of seats in Calgary and the plurality in Edmonton. The Tories take 14 of their 17 seats in the two cities, while Edmonton is responsible for 12 of the 16 seats that the Liberals and New Democrats win.

What is notable about this poll is not that Wildrose is taking off - their gains were relatively modest and they gained no ground in Calgary - but rather the PC vote has collapsed. A silver lining for Redford is that a lot of  it is going to the Liberals and NDP, where it might be liable to come back by election day in order to stave off a Wildrose victory (similar to what occurred last year). But Redford's personal numbers have tanked, whereas they were still pretty good even in the middle of the campaign when the Tories were trailing Wildrose by double digits. A party can rebound more easily when it is led by a popular leader. When it isn't, it is doubly hard to make up lost ground. But Redford has time: the next election won't be held until 2016.
Posted by Éric at 11:45:00 AM