Resiliency for B.C. Liberals in the Interior?

The newest projection for the now on-going election campaign in British Columbia continues to have little good news for the B.C. Liberals, as the B.C. New Democrats remain well in front and with a roughly 98% chance of winning on May 14. But a new riding poll for the two seats in Kamloops suggests the B.C. Liberals may be more difficult to knock off in some ridings than expected.

The projection now incorporates all of the new polling that was released for the start of the campaign, from EKOS, Angus-Reid, and Ipsos-Reid. But there have been no major changes: the NDP is projected to be between 46.1% and 49.7% support and capable of winning between 57 and 73 seats, based on current polling data. The B.C. Liberals trail with between 28% and 31.2% support and between 10 and 27 seats. More precisely, the NDP stands at 47.9% and 65 seats to 29.6% and 19 seats for the Liberals.

The other parties trail at some length, with the B.C. Conservatives between 10.6% and 13% support and the B.C. Greens between 7.9% and 9.9%. Neither are currently projected to be in the running for any seats, but the forecast gives the Greens a high of four seats and the Conservatives a high of one. Unfortunately for Christy Clark, her high forecast is only 37 seats - short of a majority.

For a broader analysis of the trends and the projection, please read my article this morning in The Globe and Mail.

Before going into the three province-wide polls, a new survey by Oraclepoll commissioned by The Daily News in Kamloops is worth a look. The poll was conducted between April 12 and 14 and surveyed 300 people apiece in the ridings of Kamloops-North Thompson and Kamloops-South Thompson via IVR. Unfortunately, the polls did not include a Green candidate in either riding as any have yet to be named.

This poll has been included in the projection, but both ridings had been considered to be relatively easy victories for the NDP by the model. Both are now a bit closer with the inclusion of this poll, but it suggests that the B.C. Liberals may not be so easy to knock off in the Interior. We saw something similar happen for the Alberta Liberals in Calgary and Edmonton and the Quebec Liberals in central Quebec. In both cases, the Liberals were able to hold on to a lot more of their support than expected, while their vote tanked where they did not hold a seat. Could the same thing happen here?

How a Green candidate would change things up is uncertain. It might drag the NDP's vote down a bit, but also the Liberals'. There is some indication that much of the Green support is coming from disaffected Liberals who do not see themselves in the Conservatives but won't support the NDP.

The support for the Conservatives in these two ridings should be of some concern for the party. Not that these were serious targets for the party - they weren't - but it should be disappointing to them that they are not even close to being in the running in two B.C. Interior ridings. In Kamloops-South Thompson, they haven't been able to take greater advantage of the lack of a Liberal incumbent, the sort of situation that should give the Conservatives more of a chance. Their support in the Interior would need to double before the Conservatives could start thinking of winning that riding.

For the NDP, their score in Kamloops-South Thompson is virtually unchanged from 2009, despite their uptick in support. That suggests that the NDP may not be able to make inroads throughout B.C., and that more than a couple ridings where they are pegged to be ahead by a narrow margin could be difficult ones for them to win.

Hopefully we'll see more riding polls from the Interior to shed some more light on this. 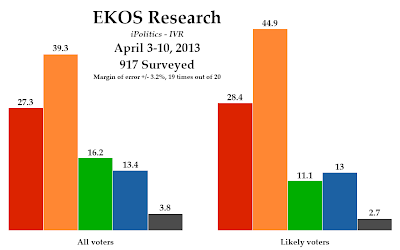 For the provincial polls, we'll start with EKOS. They are doing something interesting, reporting their results for the entire population but also just likely voters. Likely voters are primarily those who voted in the last federal election, but EKOS does some other calculations to model what the voting population will look like as opposed to the general population. As the purpose of the projection is to predict the outcome of the election, and not what all British Columbians think, the projection will only be using the 'likely voter' numbers from EKOS.

The big question with these numbers is whether other firms are already doing some of these calculations. It seems that some of them are, so EKOS is merely showing a little bit more about how the sausage is made.

But in terms of the general population, EKOS shows little change from their last poll from February. And their likely voter numbers are well within the norm of other surveys. Of note: the NDP leads by four points among men but 20 points among women. They also lead in every age group except among those over the age of 65, where the Liberals have the advantage. 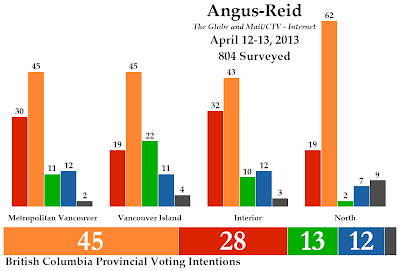 The new Angus-Reid poll also shows little change from their last survey, conducted in mid-March (NDP down three, Liberals unchanged, Greens up two). They do show a drop in Adrian Dix's approval rating, however, which could be something to keep an eye on.

This poll had the much ballyhooed result of the Greens in second on Vancouver Island, with 22% to the Liberals' 19%. Considering the sample sizes, it is not much of a lead. And it is counter to what Ipsos-Reid found (see below).

Angus-Reid shows the same gender split as EKOS, with the NDP up by 11 among men but 25 among women. Perhaps most importantly, their respondents rated Dix more highly than Clark on the economy (27% to 22%). 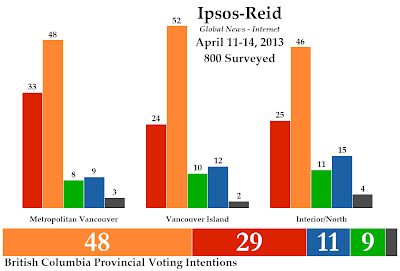 Ipsos-Reid has shown a little more change since its last poll of mid-March, but it is still within the margin of error (or would be, if this was a probability sample). Ipsos has the NDP and Liberals down three points apiece, and the Greens and Conservatives up two each.

Again, we see the gender divide: the NDP up by seven among men, but 31 among women. And they lead by 17 points among those aged 55 or over (i.e., voters).

The approval ratings (30% for Clark, 51% for Dix) show no real change, but both Jane Sterk and John Cummins had increases (to 28% and 19%, respectively). Note that in the rolling three-poll average of approval ratings, Sterk now rates more highly than Clark.

Also problematic for Clark is that 43% of British Columbians strongly disapprove of her. That is a huge number. And 58% of respondents expect the NDP to win a majority (they must be ThreeHundredEight readers), compared to only 8% who expect the Liberals to be re-elected to a majority. Perception can be everything.

The regional result on Vancouver Island is worth noting, as it differs from Angus-Reid's. The two polls put the Liberals and Conservatives at roughly the same level of support, but the big difference seems to be between the NDP and the Greens. But if this were a random sample, the margin of error would be over eight points - so maybe this is much ado over nothing.

What is perhaps most remarkable about these polls is that they have been more or less identical for the last seven months. The opinions of British Columbians seem pretty solidified. With such unusual consistency, it may be too much to expect the Liberals to overcome such a huge margin in just four weeks.
Posted by Éric at 11:09:00 AM