Friday update: By-elections in Labrador and close race in Ontario

In this week's Friday update: a new poll for the Labrador by-election, a forecast for the provincial by-election in Cartwright-L'Anse au Clair in Newfoundland and Labrador, and a look at a very close race in Ontario. Are the Greens about to breakthrough? (No, but some interesting numbers nonetheless.)

A poll was released earlier this week by Abacus Data, done for VOCM (a radio station in the province). The results confirmed both what Forum Research's IVR poll (Abacus did one with live-callers) and what the regional swing would have us believe to be a likely outcome. 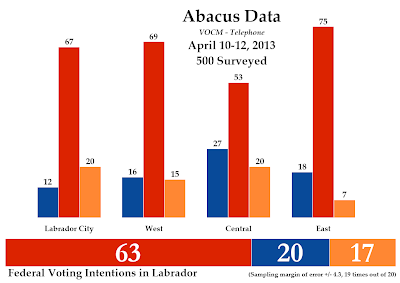 The poll gives an even wider lead to Yvonne Jones, with 63% to 20% for Peter Penashue and 17% for Harry Borlase of the NDP.

Abacus broke it down regionally, and you can see that the Liberals are way ahead throughout the province. To give it some context, their best performance in the poll was in eastern Labrador, where the Liberals did best in 2011. The NDP seems to have dropped a little in Labrador City, which had given the NDP good numbers in the last federal election, while the Conservatives are only slightly competitive in central Labrador, which had been more or less split between Penashue and Todd Russell of the Liberals in 2011.

There are no good numbers for the Tories in this poll, as only 29% of respondents said they would consider voting for the Conservatives (and only 58% of those who voted for them in 2011), compared to 60% for the Liberals (and that doesn't include the "don't knows").

The poll does suggest that the Conservative strategy for the by-election is reasonable, however, with Penashue emphasising his ability to deliver for the riding as a cabinet minister. Fully 60% of respondents in poll agreed that Labrador is better served with a government MP. Nevertheless, they don't seem willing to vote for one.

Due to Yvonne Jones running as the federal Liberal candidate in Labrador, her provincial riding of Cartwright-L'Anse au Clair in eastern Labrador is vacant. 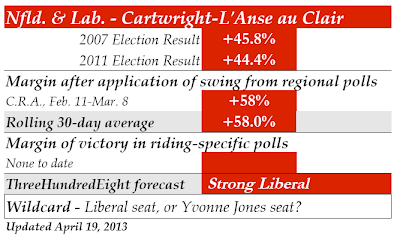 This should be an easy win for the provincial Liberals. The party is still trailing the PCs and NDP by a wide margin province-wide, but the Tories have dropped significantly and they have traditionally been the main opponent to the Liberals in the riding.

Jones has represented Cartwright-L'Anse au Clair since 1996, and has won with huge majorities taking more than 70% of the vote in the last two elections.

The Liberals have held the riding since 1975, after the Labrador Party held it for one term. The riding would seem to be a Liberal stronghold, but Jones has represented it for so long that it is difficult to know for certain whether it is still a primarily Liberal riding or just a Jones riding. She was, after all, first elected as an independent by defeating the incumbent Liberal MHA.

It seems unlikely the Tories are in the running. Their support has plummeted in recent months. The New Democrats, however, have been surging and have led in a few of the recent provincial polls. The NDP only took 2% of the vote in 2011, the first time they had run a candidate in the riding since the 1990s. But now that Jones won't be on the ballot, how many voters would consider going with the NDP this time around? If the New Democrats find a great candidate - and the Liberals don't - they could have a serious shot. They will certainly be gunning for the riding, as a win would vault them ahead of the Liberals in the seat count in the House of Assembly (and potentially land them Official Opposition status).

But because of the numbers that Jones put up in the last election and the favourable trends, the model considers this riding to be a Strong Liberal seat. I don't suspect anything will happen to change the model's mind.

EKOS released a provincial poll for Ontario earlier this week, and I wrote about the implications in an article for The Huffington Post Canada on Wednesday.

The poll does not show much difference from the other surveys we've seen since Kathleen Wynne became premier and Liberal leader. It gave the Tories 31.7% to 30.8% for the Liberals and 25.5% for the New Democrats. The Greens managed 9.7%, the only really unusual number. Most surveys have been showing a close race between the PCs and the OLP with the NDP in the mid-20s, so there is nothing much new here.

Adding it to the By-Election Barometer, however, changes the status of Windsor-Tecumseh from a Strong NDP riding to a Likely NDP win. The Liberals had a bit of a better result in southwestern Ontario in this survey.

In terms of seats province-wide, though, the Progressive Conservatives would barely eke out a plurality with 41, while the Liberals would take 39 seats and the New Democrats 24.

And the Greens would win three seats with 9.7% support, which rises to as much as 17% in the northern part of the province (which, in my model and in the estimations of EKOS and several other pollsters, includes the area stretching all the way down to Lake Simcoe).

Would the Greens actually win three seats if an election were held today? Almost certainly not - EKOS only gives the Greens 5.7% support among "likely voters", and at that level their seat count would drop to zero. But it is interesting to see that the Greens aren't too far away from potentially being competitive in a handful of ridings. If the provincial Greens make a splash in British Columbia's election on May 14, I would not be surprised if Green parties throughout Canada gain a little lustre.