There have been few major changes in the projection and forecast for the British Columbia provincial election, but all that means is that the time remaining for the B.C. Liberals to turn things around has continued to shrink. The odds that the party would be able to comeback and beat the B.C. New Democrats in the popular vote are still less than 50-to-1.

Problematic for the Liberals is that the high forecast for May 14 has fallen from 54 to only 43 seats - the bare minimum for a majority government. As time runs out, even the absolute best case scenario is precarious for the party. 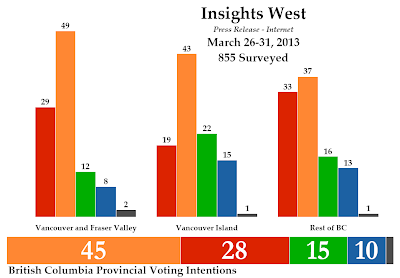 The update was brought about by a new poll from Insights West, a polling firm based in British Columbia that was launched last year and whose president had previously been with Ipsos-Reid. This is their first foray into provincial politics, as far as I can tell, and the results are well within the norm of what other surveys have shown. Insights West also has very good disclosure, with its report containing both weighted and unweighted samples. They use their own panel for their polling.

The Conservatives being at 10% is interesting, in part because it is within two points of where 10 of the last 11 polls have pegged the party's support to be. Why is that interesting? Because the UBC prediction market has consistently had the Conservatives at or just under 20% since mid-March. Whatever the market is recording, the polls have yet to see.

One in five respondents were undecided in this survey. The undecideds did lean slightly to the B.C. Liberals (25% to 20%), but not nearly enough to make much difference. The gender gap remains, with the NDP enjoying an 11-point advantage among men but a 24-point edge among women. They also lead by 18 points among voters aged 55 and over, a key demographic.

At the regional level, there are few surprises in this poll. The New Democrats are well ahead in both Vancouver and on Vancouver Island, while the race is closer in the Interior and North. The strong Green result on Vancouver Island has been noted before in other polls, though this is the highest result I have on record.

Steady as she goes, then. The campaign will need to shake things up radically in order to put the result in any doubt, but it will be interesting to see where the Green numbers go from here. For many British Columbians, voting for the Greens might become a very plausible option if the NDP looks like it is set to easily win - their vote might not be wasted or inadvertently send a Liberal to Victoria. Too much of that sentiment in NDP-Liberal races, though, and the New Democrats could be in trouble in a few individual ridings.
Posted by Éric at 12:05:00 PM