Approval ratings for 30 premiers and leaders

Angus-Reid's quarterly polls on premier approval ratings are always interesting, but this week they made it even better by releasing the approval ratings for all major party leaders in nine provinces (poor PEI was excluded, as even with a 7,000+ national sample the number of respondents would be tiny on the island).

It isn't the first time that these numbers have been released, as Angus-Reid was kind enough to provide me with them back in September. But hopefully they will continue to do this every quarter, as it provides a great deal of information. 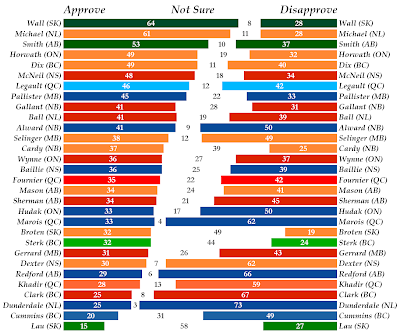 Three of the top five have not changed since September: Brad Wall, Lorraine Michael, and Adrian Dix. Only Wall, Michael, and Danielle Smith have a better than 50% approval rating, while all others have under 50%.

Note that the leaders of Québec Solidaire and the Quebec Liberals are not correct in this poll. That is understandable for the Liberals, who chose Philippe Couillard as their new leader (replacing interim leader Jean-Marc Fournier) in the midst of this polling. Khadir, however, should have been replaced by Françoise David. Khadir is no longer the male spokesperson for the party, and in effect the female spokesperson (David) is the de facto leader. I suspect she would have had a much higher approval rating than Khadir, and might have cracked the top ten.

It is hard to find any partisan advantage in these numbers. Conservatives like Wall, Smith, and Brian Pallister are ranked highly, while Clark, Dunderdale, and John Cummins are at the bottom. Stephen McNeil, Brian Gallant, and Dwight Ball score well for the Liberals, while John Gerrard and Raj Sherman do not (and you might include Clark with them as well). The NDP has three of the top five in Michael, Andrea Horwath, and Dix, but also Dexter in the bottom tier.

There does seem to be an anti-incumbent bias in the numbers, as nine of the top ten are third party or opposition leaders, while five of the nine premiers are ranked 20th or lower. There doesn't seem to be a gender bias, though: Redford, Dunderdale and Clark are at the bottom of the list but Michael, Smith, and Horwath are at the top.

Who has made the biggest gains since the September poll? If we look at it only in terms of ranking, we see that Ball made the biggest gain, jumping 18 spots to 10th overall. Gallant is ranked 17 spots higher than interim leader Victor Boudreau was, while Dominic Cardy gained ten spots to move into the top half of the list. Atlantic Canadian leaders were on the move.

The leader that had the largest fall was Redford, who was ranked second in September but is now ranked 25th. Her approval rating has just plummeted in the last few months. Dunderdale also fell, by 17 spots, to 28th, while Marois and Cam Broten (compared to John Nilson) each fell eight spots to 20th and 21st overall. Wall, meanwhile, held on to top spot while Cummins and Victor Lau were unchanged as the bottom two on the list.

But is an approval rating the best way to measure these leaders? Broten, for example, was just recently named leader of the Saskatchewan NDP and his approval rating of 32% is actually quite decent, considering his disapproval rating is only 19% (49% have yet to make up their minds).

The chart to the left ranks leaders by their net approval rating (approval minus disapproval) and it changes things quite a bit. Edit: An earlier version of this post had incorrect net ratings for Wall and Sterk.

Broten makes the biggest move, increasing by 15 spots to sixth overall. Sterk also jumps 13 spots, as she has a large "not sure" total as well.

Most other premiers are ranked below two opponents: Dunderdale, Clark, Redford, Dexter, Marois, and Alward are all third or fourth in their province. Selinger is ranked just a little more highly than Gerrard, while Kathleen Wynne is ranked much more highly than Hudak (though she trails Horwath).

Approval rating is a pretty important indictor of ability to win. If an election were held today, based only on voting intentions polls, the approval ratings leaders (not net ratings) in every province except Ontario and Quebec would win (and we can't even say that with certainty about Quebec, as Couillard might have ranked more highly than François Legault).

These rankings aren't anything to sneeze at - if the elections in B.C. and Nova Scotia go as expected, premiers will take up three of the top six spots in the approval ratings rankings in a few months. And if these ratings continue, one has to wonder whether some of the other leaders at the bottom of the list (Redford, Dunderdale, Cummins, maybe Hudak) will be on their way out in the next year or two. Gerrard is already leaving and is just waiting for his replacement, while Khadir shouldn't have been included at all. That accounts for seven of the bottom 10 spots in the approval ratings ranking, and eight in the net ratings ranking.

Are approval ratings the kiss of death? Possibly - three of the four names that have disappeared from the list since September were ranked 17th or lower.
Posted by Éric at 12:16:00 PM