Before getting too excited after reading this headline, Liberals should know that they are only ahead by 0.1 percentage points and that this is using this site's weighted poll aggregation methodology. And they have only been put in first place in a single poll (the aggregation does not take into account polling that includes Justin Trudeau as Liberal leader). And if you do a straight-up average without taking anything else into account, you can only go back two polls to give the Liberals the lead (going back a third puts the Conservatives ahead by 1.7 points).

But with those caveats laid out, that the Liberals have moved ahead in the polling aggregation for the first time since the election - a methodology that has been consistently employed - is rather remarkable. It could also be a blip.

I wrote a full analysis of the polls and calculated a seat projection for The Globe and Mail. Please take a look at it, as the analysis goes into far more detail than I will here.

Since I didn't go into the regional breakdown in my Globe article, here is how the current aggregation was translated into seats using the 338-seat electoral map. 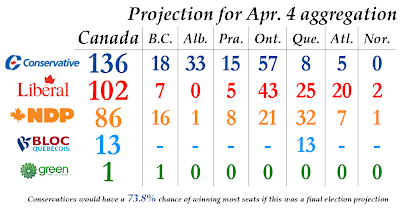 The Liberals have moved ahead primarily on the back of the Forum poll that was released yesterday evening. It gave the Liberals 33% support to only 29% for the Tories and 25% for the New Democrats. When Trudeau was included as Liberal leader, the party's support increased to 40% while the Conservatives dropped to 28% and the NDP to 21%.

A flash in the pan? Maybe not - Léger also recently placed the Liberals in a close race with the Conservatives using a different methodology (online rather than Forum's IVR). And even these two polls aren't the first ones to show a transforming political landscape.

Here are the last seven federal polls that have been conducted. They show a great deal of consistency.

These seven polls from five different firms using three different methods of polling (Forum and EKOS use IVR, Nanos uses live callers, Abacus and Léger use an online panel) have all put the Conservatives at between 29% and 32% support. With the exception of the Abacus poll, the New Democrats have also been within a three-point band of 24% to 27% support in these seven polls, while in five of them the Liberals have been in a four-point band of between 29% and 33% support.

When you consider the numbers as a whole, it is hard to argue that the Liberals have not made big gains in the last two months and that the New Democrats and Conservatives have both taken a big hit.

"So what?", you ask. There is a long list of polls showing this or that leader poised to sweep this or that election in the past, only for them to fall apart and lose. Kim Campbell, François Legault, and (barring an unlikely comeback) Christy Clark are three easy examples.

That should provide a good reason to consider these sorts of poll results with caution (though, it must be pointed out, the Liberals are doing well already without mentioning Trudeau and that is harder to dismiss). But just because some leaders in the past failed to deliver on their promise does not mean that every leader will. Though the numbers are drooping lately, Thomas Mulcair did salvage the New Democrats' support in Quebec just as the pre-Mulcair leadership polls said he would, and he remains their best asset in the province. Conversely, after a boost throughout most of 2012 after his leadership victory, Mulcair's NDP is now just about where the pre-convention polls suggested a Mulcair-NDP would be.

In the same way that no one should be readying 24 Sussex for the return of the Trudeaus based on these numbers alone, no one should also assume that they will lead to nowhere. What should be assumed is that things will probably change, that we don't know how they will change, and that at best the numbers are a decent reflection of what Canadians probably think now. "The only poll that matters is on election day" may be correct in terms of determining who forms the next government, but it is completely wrong when it comes to public opinion. As I have said many times before, there is some meaning to public opinion between elections - we don't just get to express our views once every four years.

However, it is hard not to believe that the Liberals are setting themselves up for a disappointment. They did the same with their announcement of having 294,000 members and supporters, only to have some 130,000 register to vote. (As an aside, there is a difference between the two, which many have over-looked or ignored. The NDP did have some 130,000 members for their leadership race, but they didn't have to register to vote in the same way as in this Liberal race and in the end only 60,000 or so did cast a ballot. And if some quick research is correct, the Conservatives had some 250,000 eligible to vote in their leadership race in 2004 but a little less than 100,000 did. The 160,000 or so Liberal members/supporters who did not register to vote are not gone from the party forever, so it is apples-to-oranges to compare the 130,000 registered voters to the NDP's membership list in 2012 or the Conservatives' in 2004.)

Though the numbers are already quite good for the Trudeau-less Liberals (though of course many respondents are assuming Trudeau will win), the numbers the party is putting up with Trudeau in the mix (around 40%) are certainly unrealistic. Jean Chrétien managed those numbers during his tenure, but that was at a time when the New Democrats were lucky to break double-digits (though another five national points that used to be the Bloc's in Quebec is now up for grabs). Measured against those highs, Trudeau is certainly to disappoint. Measured against where the party was on 2 May 2011, he is certainly to do well. In the short term, he just needs to keep the party in the middle of those two extremes. That seems possible, but it will certainly not write the same headlines.
Posted by Éric at 11:37:00 AM