For this week's Friday update, a brief word about the Labrador by-election, how approval ratings relate to re-election chances, and the final update to the Liberal leadership endorsement rankings.

The leadership endorsement rankings weren't much fun this time around, as Justin Trudeau got most of the endorsements that were handed out from Liberal luminaries. By my count, 84 current or formerly elected federal or provincial legislators and senators from the Liberal Party (and its provincial cousins) gave out an endorsement (not including the leadership contestants themselves), and Trudeau got 66 of them (or 79%). Joyce Murray received ten (12%) and Martha Hall Findlay received four (5%).

The endorsement rankings were a lot more interesting to follow during the NDP leadership race, as Thomas Mulcair, Brian Topp, and Peggy Nash battled it out for top spot. In the end, Mulcair was ranked first and he won. Daniel Paillé was also ranked first in the rankings for the BQ's race.

Of course, one hardly needs a sophisticated model to predict the outcome of the Liberal leadership race. Every single indicator points to Trudeau winning, and winning by a large margin. But who will come second? 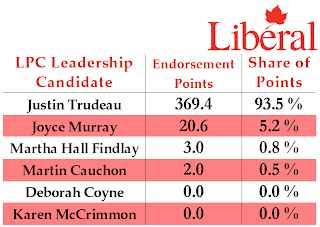 The endorsement rankings - unweighted by region - assume that Murray will finish second. She has more endorsements than Hall Findlay, and the ones she did receive are more highly valued than those that have been awarded to Hall Findlay.

Speaking of which, Hall Findlay is finally on the board. New endorsements added to the model (they may not actually be new, but they are new to the rankings) include those from Kent Hehr, an Alberta Liberal MLA, and former provincial MLAs James Doyle and Aldéa Landry (New Brunswick) and Weslyn Mather (Alberta).

No new ones were added for any of the other contestants.

Murray does have a good chance of finishing second because of all the non-Liberal support she might get from groups like LeadNow and supporters of people like David Suzuki and Bruce Hyer. There is good reason to think that she will finish second, over and above the endorsement rankings. Her fundraising has been better than Hall Findlay's, though it is still far behind Trudeau's.

However, after Marc Garneau dropped out Hall Findlay became the most viable non-Trudeau (and anti-cooperation) option on the ballot. She may be able to get more support than Murray because of that, particularly since Murray's non-Liberal supporters may not bother voting in what is considered a race that will be an easy win for Trudeau. The weighted endorsement rankings (weighting the endorsements by province, similarly to how the votes will be weighted by riding) put Hall Findlay in second. 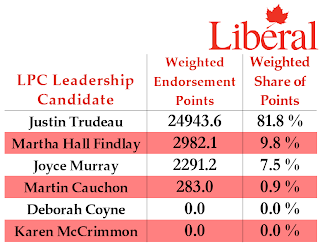 That may prove to be a happy accident as the results will almost certainly be much closer to the mark than the unweighted results. I call it an accident as Hall Findlay is the only leadership contestant that has been endorsed by any Albertan Liberal (at least as far as I can find). That means Hall Findlay is awarded 100% of the points in Alberta, and that propels her from under 1% of the weighted endorsements points to just under 10%. Murray remains at about 8%, while Trudeau is reduced to 82%. That seems like a slightly more plausible result.

But this will almost certainly be a case where the endorsement rankings do not end up very close to the official tally. Obviously, Deborah Coyne and Karen McCrimmon won't be completely shut-out, and Martin Cauchon will probably get more than 1% of the vote. The race was simply too lop-sided, and few with any skin in the game wanted to go up against the Trudeau juggernaut.

If I had to guess, I would give Coyne and McCrimmon about 2% of the vote each, and Cauchon another 5% (he could potentially get more, as he has also had good fundraising). I'd give another 15% apiece to both Murray and Hall Findlay (I won't guess who finishes second, as I have no clue) and that leaves about 60% of the vote to Trudeau. I think that is a reasonable guess - Stephen Harper took 69% in his leadership win (56% of weighted ballots), and I'm not sure if he dominated that race as much as Trudeau has.

Sunday update: In the end, the weighted rankings turned out to be quite close to the final result. Actual point share for each candidate was 80.1% for Trudeau, 10.2% for Murray, 5.7% for Hall Findlay, 2.6% for Cauchon, and 0.7% apiece for Coyne and McCrimmon. Quite close.

One note on turnout. As of writing, turnout among registered voters is 66.7%, or 84,803 of 127,173 registered voters. That easily beats the NDP's turnout of just under 50% in their leadership race. Or does it? While the NDP did have some 130,000 eligible voters, many of them were provincial NDP members or lapsed members who had no interest in voting for the federal leadership in the first place. If the NDP had required registration, how many would have been eligible? It almost makes the 294,000 Liberal members and supporters more comparable, meaning the turnout is under 30%. But then again, many of those supporters might have been even less interested than the provincial and lapsed NDP members from 2012. It makes it an apples to oranges comparison, in the end, at least for turnout.

The Liberals also have a shot at beating the number of voters in the 2004 Conservative leadership race, as they are only about 13,000 short of doing so. They are about 21,000 short of beating the PQ's number in 2005, though, and that might be tougher to top. And they'll need almost perfect turnout to beat the Canadian Alliance's vote total in 2000 (some 120,000).

It will be interesting to parse through the results once they are released on Sunday. Here's to hoping that the Liberals are generous with the data. (Also, if I have missed any endorsements please leave them in the comments (with a link, preferably) and I will add them to the rankings throughout the weekend.)

The by-election forecast for Labrador has been updated, and it remains a Strong Liberal riding. The two new polls added to the forecast, by Nanos and Abacus, have somewhat stronger Conservative results for Atlantic Canada, but that probably has nothing to do with the race there. Labrador is a hyper-local by-election, and the results could be surprising. Will voters punish Penashue or vote to have a cabinet minister as their MP?

The Liberals are also favoured in New Brunswick's Kent by-election, which will be held on Monday. But there has been no new polling data for the province since the last Corporate Research Associates poll.

My article in The Globe and Mail today compares approval ratings to re-election chances, and finds that approval ratings have been a decent predictor over the last few years. The last approval ratings reported in an Angus-Reid quarterly report before an election was within two points of the result for that premier's party in the 2011 Newfoundland and Labrador, 2011 Saskatchewan, and 2012 Quebec elections, and wasn't too far off in Manitoba, Alberta, and Ontario (considering they were conducted a month or more before).

Schedule during the B.C. election campaign

The campaign in British Columbia effectively starts this weekend. My workload will be greatly increasing during the campaign (I'm like a seasonal worker, really), so new posts to the site may often be limited to projection updates for the B.C. election. I will try to keep up with updating the by-election forecasts and the aggregations of federal, Ontario, and Quebec polls, but I apologize if anything falls through the cracks. And let's hope Darrell Dexter waits until after May 14 to launch that province's campaign.
Posted by Éric at 4:16:00 PM