Ford! Now that I have your attention...

...how about we take a look at Rob Ford's polling numbers?

Did Rob Ford's approval ratings actually go up after Toronto Police Chief Bill Blair confirmed the existence of a video seeming to show the Toronto mayor smoking crack cocaine (which he admitted to yesterday)? The answer is: probably not. I took a look at this, among other things, in my article today for The Globe and Mail (available to subscribers only, please consider a subscription if you can), but considering that the notion that Ford's approval ratings increased after Blair's press conference last week has been cited all over the place - including CNN and on The Daily Show with Jon Stewart last night - I wanted to address this here in more detail.

First of all, the polls in question come from Forum Research and I have already gone over some of the potential sampling issues with their methodology before. But secondly, their numbers need to be placed in a lot more context. Ford's approval ratings did go up, but only after they plummeted. After polling between 44% and 49% over the summer, he managed 39% in a late October poll. So when his numbers moved back to the 43% to 44% range over Forum's last two polls, the moral of the story seemed to be that crack cocaine is good for your re-election chances. But is that really accurate? 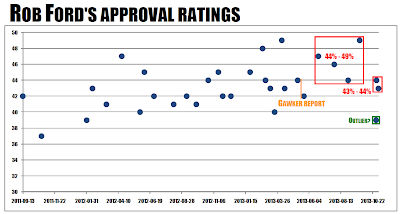 The chart above shows the evolution of Rob Ford's approval ratings in Forum Research's polling since mid-2011 (to give it better focus, I cut off the y-axis at 30%). As you can see, they had generally been trending slightly upwards but for the most part have been between 41% and 47% throughout his tenure. That is rather stable.

I have highlighted the four polls done over the summer, conducted after the initial aftermath of the first Gawker report on the existence of the video, and before the odd 39% poll that Forum released at the end of October. If we compare that group of polls to the more recent one, we see that Ford's approval rating is more likely to have decreased due to Blair's report than increased. That 39% poll looks a lot like an outlier. It was the worst poll Forum had put out for Ford since February 2012, and of 32 polls conducted since September 2011 it was in the bottom three.

Ford made it clear that (for now, at least, things seem to be changing from hour to hour) he will be running again in October 2014. His chances of re-elections are, perhaps, not very good. But they are also a lot better than they probably should be, considering the events of the last few days.

Forum has been conducting hypothetical mayoral polling for some time now, with unusual names sometimes thrown into the mix. But the field is starting to get a little clearer: Karen Stintz, a city councilor, and David Soknacki, a former city councilor, have both announced their intentions to run. Olivia Chow, a downtown NDP MP, is also considered likely to run. How would Ford do against these candidates? 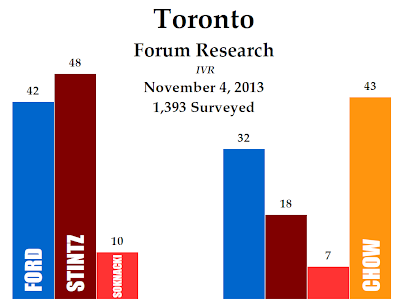 Note that this poll was done before yesterday's circus, and that I have removed the undecideds (numbered at 21% in the poll on the left, 10% on the right) myself.

Against Karen Stintz, Rob Ford comes up short with just 42% support against 48% for Stintz among decided voters. Soknacki takes 10% of the vote. That is still relatively close, though, and certainly close enough that Ford couldn't be ruled out in a campaign one year from now.

And he still has a bit of a regional base. He wins North York with 48% of the vote against Stintz, as well as Scarborough with 54%. Stintz takes Etobicoke with 48%, while she dominates the old city of Toronto with 62% of the vote.

Once Olivia Chow is included, however, Stintz falls away significantly. This suggests that Stintz's support in the first poll is more about not being Rob Ford than it is about being Karen Stintz. Chow wins by a much wider margin with 43% of the decided vote, against 32% for Ford, 18% for Stintz, and 7% for Soknacki. Chow wins every region of the city, with 48% support in old Toronto, 44% in North York, 41% in Scarborough, and 38% in Etobicoke (where Ford comes closest to winning).

In the first poll, Stintz manages to drag 21% of Ford's 2010 vote towards her. In the second poll, Chow captures 20% of Ford's vote, while Stintz takes another 10%.

The Toronto mayor still has a potent base and it makes him potentially competitive in the next campaign (if he holds on until then, and his vote does not tank after yesterday's admission), but it might have shrunk to a size that does not make him capable of winning. In the end, though, we need to wait and see how things shake out before coming to any initial conclusions about his electoral chances a year from now. The current landscape is just changing too much. But reports of Ford's resilience may be exaggerated.
Posted by Éric at 9:53:00 AM