October was a rather tumultuous month here in Ottawa, and the volume of polling reflects that. In all, 14 national and regional polls were conducted and released during the month of October, surveying a total of 17,581 Canadians. That is the largest amount of public federal polling done in any month since March 2012, when Thomas Mulcair was named the leader of the New Democrats. It was a different recently named leader, however, who had the best numbers this month. 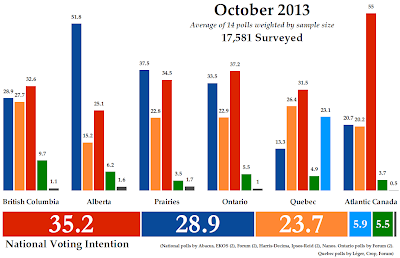 The Liberals led for the seventh consecutive month, with an average of 35.2% support. That was a 2.9-point gain over September's averages. Though the Liberals' lead has wobbled back and forth over the last seven months, the wobble itself has been relatively consistent. This period of polling strength is easily the longest the Liberals have enjoyed since Paul Martin's leadership.

The Conservatives were down 1.5 points to 28.9% support in October. The party has not been at or below 30% since at least before 2009, when the monthly averages begin, let alone for seven consecutive months. The current polling numbers for both the Tories and the Liberals put us back to pre-2006 levels. More than seven years ago!

If we compare these nine national polls to the last time the same firms were in the field, we get a good comparison of how things have moved since the summer.

When we compare apples to apples like this, we see that the Conservatives have dropped a point since the summer, the NDP has been relatively stable, and the Liberals have picked up almost three points.

Quebec enjoyed its first month of stability in the polls since before Justin Trudeau became Liberal leader. The Liberals were down 0.7 points to 31.5%, while the New Democrats were down 0.3 points to 26.4%. The Bloc Québécois slipped 0.7 points to 23.1%, while the Conservatives were up 0.8 points to 13.3% in the province. The party has been at 13% in Quebec for the last four months now. The Greens were up 1.1 points to 4.9%.

And in the Prairies, the Conservatives managed their worst result since May with just 37.5% support, down 4.3 points from September. The Liberals, who have been moving up and down over the last few months but generally trending upwards, recorded their best result since at least January 2009 with a gain of six points to 34.5% support. The NDP was down 1.6 points to 22.8%, while the Greens were down 1.4 points to 3.5%. 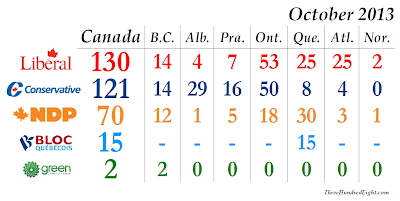 With these levels of support, the Liberals would win a plurality of seats with 130, a gain of 15 over September's projection. The Conservatives dropped 15 to 121, while the NDP, Bloc, and Greens were unchanged at 70, 15, and two seats, respectively.

Approval ratings over the month (just two polls by Forum and EKOS) averaged 29% for Stephen Harper, 45% for Mulcair, and 49% for Trudeau. That was generally unchanged for both the Conservative and Liberal leaders from September, but Mulcair's was up a fair bit.

So it would seem that the month was a rough one for Harper and the Conservatives, which you probably didn't need polling data to figure out. So far, the Liberals have made the gains though it is possible that we will see Mulcair's Question Period performance begin to pay off. The Conservatives dropped everywhere in Canada except Quebec, where their gains were modest and the electoral consequences minimal. The Liberals gained in everywhere except in Quebec, which does have implications for their chances of winning a strong minority or majority government. For the New Democrats, it was general stagnation. In the context of the party, 24% is terrific as it would still be the second-best result for the NDP in its history, but after 2011 expectations are considerably higher.

Nevertheless, October was also a noisy month when you take into account all of the events on Parliament Hill - particularly in the last two weeks. It may be more instructive to see where the numbers lie in November and December when things have some time to settle down.
Posted by Éric at 10:50:00 AM