When Ontarians are next called to the polls, which could occur as early as the spring, the election could be one of the closest three-way races in recent memory anywhere in Canada. At least, that is how Ipsos-Reid measures the situation in the province. 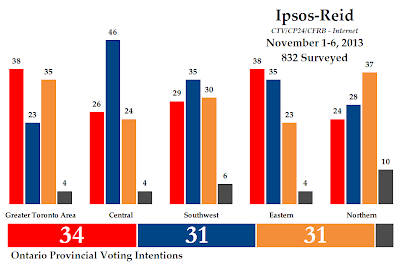 Ipsos-Reid was last in the field provincially in Ontario in mid-May. Since then, the Liberals have held steady with 34% support, while the Progressive Conservatives have slipped three points to 31% and the New Democrats have increased by five points, also to 31%.

The shift in support is within the margin of error (of a probabilistic sample, at least) for the Tories, but outside the margin of error for the New Democrats. It is worth noting, however, that the PCs have dropped over two consecutive polls from Ipsos.

Support for other parties was 5%, which we can assume is mostly Green support. Roughly 25% of the entire sample was undecided.

For the most committed voters, however, the situation is very different. Among those who say that only an emergency would prevent them from voting, the Progressive Conservatives led with 38% support, against 31% for the Liberals and 27% for the New Democrats. That is a remarkably different set of numbers, as you will see in the seat projection below.

Regionally, the Liberals led in the GTA with 38% support and in eastern Ontario, also with 38% support. It is difficult to compare the regional numbers to Ipsos's last poll, as based on the sample sizes it would appear that their definitions have changed. The Liberals placed second in central Ontario with 26% and third in the southwestern and northern parts of the province, with 29% and 24%, respectively.

The Tories led in central Ontario with 46% and in southwestern Ontario with 35%, placing second in eastern and northern Ontario with 35% and 28%, respectively, and third in the GTA with just 23% support. That is an odd number, and suggests that for this poll Ipsos is considering the GTA to be much smaller than most other surveys. If it isn't, that is disastrous for the Tories.

The New Democrats led in northern Ontario with 37%, and trailed in second with 30% in southwestern Ontario and 35% in the GTA. They were third in the central and eastern part of the provinces with 24% and 23% support.

With these levels of support, the Liberals would likely win a reduced minority government of 43 seats, with the PCs taking 34 seats and the NDP winning 30.

But if we look at the committed voter tally from Ipsos-Reid, the seat count changes dramatically: 52 seats for the PCs, 28 for the Liberals, and 27 for the New Democrats. That is close enough to the majority threshold for the Tories that it would not take much of an error in the model, or a good distribution of votes, to turn that into a majority government. Likewise for what it would take to change the identity of the Official Opposition.

It is difficult to determine who holds the real advantage in these numbers. Among the entire population, Kathleen Wynne is seen as the best person to be premier by 33%, followed by Andrea Horwath at 29% and Tim Hudak at 28%. That is a similar breakdown to the vote intention numbers, but among committed voters Hudak leads with 36% to 31% apiece for Horwath and Wynne. This suggests that, among those most likely to turnout, Hudak does not have a leadership problem but Wynne potentially does. Whereas her party placed four points ahead of the NDP among likely voters, on leadership she tied Horwath.

And then there are the numbers on the second-choice question. Hudak appears to be safe as his supporters see few options in the other parties: 38% of Tories said they did not know what their second choice would be, and 25% said "other" (code for none-of-the-above). Just 21% selected the NDP as their second choice, and 17% the Liberals. So if Hudak does leak support, no one party will benefit in particular.

Horwath appears similarly secure, with 55% of NDP supporters saying they did not know which party would be their second choice or responding with 'another party'. Not surprisingly, New Democrats were more likely to select the Liberals (27%) than the Tories (18%) as their second choice, but that is still a small pool.

The Liberals are in much more danger of leaking votes. Fully half of their supporters said the NDP was their second choice, and 21% selected the Tories. Just 29% responded with 'don't know' or 'another party'.

All of this points to a lot of uncertainty. Luckily, this isn't the final poll before an election. If it were so, any scenario could be plausibly envisioned from these numbers. The overall result points to an OLP minority, but the re-election numbers suggest even a majority is possible. The committed tally makes a PC government likely, with the result being either a minority or majority government. And the NDP has strong leadership numbers and a base that is less likely to leak to the other parties - in fact, they stand a good chance of attracting Liberals at the ballot box. Anyone can see what they want to see in these numbers.

That is a nightmare for forecasters. But it would set up for an interesting election night.
Posted by Éric at 10:35:00 AM