On Friday, The Globe and Mail published the latest by-election polling results from Forum Research, showing no significant change in any of the four races. In fact, that has been the only real consistent trend in the by-election polling: remarkable stability. 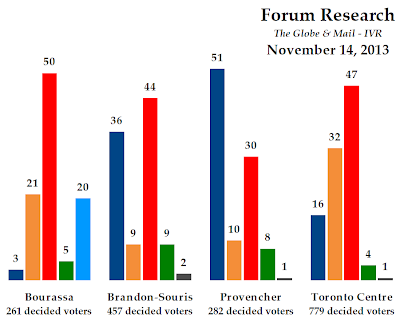 Forum was last in the field for these by-elections on Nov. 5, and showed no statistically significant shifts of support for any of the main contenders in any of the four races.

In Bourassa, Emmanuel Dubourg of the Liberals led with 50% support, with Stéphane Moraille of the NDP at 21% and Daniel Duranleau of the Bloc Québécois at 20%. Dubourg led in all well-polled demographics.

Rolf Dinsdale of the Liberals continued to lead in Brandon-Souris, with 44% support to 36% for the Tories' Larry Maguire. NDP candidate Cory Szczepanski and Green candidate David Neufeld were tied at 9% apiece. The demographic breakdowns were the opposite of what you'd expect, with Maguire more competitive among younger voters and women and Dinsdale leading very comfortably among voters over the age of 55. When it comes to turnout, though, that is a big advantage for the Liberal candidate.

In Provencher, Ted Falk of the Conservatives led with 51% and among all well-polled demographics. Terry Hayward of the Liberals was at 30%, followed by Natalie Courcelles-Beaudry of the NDP at 10%.

And in Toronto Centre, the Liberals' Chrystia Freeland led with 47% support, with leads among both men and women and voters over the age of 35 (though she trailed by a point among younger voters). Linda McQuaig of the NDP was at 32%, followed by Geoff Pollock of the Conservatives with 16%. The problems that Abacus Data highlighted with the last Forum poll do not seem to be an issue here, due to Freeland's comfortable lead among almost all age groups.

What is remarkable about these polls, considering the snapshot nature of Forum's IVR polling and small sample sizes (with the exception of Toronto Centre), is the stability of the polls. In virtually all cases, support is wobbling to and fro within the margin of error. The only large shift recorded has been between the Oct. 17-18 and Nov. 14 polls in Bourassa for the Greens. The drop in support after Georges Laraque dropped out of the race was outside the margin of error. In every other case, shifts in support for the major parties between Oct. 17-18 and Nov. 14 and between Nov. 5 and Nov. 14 were within the margin of error. 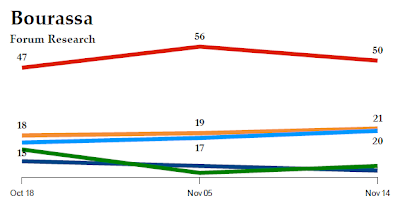 In Bourassa, Dubourg has been up-and-down and the trendlines for both Moraille and Duranleau are positive. But they are not significant - and they certainly don't point to any potential for an upset or surprise.

The trendline in Brandon-Souris is positive for Dinsdale, but a gain of 39% to 44% is not large considering the sample of decided voters was under 460 in the first and most recent polls of the campaign. Dinsdale appears to be taking support from both the Greens and NDP, who have been trending downwards. But again, these are not significant trends. 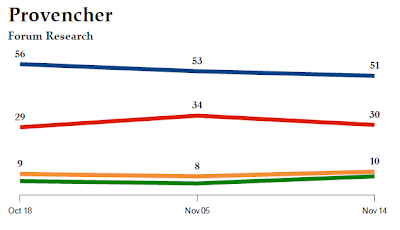 The trend for Falk in Provencher is negative, but not that significant with samples of decided voters of 310 or less in the three polls. Both Hayward and Courcelles-Beaudry have been up-and-down. 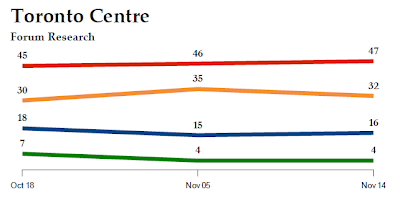 And in Toronto Centre, the only trend is a slightly positive one for Freeland, with McQuaig generally holding steady (in this race, as in Bourassa, looking at the polls done months ago before any candidates were named does not instruct us much in determining a strong trend in the campaign itself). The margin between the two has oscillated between 15 points, 11 points, and 15 points again.

These four charts show just how stable the numbers have been. Compare that to, say, Calgary Centre (where the Conservatives dropped by more than 10 points during the campaign) or Labrador (where the Liberals dropped by almost 20), and you see that this degree of stability is not something that occurs every time. Are the races not registering in voters' minds? Is Forum missing out on important new trends? We can expect Forum to report again before the votes on Nov. 25. Perhaps the last 11 days of campaigning will shake things up. But if things stay as steady as they have been over the last month, the Liberals are heading for a good night.
Posted by Éric at 10:09:00 AM