With all the brouhaha in Toronto and the Senate, perhaps we need to be reminded that an election is actually on-going in the four federal ridings heading to the polls on Nov. 25. And yesterday evening, Forum Research came out with their latest set of numbers for those four by-elections, showing the Liberals leading in three of them and making (mostly modest) gains across the board. 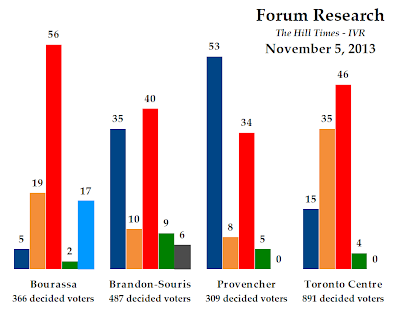 Forum was last in the field for these by-elections on Oct. 17-18, just before the elections were officially called.

The Liberals made their biggest gain in Bourassa, where Emmanuel Dubourg picked up nine points to reach 56% support. That jump was outside the margin of error, and apparently came almost entirely from the Greens. With Georges Laraque off the ballot and Danny Polifroni in his place, support for the Greens fell 10 points to just 2%. I suppose that demonstrates just how much Laraque was worth, as his party was polling at 3% in the riding earlier this year before he threw his hat (temporarily) in the ring. It has to be disappointing for the Greens, who have put a lot of resources into the riding.

Support for the NDP's Stéphane Moraille increased by a single point to 19%, while Daniel Duranleau of the Bloc Québécois was up two points to 17%. That also has to be disappointing for the New Democrats, who had hoped to be able to wrest the riding away from the Liberals, or at least keep it competitive. Instead, Dubourg led by a wide margin among most demographics and the party has actually been increasing its support over the last two polls.

The Liberals also led in Brandon-Souris, up a single point to 40%. The Tories' Larry Maguire was unchanged at 35%, while Cory Sczepanski was down two points to 10%. Forum did increase its sample size in this riding from last time, and still found a very similar result to the mid-October poll. Rolf Dinsdale led among most demographics as well, suggesting his support is wide as well as deep.

In Provencher, Ted Falk of the Conservatives dropped three points to 53% but continued to hold a lead over Terry Hayward of the Liberals, who was up five points to 34%. Falk enjoys a good lead among all demographics. Natalie Courcelles-Beaudry of the NDP was down a single point to 8% in the riding.

And in Toronto Centre, the Liberals' Chrystia Freeland was steady with a gain of a point to 46%. Linda McQuaig picked up five points - outside the margin of error - to close the gap with 35% support. Geoff Pollack of the Conservatives was down three points to 15%. Significantly, Freeland had a big lead among older residents of the riding (i.e. voters), while McQuaig did best among those with a household income of $40,000/year or less (not exactly middle class). But McQuaig is steadily making gains, as the candidate-less party had 20% support earlier in the year. That increased to 30% in October, and is now at 35%. The Conservatives seem to have been dropping as a result (indirect or not).

Unfortunately, Forum did not release a breakdown by past federal vote, so it is impossible to check the weightings as I did in my last report on Forum's by-election polling.

Below are the weighted averages of the polls in these ridings. Forum's are the only ones in the game, and the 67% rule has been applied to the weightings to ensure that no single poll takes up the entire calculation. As previously explained, the 67% and 95% confidence intervals take into account the past degree of accuracy of by-election polls.

Dubourg is considered virtually unbeatable in Bourassa according to Forum's polls, as he still wins handily even at the lower end of the 95% confidence interval.

Brandon-Souris remains a toss-up leaning Liberal, as both confidence intervals put Maguire and Dinsdale in a position to come out on top.

Falk should have no problem holding the riding, but at the 95% confidence interval Hayward is getting perilously close to being in range of a surprise upset.

Freeland's lead remains wide enough that she should be able to win, but McQuaig is close enough as well that she is more than in the running to take it on Nov. 25.

It will be interesting to see where the numbers go from here, as minds focus a little more as voting day approaches. In the end, these were all relatively comfortable ridings for the incumbents so it should come as little surprise that the Liberals are favoured in two of them and the Conservatives in Provencher. But Brandon-Souris is definitely the race to watch - and Toronto Centre is still potentially up for grabs.
Posted by Éric at 10:29:00 AM