Voters in the ridings of Bourassa, Brandon-Souris, Provencher, and Toronto Centre head to the polls today as a nation eagerly does other things. But we politicos will be watching with baited breath, as all four by-elections have their own interesting stories to tell.

ThreeHundredEight's forecasts are for the Liberals to hold Bourassa and Toronto Centre, for the Conservatives to hold Provencher, and for Brandon-Souris to be a toss-up between the two parties. But the polls that have been conducted throughout the campaign from Forum Research have a different perspective: an easy win for the Liberals in Brandon-Souris and a relatively closer race in the other three.

Let's take a look at the polls before we get into the forecasts. Forum conducted polls in the four ridings on Nov. 22, and did a final poll in Brandon-Souris and Toronto Centre yesterday.

I've been impressed by the level of scrutiny these polls have been receiving in some quarters. For example, take a look at the article in the Winnipeg Free Press today. It discusses several cases of people reporting being polled by Forum five or six times, which raises the question of just how random their sampling is (though, with response rates being what they are, and the riding being as small as it is, almost every household in Brandon-Souris would have to be called to get a viable sample each and every time, and if this includes call-backs then that is not a problem).

I've also seen multiple tweets about sampling issues, particularly in terms of reported last vote and the breakdown by age. I've been banging on about these issues before, and they have continued in Forum's polling during these campaigns, so it is gratifying to see that others are noticing as well. This is the sort of scrutiny that should always be happening with polls, and at least these by-elections give us the opportunity to put the firm to the test. 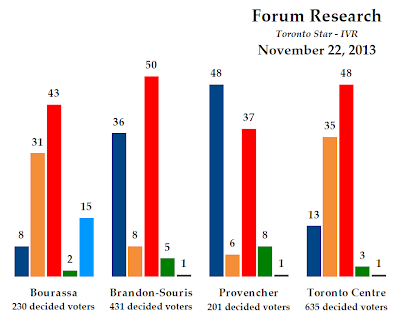 First, the polling that was done on Nov. 22.

In Bourassa, Emmanuel Dubourg dropped seven points from the previous set of polling done on Nov. 14, putting him at 43%. Stéphane Moraille of the NDP picked up 10 points to move into a tighter race with 31%, while Daniel Duranleau fell five points to 15%. Dubourg led among voters between the ages of 35 and 64 and among women, while Moraille was ahead among the youngest and oldest voters and among men. It makes for a somewhat muddy picture of the contest.

Rolf Dinsdale continued to make gains in Brandon-Souris, up six points to 50%. He led among voters 35 and older and among both men and women. Larry Maguire was unchanged at 36%, while Cory Szczepanski dropped a point to 8%.

In Provencher, Ted Falk led among all demographics and dropped three points to 48%. Terry Hayward was up seven points to 37%, while Janine Gibson of the Greens was steady at 8% support.

And in Toronto Centre, Chrystia Freeland led among all demographics and increased her support by one point to 48%. Linda McQuaig was up three points to 35% and Geoff Pollock was down three points to 13%. 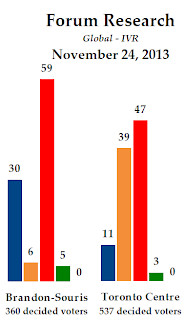 Now to the polling done yesterday, and published late last night by Global. The poll showed a big gain for Dinsdale, as his support increased to 59%, with Maguire dropping to just 30% and Szczepanski to 6%. Forum really doubled-down in this riding - it is hard to imagine that a Liberal will win almost 60% of the vote in a rural Prairie seat.

In Toronto Centre, Freeland dropped back to 47% but McQuaig picked up four points to reach 39% and close in on the Liberal candidate. Pollock dropped another two points to 11%.

The problems with past vote

The reported past vote in most of the polls, however, is at odds with the actual results from 2011. There are plausible reasons for this: Ontario and Manitoba had provincial elections in October 2011, after the May 2011 federal election, and Quebec voted in September 2012. That can play tricks on a voter's memory. And in the two years and more that has passed since the federal election, some people will have moved. While keeping this in mind, let's look at the reported past voting numbers for each of these polls.

In Bourassa, the reported past vote was 47% Liberal, 20% NDP, and 19% for the Bloc Québécois, instead of the actual 41%, 32%, and 16% that occurred in the last election. That is not bad for the Liberals and Bloc, but that is a considerable under-polling of the NDP vote. If we weigh according to the 2011 election results, we see the race get significantly closer: 43% for Dubourg and 36% for Moraille.

The story is similar in Provencher, with reported past vote being 59% for the Conservatives, 14% for the Liberals, and 12% for the NDP instead of the actual 71%, 7%, and 18% result. Re-weighted, the results still heavily favour Falk: 54% to 35% for Hayward.

Re-weighted for past vote, the 13-point gap in the Nov. 22 poll shrinks to a single point: 40% for Freeland and 39% for McQuaig. The eight-point gap on Nov. 24 is flipped to a five-point lead for the New Democrats: 43% for McQuaig vs. 38% for Freeland. This is something to keep in mind as we watch the results come in tonight.

But for the reasons stated above, weighing by past vote is no panacea and can actually make a poll worse. Nevertheless, because of the sampling issues with these polls in general we should be prepared for unexpected results.

Based on the polls by Forum Research, Bourassa should actually be one of the easier races to call tonight. And the forecast does consider the riding a STRONG LIBERAL one.

But polling in Quebec suggests that Dubourg should be able to win the riding by a far larger margin than the riding-specific polls suggest. This indicates one of two things: that the race is intensely local and that Moraille has made an impact, or that the polls are under-estimating Dubourg's ability to pull off the win by a large margin. I suspect that the race will be much closer than the rolling 30-day average estimates. 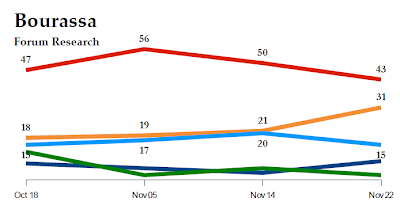 The polling in the riding is looking positive for Moraille, in that she seems to have closed the gap considerably. Dubourg has dropped from 56% on Nov. 5 to 43% on Nov. 22. A linear extrapolation of the trends does not give Moraille the win by today, but there is every opportunity for the race to get much closer than the 12-point gap recorded on Friday. 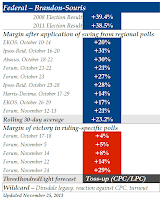 Everybody will be closely watching the results in Brandon-Souris, the race that Forum pegs as the least in doubt but the one that is raising the most eyebrows. The forecast is accordingly mixed, with the riding considered a TOSS-UP (CPC/LPC), giving the Conservatives and Liberals virtually even odds of taking it.

This has been the most intensely local contest of the four, as the riding should under no normal circumstances be anything but a Conservative lock. Applying the regional Prairie polls to the riding gives the Conservatives a win by 20 points or more - usually over the NDP - rather than the double-digit deficit that Forum has pegged the Tories to have against Dinsdale. This is the main reason why the forecast is mixed: the fundamentals point to an easy Maguire win, but the polls point to an easy Dinsdale win. Of course, we've been misled by the polls before (*cough* Ottawa South *cough*). 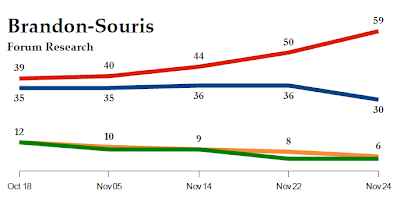 The trendline has been particularly favourable to Dinsdale throughout the race, as he has picked up support in every poll done by Forum. Maguire was holding steady, but his vote tanked in the last survey. It is very hard, though, to get my head around this. I can imagine a close race based largely on local factors. I have trouble imagining the Liberals doubling the Conservative vote. 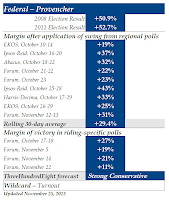 Instead, that title should go to Provencher, the other riding up for grabs in Manitoba. It is one of the safest Conservative ridings in the country, and though Forum suggests the race is closer than it should be, it is nevertheless a STRONG CONSERVATIVE forecast.

Regional polling - in which the Conservatives have indeed taken a hit - is generally in line with the polling by Forum. The 30-day rolling average of the regional polls gives Falk the win by about 29 points, whereas Forum suggests it should be between 10 and 20 points. But even if the Conservatives win it by 20 points or less, that would be a remarkable hit against the party: Vic Toews won it by 53 points in 2011. 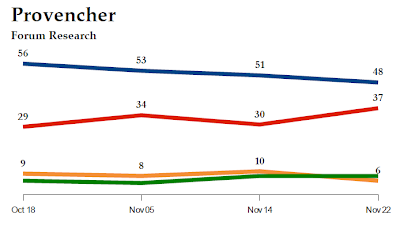 If the trendlines mean anything, the election is coming at the right time for Falk. He has lost support in every poll, though Hayward's has been less consistently heading in any direction. But if the race lasted for another few weeks, Hayward might have moved ahead!

Though we have to believe that Forum is under-estimating Conservative support, past error in by-election polling does make Provencher a riding that could theoretically go either way. At the 67% confidence interval, Falk wins comfortably with between 42% and 54% of the vote to Hayward's 31% to 43%, but at the 95% confidence interval Falk's support stands at between 38% to 58% to Hayward's 27% to 47%. There is a lot of overlap there, but the fundamentals of the riding are so heavily skewed in Falk's favour that it is difficult to believe that Hayward is really in the running to take Provencher.

While Brandon-Souris might be the most interesting race of the four, Toronto Centre is the one that is being most hotly contested. There are a lot of national narratives at play in this riding, and both Thomas Mulcair and Justin Trudeau have invested a lot of political capital in their candidates. But both the provincial and riding polls suggest Freeland should win, making this a LIKELY LIBERAL hold.

The New Democrats do have a hope, though, with an estimated 15% chance of winning. But the regional polls have not been kind to the New Democrats, as the Liberals have secured first place in Ontario. Based on them alone, the Liberals would win by some 27 points. But the riding polls have shown a much closer race, and one that has been getting closer in the closing days of the campaign. 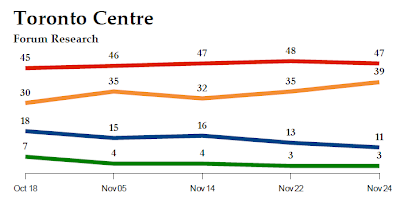 Freeland's support has been flat, however, never wavering from between 45% and 48% support. McQuaig's has been less steady, but the trendline between Nov. 14 and Nov. 24 is certainly in her favour. Perhaps not enough to overcome the eight-point gap, but certainly enough to make it interesting. Pollock's vote has been drifting away as the race focuses on the two former journalists.

Do these four federal by-elections have national implications? To a certain degree, they do. As Paul Wells wrote last night, "by-elections are not terribly significant, but they're not quite meaningless". I'd say the by-elections in Bourassa and Toronto Centre are less rife with meaning, especially if the Liberals retain them. Brandon-Souris has been intensely local, but there are important reasons why it was even capable of being anything but a Conservative walk. If the Tories do lose so much of their vote in both Provencher and Brandon-Souris, that will not be meaningless. Despite what governments say, they usually don't lose by-elections. These results will be mostly forgotten by Christmas, but they are still an excellent opportunity to get a spot-check on the sentiment of (some) Canadians. To the polls!
Posted by Éric at 10:18:00 AM