Federal Liberals up among francophones

A new survey by CROP for La Presse was released yesterday, showing that the Parti Québécois's string of improving poll numbers has been stopped in its tracks and that the provincial scene has settled down. The poll also showed that the federal Liberals have moved into a definitive lead over the New Democrats in Quebec after running neck-and-neck in CROP's polling during September and October. 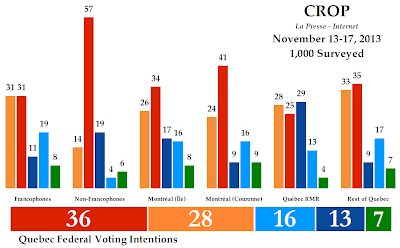 CROP was last in the field Oct. 17-21, and had put the Liberals and NDP in a tie at 31%. But since that poll, the Liberals have jumped five points to 36% in the province, against a drop of three points for the NDP to 28%. The Bloc Québécois was down two points to 16% while the Conservatives were down a point to 13%. The Greens were up a point to 7%.

Of the entire sample, 10% were undecided and another 7% did not respond to this particular question.

While the movement of the other parties would be within the margin of error of a probabilistic poll, the gain of the Liberals would be statistically significant. It puts them closer to where they were during the April to August period, while the New Democrats have been stuck between 27% and 33% in CROP's polling for the last seven months.

The Liberals' gain seems to have occurred primarily due to an increase in support from francophones. With a significant gain of six points, the Liberals tied the NDP at 31% among this demographic. That put the two parties well ahead of the Bloc at 19% and the Conservatives at 11%. The Liberals had 57% support among non-francophones, followed by the Conservatives at 19% and the NDP at 14%.

Regionally, the strongest Liberal lead was in the suburbs around Montreal, where the party had 41% support against 24% for the NDP and 16% for the Bloc. On the island itself, the margin was narrower with the Liberals at 34%, the NDP at 26%, and the Conservatives at 17%.

The Liberals and New Democrats were almost tied in the regions of Quebec, with 35% support for the Liberals and 33% for the NDP. The Bloc was third in this part of the province with 17%.

The closest race of all is in Quebec City, however, where the Conservatives were narrowly in front with 29% support. The NDP was up to 28% while the Liberals had fallen to 25% in the provincial capital.

On who would make the best prime minister, Justin Trudeau was unchanged at 26%, while Thomas Mulcair and Stephen Harper each dropped a point to 24% and 10%, respectively. These numbers generally line-up with the voting intentions numbers before removing the undecideds.

Provincially, the race is far closer. Though the PQ has opted not to call an election this fall, the province is still on a pre-election footing as most believe that the Liberals and Coalition Avenir Québec will team up to defeat the government on the next budget, or the PQ will engineer its own defeat over a vote on the charter. In either case, the election is likely to occur in the spring. 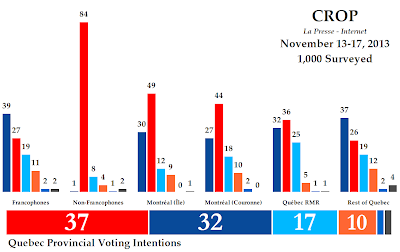 CROP suggests that things have been holding steady, with no significant shifts in support since their Oct. 17-21 poll.

Of the entire sample, 11% was undecided and another 6% did not answer the voting intentions question. That is virtually unchanged from October.

Satisfaction with the PQ government dropped three points to 32%, its lowest level since June. Similarly, the PQ dropped for the first time in CROP's polling after four consecutive recorded increases, from 24% to 34%, over the last few months. Their 'momentum' seems to have hit its ceiling.

The PQ led among francophones with 39%, followed by the Liberals at 27% and the CAQ at 19%. Among non-francophones, the Liberals had 84% support to 8% for the CAQ and 4% for Québec Solidaire.

With CROP's regional numbers, the Liberals would likely win 60 seats, with 57 going to the Parti Québécois, seven to the CAQ, and just one to Québec Solidaire (at 9% on the island of Montreal, the party is down three points while the PQ is up six over the 2012 election).

The Liberals win more than half of their seats in the Montreal area, but also win the majority of seats in Quebec City and put up strong numbers in the regions. The PQ wins almost two-thirds of their seats in the regions, but are competitive in the suburbs and win the usual suspects on the island. The CAQ is pushed out of the suburbs to their base in the Quebec City and central Quebec.

A three-seat margin in the projection is virtually meaningless, and the Liberals missing the majority threshold by three seats is also too close to conclude definitively who would be more likely to win, and what form the government would take. I'd reckon a roughly 58% chance that the PLQ would emerge with more seats in this scenario, little better than a coin-flip.

But the steady support for the Liberals masks an increase for Philippe Couillard. On who would make the best premier, Couillard was up four points to 26%. Pauline Marois was down two points to 21%, while François Legault was unchanged at 13%. Interestingly, unlike the federal numbers these leadership numbers suggest that Couillard and Marois are less popular than their own parties to a considerable degree (Couillard scored five points less than his party when undecideds were included, Marois scored six points less). In the spring, Couillard was scoring only two or three points less than his party.

It will be interesting to see how Couillard's numbers will move in the next month. This poll was taken at around the same time as Fatima Houda-Pepin, a Liberal MNA of Morroccan descent, expressed her disagreement with part of her party's position on reasonable accommodations. It doesn't seem to have hurt either the PLQ or Couillard, but the poll was taken before the last few days when Couillard back-pedaled and reversed himself on the charter to some degree. If anything, it has at least taken the focus off the PQ for a week or two.

This could have an effect on Couillard's numbers in several different ways. It could make him seem like a weak leader who has little control over his caucus. It could disappoint those who are firmly against the charter (though they have few other options on the ballot). On the other hand, it could make him look flexible, and it could attract support from francophones who have mixed feelings about the charter but who are not entirely opposed to the concept. Considering all these possibilities, it could also very well balance out. We will have to see where the Liberals sit in polling by Léger and CROP in the coming weeks.
Posted by Éric at 9:27:00 AM