No winning hands for Ford

Ipsos-Reid has jumped into the municipal fray, helpfully providing us with a different look at what Torontonians are thinking about their mayor and who they might want as their next mayor. The results are not good for Rob Ford, as the poll suggests that, no matter who else is on the ballot, he will lose.

The poll also shows that Ford has a high degree of notoriety, as well as now being notorious. This should come as no surprise, considering he has been plastered across the front pages and the news bulletins, and he has been mayor since 2010. But the Ipsos-Reid poll took a look at just how familiar Torontonians are with some other potential and declared candidates for next year's mayoral race, and it hints at who the likely frontrunners will be.

Almost everyone surveyed had heard of Rob Ford, with 81% saying they were very familiar with him and 17% saying they were somewhat familiar. Only 1% said they were not really familiar, and another 1% had never heard of him. They probably just moved to Toronto on the day of polling from a country without television/radio/smoke signals.

Olivia Chow, current NDP MP for Trinity-Spadina, had a relatively high degree of name recognition considering her generally modest profile. Almost one-half, or 47%, were very familiar with her and another 36% were somewhat familiar with her. Only 7% had never heard of her. Chow was most well-known in the old city of Toronto, at 89% very/somewhat familiar.

Close behind her was John Tory, former mayoral candidate and former leader of the Ontario PCs. He had a notoriety of 76%, with just 9% never having heard of him. He was most well-known in York/East York, at 81%.

After him was city councillor and declared candidate Karen Stintz, with 29% being very familiar of her and 35% somewhat familiar. She was most well-known in York/East York, at 70%.

Considering that 58% of respondents said they would absolutely vote in the next election, a number that would actually be quite good for a municipal vote, the notoriety of these four potential and declared candidates seems to be good enough. A campaign will undoubtedly close the gaps.

Norm Kelly, current deputy mayor, was very or somewhat familiar to 36% of Torontonians while David Soknacki, former councillor and declared candidate, was familiar to just 16%. Almost half had never heard of him.

How would these candidates do in the various scenarios that could play out in October 2014? 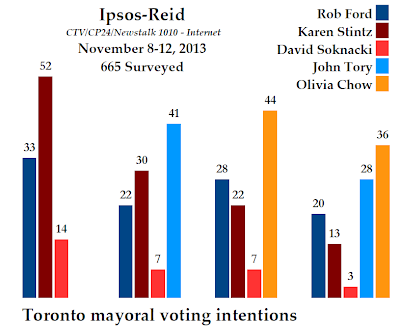 Stintz, Tory, and Chow each have a winning scenario. Ford does not. And Chow seems to be the most strongly positioned, as she wins the two scenarios in which she was included in Ipsos-Reid's polling.

If no other candidate decides to run apart from those who have already declared, Stintz wins handily. She would take 52% of the vote, compared to just 33% for Ford and 14% for Soknacki. Stintz would win every region of Toronto, though the race in Scarborough would be close (43% to 41%). She does best in York/East York with 61%.

If Tory throws his hat into the ring, he comes out on top. He would win every region and take 41% of the vote, with Stintz finishing second at 30% and Ford falling to third with just 22% of the vote. The contest in old Toronto would be close, with Tory edging out Stintz 38% to 36%. Tory would do best in Etobicoke with 45%, while Ford would take 30% of the vote in York/East York and drop to just 16% in Toronto and Etobicoke.

If Tory does not run but Chow does, she then has the winning hand. She would, again, win every region and take 44% of the vote, including 60% in old Toronto. Ford would take 28% and come a close second in Scarborough (36% to Chow's 40%) and North York (31% to Chow's 36%). Stintz is hurt more by Chow's candidacy than she was with Tory's, as she would drop to third with 22% of the vote.

If both Tory and Chow join the fray, the election would appear to be primarily a contest between those two. Chow would win with 36% of the vote, taking a majority in Toronto and winning Scarborough, while Tory would capture 28% of the vote and prevail in Etobicoke, North York, and York/East York. Ford would place third with 20%, doing no better than 24% anywhere in the city, while Stintz would fall to fourth with just 13% support.

In none of these scenarios is Rob Ford even close to winning. Fully 50% of Torontonians said they not vote for Ford under any circumstances, meaning his pool is quite small. Another 13% said they somewhat agreed that they would not vote for him in any circumstances, reducing his potential pool of supporters even further. Really, his base is the 19% of respondents who strongly disagreed that they would never vote for him. This seems to be confirmed by his bottoming out at 20% in the final scenario. There is simply no winning hand for Ford in this poll.

The survey does include a great deal of information on who each of these candidates' supporters are. Using the crosstabs from the final, all-in scenario, we can profile their average supporter.

The remnants of Ford Nation appear to be men over the age of 55 who have a household income of $40,000 per year or less, and have at most a high school diploma. Stintz's typical supporter also makes less than $40,000 per year, is between the ages of 18 and 34, and is high school educated.

Polls like this showing Ford's vulnerability will certainly not deter new candidates from joining the race. Chow seems to have the widest appeal and greatest potential to win, but John Tory could also make a good run for the job - particularly if Ford's numbers continue to slide.

Among the most committed voters, as well, both Chow and Tory tend to do better while Ford's numbers generally decrease. Among the most committed voters, Stintz beats Ford with 55% to 32%, Tory beats Stintz and Ford with 45% to 30% and 20%, and Chow beats Ford and Stintz with 45% to 29% and 20%. With a full deck, Ford drops from 20% to 19% and Stintz from 13% to 10%, boosting Tory from 28% to 32% and Chow from 36% to 37%. This suggests that in an actual election, the race would really be between Tory and Chow even more than the general numbers show. That would be an interesting race - and fears that Rob Ford could slip through the middle would be unfounded.
Posted by Éric at 10:15:00 AM