Is Mulcair's QP performance paying off?

The problems regarding the PMO and Mike Duffy have certainly hurt the Conservative government, but the performance of Thomas Mulcair in Question Period has played a big part in the Prime Minister's discomfort. While Mulcair stole the show, Justin Trudeau reaped the benefits in the polls. Until now?

Considering the results of Ipsos-Reid's latest poll, as well as his improving approval ratings recorded by EKOS Research, it is a question worth asking. 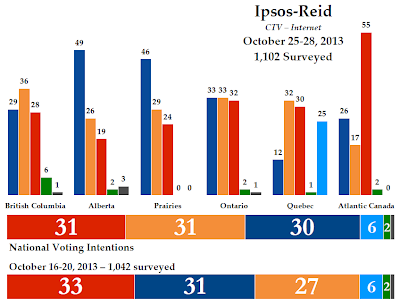 Ipsos-Reid was in the field between the first and second explosive speeches made by Duffy in the Red Chamber, so the fallout from his last set of allegations (if there will be any) have yet to be fully recorded. Nevertheless, the poll has some interesting results.

(Ipsos-Reid also polled between Oct. 16-20, before the Senate scandal blew up again. The national results of that poll have been included in the lower bar in the chart above.)

The Liberals and New Democrats tied for the lead in the poll with 31% apiece (if you're wondering why I decided to put the Liberals first in the chart, it is because Ipsos had 263 people in their survey supporting the Liberals and 262 supporting the NDP - it is just that close!). Compared to their pre-Duffy polling, that represented a drop of two points for the Liberals and a gain of four points for the New Democrats. Those shifts are within the margin of error (of a probabilistic sample). The Conservatives dropped a single point to 30%, putting them in third place for the first time since, I believe, ever (at least for this current version of the party).

The Bloc Québécois had 6% while the Greens had just 2% support. 1% of Canadians supported another party and, by my estimate, 21% of those sampled were undecided.

It is perhaps more instructive, however, to look at Ipsos-Reid's previous poll from mid-September. Since that poll, both the Tories and Liberals dropped two points but the NDP picked-up five: that is outside the margin of error, suggesting that the New Democrats are really making gains.

This is certainly a great poll for the NDP, who have not led or been tied for the lead in any survey since October 2012. A word of caution, though, as Ipsos-Reid finds the NDP's supporters to be less committed than those of the Liberals and Conservatives. Two-thirds of their supporters were absolutely certain they would vote in an election (barring an emergency), compared to 58% for the NDP.

The source of the NDP's gains appears to be Ontario. The party tied with the Conservatives with 33% apiece in the province, a gain of eight points since September (the Liberals were at 32%). That increase was outside the margin of error, and the only shift since either the pre-Duffy or September poll to be outside the margin of error at the regional level anywhere. But with the exception of Atlantic Canada, the NDP did make modest gains throughout the country.

In Quebec, the NDP was up to 32%, putting them ahead of the Liberals, who were down to 30%. The Bloc Québécois fell to 25%, while the Conservatives were at 12%.

The New Democrats also led in British Columbia with 36%, followed by the Conservatives at 29% and the Liberals at 28%. The Liberals led only in Atlantic Canada, with 55% to 26% for the Tories and just 17% for the NDP.

It is also worth noting generally that this Ipsos-Reid poll stands out for having the Liberals low and the NDP high, particularly in Ontario. We will have to wait and see whether other polls will confirm that the New Democrats are making gains.

These levels of support would yield an interesting House of Commons. The Conservatives would likely win some 121 seats, with the NDP and Liberals tying with 104 apiece (if you're now wondering why I have the NDP in second in the chart, it is due to the convention that parties maintain their previous role occupied in the House in the case of a tie). The Bloc would take eight seats and the Greens would win one.

The Conservatives benefit from the divided opposition in Ontario, winning the plurality of seats in the province. They also put up good numbers in the West, but lose quite a few seats in B.C.

The New Democrats win the majority of seats in Quebec and manage a strong performance in Ontario and British Columbia, along with a smattering of seats on the Prairies and in Atlantic Canada. The Liberals win most of their seats east of Manitoba.

It is hard to imagine that the Conservatives would be able to govern very long, if at all, with this sort of result in the House of Commons. But it is also hard to imagine what the Liberals and New Democrats would do. Govern in tandem? With a tie in both popular vote and seats, who would take the lead in such a coalition? Would Mulcair or Trudeau be Prime Minister? The most likely result, in the end, might be another election to settle the matter since there is no other simple solution.

The poll by EKOS Research, done over most of the same days as Ipsos-Reid, had a very different result: 37% for the Liberals, 26% for the Conservatives, and 25% for the New Democrats. The numbers, even at the regional level, were broadly similar to their previous poll from earlier in October, which I analysed here. Interestingly, EKOS shows that Mulcair's approval ratings have soared to almost 50%, a big change from previous polls, both their own and those by other firms.

But there is something that is important to note with the EKOS Research poll. Brought upon by questions asked by Abacus Data's David Coletto, Frank Graves of EKOS wrote up an explanation of why his latest poll was heavily weighted towards university graduates, to the tune of almost three times the number it should have been compared to the census. I have brought up the problems related to over-sampling one group before (most recently here), but the potential issue with the EKOS survey is that the poll was not weighted by education at all, meaning that the poll is skewed towards those with a higher level of education (rather than just having the risk of the lower-sampled groups having their errors magnified by inflating their weight).

Coletto found that if the sample was weighted according to the census results for education levels, the results would be dramatically different: 33% for the Conservatives, 32% for the Liberals, and 24% for the NDP. This would bring the poll's results much more into line with what Ipsos-Reid, Abacus Data, and Harris-Decima have recently recorded. The same would happen with EKOS's previous poll in September.

Graves's response to Coletto's concerns is laudable. It is hard to imagine many other pollsters being so open with a methodological issue like this, and we should applaud this degree of transparency. It is far too rare in the industry.

The main element of Graves's response is that respondents are known to inflate their level of education - a high-school dropout becomes a high-school graduate, a college degree becomes a university degree, a few years at Trent becomes a bachelor's, etc. That makes this more difficult to compare a survey's education-level sample to the census than, say, gender or age. Graves suggests re-weighting his sample to a different proportion for education, with 45% being university educated instead of the 22% from the census or the 62% from his poll. The results change accordingly: 35% for the Liberals, 29% for the Conservatives, and 25% for the NDP.

I'm not sure I quite agree with Graves's re-weighting approach, as it would seem to make a lot more sense to bring the numbers much closer than that to the census. But I do understand his concerns with the difficulty in getting accurate responses (if you weighed a poll by ethnicity, what do you do with all those people who impossibly say their ethnicity is Canadian?). On the flip side of the coin, though, if the sample itself cannot be trusted, why report the results for that particular category? Are university graduates more likely to support the Liberals, or only people who falsely claim to be university graduates? How useful is that information?

If the results were broadly similar across the different educational levels, this would not be an issue at all. But since they are significantly different, and have been for some time since Trudeau's surge, this is an important issue. I would suggest that EKOS weigh their polls more with a nod towards educational levels than they have in the past, since it seems to be a leading indicator of how someone will vote: 42% of self-proclaimed university graduates support the Liberals, compared to 28%-29% of the rest of Canadians in the EKOS poll. The NDP's support was mostly uniform, while the Conservatives get 36%-37% support among lower educated voters, and 21% among university graduates.

Another point Graves's brings up, which I do agree with, is that pollsters need to draw a line of what to weigh a sample by. Any number of factors could be chosen - should you weigh a poll by beer preference according to market share? But education is a rather basic measuring stick and, perhaps more relevantly, it is a category that EKOS itself reports.

On that score, the sort of concerns brought up by Coletto and on this site in the past give pollsters good reason to limit the amount of information that they release with their polls. Why run the risk of some pesky nerd poking holes in your work? There is, of course, a big difference between the right thing to do and the easy thing to do. EKOS is doing the right thing, and the openness with which Graves approaches methodological issues gives me more confidence in his work than it would otherwise. Other pollsters, including some of the most important ones in Canada, are asking us to take their numbers on faith. We should instead be expecting and demanding the degree of transparency we get from firms like Abacus Data, Ipsos-Reid, and EKOS Research.
Posted by Éric at 10:58:00 AM