In my post positing four hypothetical scenarios, someone asked what it would have looked like if the Conservatives were still split. So, without a poll in sight, I've tackled that question.

Obviously, this isn't a perfect simulation. But it gives us a good idea of what it would've looked like if Peter MacKay had not merged his party with the Canadian Alliance, all other things being equal. 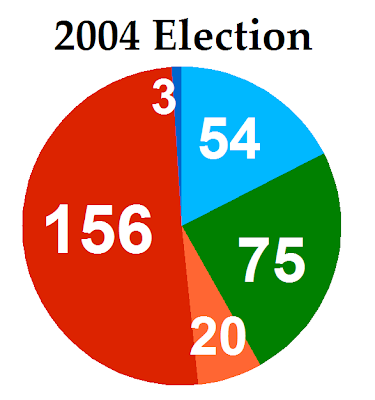 In the 2004 election, the Liberals are elected to another majority government under Paul Martin, which comes as no surprise. But the majority is very slim.

The Canadian Alliance under Stephen Harper increases its caucus to 75 MPs, the most it has ever had. Thanks to the sponsorship scandal, the Bloc returns to prominence in Quebec with 54 MPs, while new leader Jack Layton wins seven more seats for the NDP. Peter MacKay, leader of the Progressive Conservatives, is given a thumping and is reduced from 12 to 3 MPs, all in Atlantic Canada.

The Liberal strength is in the east and in central Canada. In Ontario, the party wins 90 seats, while Atlantic Canada and Quebec provide another 47. Only 19 seats come west and north of Ontario.

The Canadian Alliance wins only eight seats in Ontario, with 67 MPs coming from Western Canada.

However, after less than two years in government, the Liberals lose some MPs to retirement and floor-crossings, and in late 2005 the Paul Martin government - now a minority - falls and Canadians head to an election. 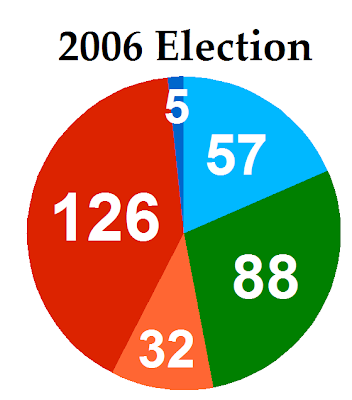 Stephen Harper of the Canadian Alliance manages to change the game during the Christmas break with promises of 'Open Federalism' to Quebec. On election night, Paul Martin is elected to a minority government with 126 seats. Canadians begin to wonder how such a small minority government will actually work.

The Liberals see losses in their core regions, dropping to 73 seats in Ontario, 13 in Quebec, and 22 in Atlantic Canada. Martin does, however, win two more seats in the Prairies.

Harper makes big gains for the Canadian Alliance and bumps his caucus up to 88 seats. He manages to take five seats in Quebec, mostly around Quebec City. He also makes a breakthrough in Ontario with 20 seats, but the bulk of his caucus (63 seats) is still west of Ontario.

With a three-way split of the federalist vote in Quebec - four if you count the NDP - Gilles Duceppe wins 57 seats in Quebec, the most his party has ever won.

Jack Layton has another successful election with 32 seats, 13 of them in Ontario and another 10 in British Columbia.

After stepping down as leader of the Progressive Conservatives, Peter MacKay is nevertheless re-elected in Central Nova and new leader Bill Casey wins two more seats for the party in Atlantic Canada. Under Casey's leadership, the Progressive Conservatives are increasingly becoming focused on Maritime issues, added by the presence of PC provincial governments in New Brunswick, Nova Scotia, and Newfoundland.

In 2008, hugely unpopular and faced with an unworkable minority, Paul Martin decides to step down as leader of the Liberals and Stéphane Dion is elected leader of the party and becomes Prime Minister. Shortly thereafter, the opposition joins together to bring down the government. 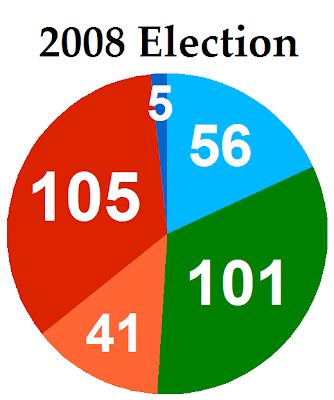 The country is more divided than ever, as Stéphane Dion wins the slimmest of minority governments with only 105 seats. Outnumbered by even the Canadian Alliance and Progressive Conservatives, Dion approaches Jack Layton and the two enter into a minority coalition government.

Dion managed to maintain his office with seat wins in the east. He takes 21 seats in Atlantic Canada, 15 in Quebec, and 56 in Ontario. Only 13 MPs in the Liberal caucus represent the West and North.

Jack Layton's 17 MPs in the North and West increase the government's representation in the region to 30. Overall, Layton wins 41 seats for his party, 18 of them in Ontario and 10 in British Columbia. He even elects one MP in Quebec and one in Alberta.

Stephen Harper remains as Leader of the Official Opposition, increasing his party's caucus for a third consecutive time with 101 seats. He wins 12 more in Ontario for a total of 32, while his Quebec caucus is reduced by two to three seats and the party finally wins a seat in Atlantic Canada. Again, the majority, or 65 seats, are Westerners.

Gilles Duceppe benefits once again from the federalist split and takes 56 seats, losing only one from 2006's result.

Bill Casey manages to keep his five seats in Atlantic Canada and the party's provincial wing maintains its hold on New Brunswick, and looks likely to stay in power in Halifax.

Will the Dion-Layton coalition last long? Pundits think it won't. More and more conservative thinkers are pushing for a merger of the Progressive Conservatives and Canadian Alliance, but the PCs are poo-pooing the idea as the Canadian Alliance is not considered open to their regional issues. However, there are doubts that even a merged Conservative Party would be able to defeat the Liberals and NDP, who have agreed to work together and would undoubtedly merge themselves if a Conservative Party appeared.
Posted by Éric at 10:12:00 AM