We have not heard much out of the federal polling world since the Quebec election took centre stage, and federal politics are likely to fade to the background again if Ontario heads into an election campaign next month. In the meantime, however, the latest poll from EKOS Research for iPolitics suggests the Conservatives have yet to rebound. 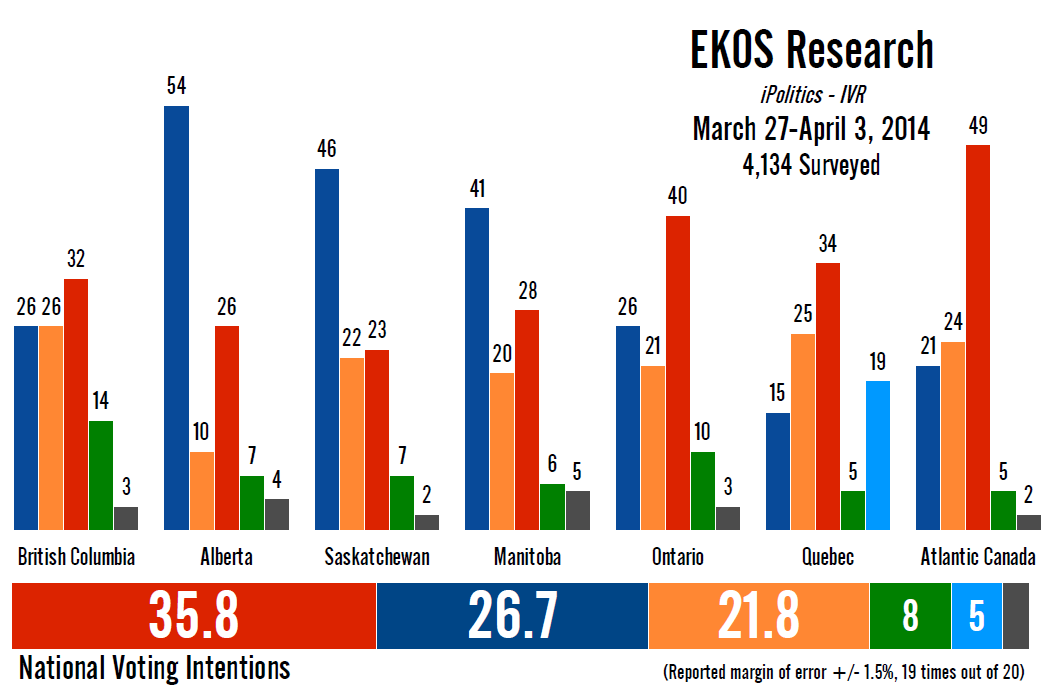 Only the drop in support for the Conservatives appears to be statistically significant.

This is generally the status quo, then, for federal politics since last fall. The number for the Conservatives is quite low, though EKOS generally has support for the larger parties lower than other firms due to higher Green and Others numbers.

In Saskatchewan, the Conservatives led with 46.3%, while the Liberals and NDP followed with 22.9% and 22%, respectively.

All in all, nothing too unusual in these regional numbers. However, the large Liberal lead in Ontario is somewhat out of the ordinary.

With these levels of support, the Liberals would likely win about 155 seats, putting them 14 short of a majority. The Conservatives would win 111, while the NDP would take 63 seats, the Bloc would hold seven, and the Greens would win two.

The Liberals do exceptionally well in Ontario, taking 73 seats with just 31 going to the Conservatives. They also win a majority of seats in Atlantic Canada with 23. The party takes the plurality of seats in Quebec with 34 and British Columbia with 14.

The Conservatives still do best west of Ontario, with 13 seats in B.C., 20 in the Prairies, and 30 in Alberta. The New Democrats take 26 seats in Quebec, with another 17 coming from Ontario and 13 in British Columbia.

EKOS also probed the approval ratings of the three main leaders, finding Justin Trudeau and Thomas Mulcair to have the highest approval scores at 41.3% and 39.5%, respectively. Trudeau had a higher disapproval rating at 34.2% to 23.7% for Mulcair, but Mulcair had 36.7% either not having an opinion or not responding. That compared to just 24.5% for Trudeau and 19.5% for Stephen Harper.

The numbers have yet to come unstuck, as Trudeau celebrates his first full year as leader of the Liberal Party. Over that time, he has not relinquished the national lead in the polls. But can he hold it for another 18 months?
Posted by Éric at 9:52:00 AM