Last night's provincial election results in Quebec were most certainly positive for pollsters. They called the race correctly, judging the Liberals to be in a majority position, the Parti Québécois to be dropping significantly, and the Coalition Avenir Québec to be making gains. The final polls were off by no more than a handful of points in any direction, while the aggregate performance was within two points for each of the major parties.

The projected vote results for the Liberals, CAQ, Québec Solidaire, Option Nationale, Greens, and other parties/independents all fell within the likely ranges. Only the PQ's result of 25.4% fell outside even the 95% confidence interval, indicating just how poorly the party did.

The seat projection model performed well for the Liberals, giving them 69 seats (or between 60 and 78) when the party actually won 70. For the PQ, CAQ, and QS, however, the 95% confidence interval ranges were required to capture the eventual results. The PQ was projected to take as few as 29 seats, and they won 30. The CAQ was projected to win as many as 23 seats, and they won 22. These errors occurred because of the CAQ's performance around Montreal at the expense of the PQ. Of the 10 riding-level errors where the ranges did not identify the correct winner, nine of them were seats expected to go to the PQ that actually went to the CAQ. And seven of them were in the greater Montreal area.

This wasn't the fault of the polls, exactly. The regional numbers, as an aggregate, were actually quite good. Rather, it was that the CAQ won these Montreal-area seats by the skin of their teeth. A projection model can falter if a party manages to win a lot of close races.

Overall, the right call was made in 82.4% of ridings, or 103 of 125. In those 22 errors, the confidence in the call averaged just 57.6% - so most of them were genuine toss-ups. Nine of them, actually, were called with 50% or 52% confidence, and more than half of them with 59% confidence or less. The worst call was in Masson, which was projected to go PQ with a 73% chance. That was the only case of the confidence being over 69% and being wrong.

The likely winners through the projection ranges were identified in 92% of ridings, or 115 of 125. Considering the scope for error at the local level, I think that is a very positive result. 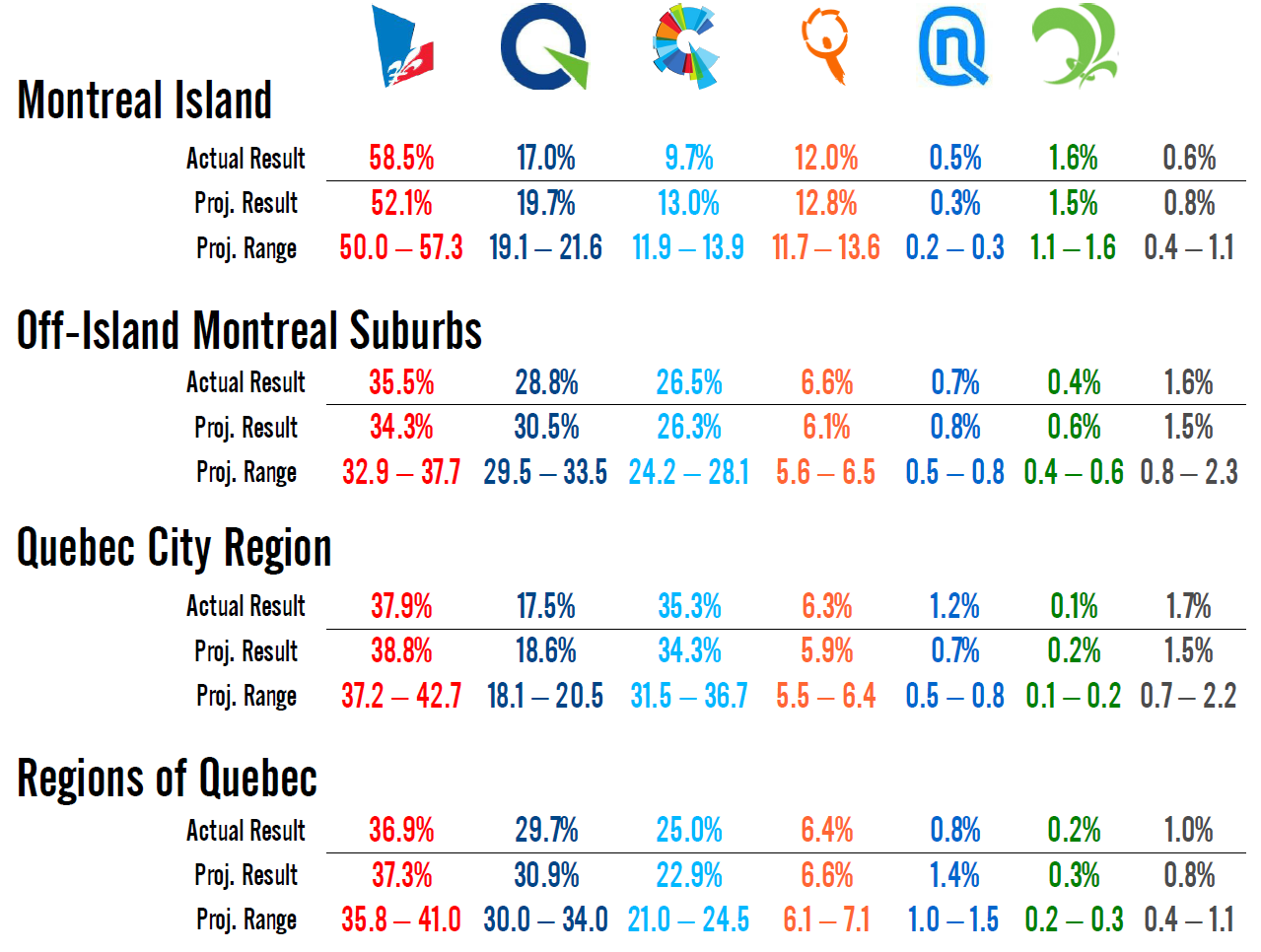 The chart above compiles the regional results of last night's election, compared to the projection. As you can see, the aggregate of the polls was quite close across the board.

The Liberals only greatly out-performed the polls on the island of Montreal, where it won them just one more seat than expected. They took 58.5% of the vote here, compared to the 52.1% that the polls suggested. The PQ took 17% instead of 19.7%, while QS took 12% (tying their 2012 performance) instead of 12.8%.

Quebec City was also quite close, with all parties projected to within 1.1 points. The Liberals won the region with 37.9% of the vote to 35.3% for the CAQ.

As an aggregate, of course. Individually, there were mixed performances. Forum did very well in the Quebec City and Rest of Quebec regions, averaging 1.4 points of error per party or less. It averaged 2.9 points per party of error in the Montreal area, but that is still quite good considering the margin of error for smaller sample sizes.

Léger was within 1.6 points per party in Quebec City and the regions as well, but was 3.8 points off per party around Montreal.

There was no breakdown of likely voters by region in the Ipsos poll, so it is hard to gauge. But the poll of eligibile voters did well in the regions of Quebec (2.9 points per party), but less well in the rest of the province (between 5.4 and 6.8 points per party). EKOS and Angus Reid both repeated the errors in the Montreal region that other pollsters did. GOTV operations may have been a factor here.

With all the tight races, how would the model have done if the polls for the four regions defined by the model had been even more accurate? 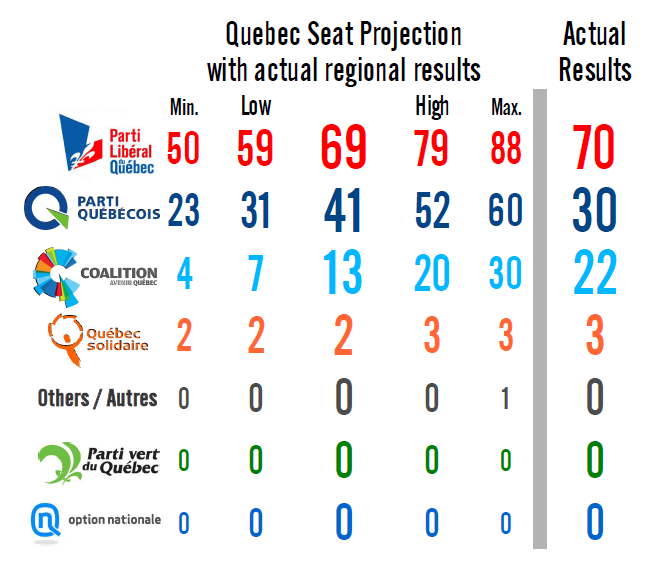 This should not be shocking - there was a 20.5% chance (or about one in five) of the CAQ having its result fall above the high projection band. But there was only a 7.5% chance that the PQ's result would fall below the low projection. That an incumbent government under-performed to such a great extent says more about how motivated the PQ's supporters were than it does about the projection model. It also shows how well the CAQ did - under normal circumstances, they should not have been able to win all those close races.

The chart to the left shows the projected results at the riding level with the actual regional results plugged into the model. You'll see that in many cases the numbers are quite close.

The six ridings in which the winner would not have been identified by the likely ranges were Borduas, Chambly, Iberville, Masson, Mirabel, and Saint-Hyacinthe. It is no coincidence that these were all CAQ victories in which the PQ was favoured. It is also no coincidence that they were all actual pick-ups by the CAQ in the same region of the province. There was a serious and disproportionate CAQ gain in these regions that went over-and-above what should normally be expected to happen.

This marks the second consecutive election in which the polls do a good job of tracking a race, making all the hard work put into this site worthwhile. The seat projection model performed decently with the polls, and very well with the actual results. In my view, the difference between the results and the model tells us something about what happened last night, rather than about the errors of the model itself. If humans behaved in a way that was uniform and easy to predict, models like mine would be right in 99% of cases. It is where it is wrong that we see real politics at play.
Posted by Éric at 12:32:00 PM